We found 19 Reddit comments about A Practical Guide to Linux Commands, Editors, and Shell Programming (3rd Edition). Here are the top ones, ranked by their Reddit score. 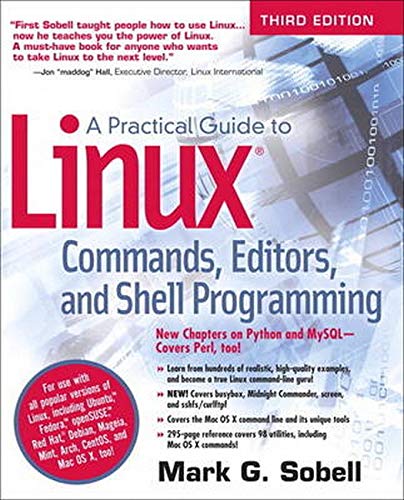 The approach I took is to start with commands and languages using regular expressions: find, grep, sed, awk, python or perl, etc. These are very powerful and useful commands.

These all are excellent, and very useful.

This book does a pretty good job of introducing you to a lot of aspects of the wide world of Linux computing. I recommend it along with Ubuntu starting out.

EDIT: Removed referral code that I didn't put there.

There are really too many to list; I'd highly recommend checking out A Practical Guide to Linux Commands, Editors, and Shell Programming (3rd Edition) by Mark Sobell. It got me started on working from the command line and helped me move from a Help Desk position to a Sysadmin job a few years ago.

If you're into paper:

I'm going to recommend Mark Sobell's fantastic Practical Guide to Linux Commands, Editors, and Shell Programming. It goes beyond just basic shell scripting and also dwells into areas such as Vim, Emacs, Regex, and Awk, which supplement a knowledge of the shell greatly.

It also particularly works well as a reference-style book.

I don't recommend either of those books, try these instead:

I am reading the first edition now and it is really good so it can't hurt. It is a great into, and a good reference even for people who know what they are doing.

An earlier edition of this book was my text in college. Super handy book, I keep it on my desk at work to this day. The newer version was even reviewed on Slashdot.

+1 for devops. Anyone looking for a reference manual for Linux should check out Mark Sobell's books. Really useful and doesn't become obsolete after a year (or even 10 years!). Just got his 3rd edition Linux manual for Christmas and I'm ecstatic.

laptop huh what when i went to school for cs we used punchcards....

but in all seriousness, writing code is about the equivalent of writing text in a text editor. get something w/ decent battery life and comfortable screen size; any modern machine is likely more than enough to run and test all or most assignments from CS courses, save some specialized topics, in which case the univ. probably provides resources you'll need.

what matters more than the hardware is the environment you work in. do yourself a favor, wipe out windows and put a linux distro on it (or dual boot, you big sissy!!); start with ubuntu or fedora if you're new to linux, and deep dive in. force yourself into the command line. A Practical Guide to Linux from Mark Sobell is an EXCELLENT book for learning raw, distro agnostic Linux from the command line/shell perspective (http://www.amazon.com/books/dp/013308504X I have the 2nd edition, I'm sure the 3rd is great).

Learning how to truly use a computer and work w/ the operating system instead of around it is crucial, esp. if you want to go into engineering as you mentioned below. I won't rant any further but when you get into industry you'll be glad you have practical experience w/ *nix operating systems. As far as school goes, it will increase your productivity and workflow, as linux/unix is the environment developed by programmers for programmers to do productive programming first and foremost, and is generally better at everything else too.

I'm a Windows admin who wanted to learn more Linux. I asked a friend the same question as you recently. He recommended A Practical Guide to Commands, Editors and Shell Programming by Marc Sobell as well as Web Operations by John Allspaw and Continuous Delivery by Jez Humble. He recommended I start with Sobell's book before moving on to the others.

:/ I haven't had much time to actually read any of this, but I trust his advice.

The class is intro to Linux so we don't work with a specific language but here is the book.

Thanks for steering me away from that. I'll check out that list from /u/va_network_nerd. I've currently been going through a book by Mark Sobel here
Seems good so far, but I'm only a few chapters in.

This book is how I first learned. https://www.amazon.com/Practical-Guide-Commands-Editors-Programming/dp/013308504X

Here is the book had had us use. Pay careful attention to the sed, awk, and perl sections. There's a ton you can do with perl, and Maynard is very specific on what he wants everyone to focus on. He'll give you a tiny packet on what you'll need to know. The low level C part is pretty crazy, but he'll give you enough rope to hang yourself.

You will be writing programs for the tests. It will range from writing a script, to writing a function, to writing an entire program. It's hard to describe Maynard, honestly. For instance, on one of my tests I switched my dup2() statements effectively switching input/output. He took off 10 points out of 25. On certain topics he'll want to make a point and be very heavy handed with the grading. The programs especially.

The good news is that all of the quizzes, programs, and tests really don't matter. The final does. I got an 82 on the first test, 42 on the second, and subpar on all the programs. Got an A in the class because I beasted the final. As long as you dedicate 50% of your time that semester to Systems, and the rest of the time for everything else, you'll do fine.

I can't recommend this enough. It's about as comprehensive a guide to Linux as you could hope for, and accessible for beginners.

As far as distros go, I'd go with Mint. It's a great community-driven distro that's very user friendly.

Hey, no problem man. The source for this particular script is kind of mediocre, but it is here. Note that I included a file called "wow," to get the shell to respond when I typed "wow, real mature, shell".

I want to also mention that when I was learning shell scripting, I made a shell script with a ton of comments to help me understand stuff better. That is located here. And also, for fun, here is a shell script I wrote to make the mouse pointer touch every pixel on your screen. For further learning, I really can't reccommend Mark Sobell's "A Practical Guide to Linux Commands, Editors, and Shell Programming (3rd Edition)" highly enough. It really brought my practical Linux knowledge to a much higher level. I think you can Google that book and get the 2nd edition in pdf form somewhere.