We found 7 Reddit comments about Advanced Macroeconomics (The Mcgraw-hill Series in Economics). Here are the top ones, ranked by their Reddit score. 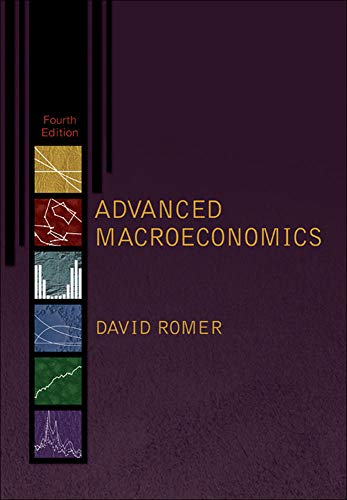 7 Reddit comments about Advanced Macroeconomics (The Mcgraw-hill Series in Economics):

Paul Romer did not write my macro textbook. David Romer did. No relation. Is there another textbook you are thinking of? The David Romer one is the classic as far as I know.

Paul Romer, in that paper, takes aim at RBC. Rightfully so. I agree with the RBC critique wholeheartedly. Any graduate student knows the limitations of RBC (or should anyway).

I largely agree with this poster who actually had a well thought out response to the paper. It's a good counterpoint.

How you responded certainly made you seem so. He made sense to me, but maybe that's because I have formal training in economics.

Keynes knew his model was not perfect, but he also knew that his model had implications in the short run. His quote actually refers to his belief that inflation could not be controlled without government intervention.

I've picked these texts as they are ones that I ran across in the year I spent as a masters student, or in advanced economics classes when I was an undergraduate/undergraduate tutor.

Hal Varian, Microeconomic Analysis Relatively outdated graduate level textbook in microeconomic theory. I'd imagine his intermediate book would prepare you well for this text. It requires understanding of partial derivatives and some matrix notation to get through, but compared to today's texts comes off comparably light. I'd imagine it'd old and used enough that there exists comprehensive answer guides online that you can track down.

David Romer, Advanced Macroeconomics Romer's Advanced Macroeconomics is used in some undergraduate programs, and some masters/graduate programs. Again, compared to standard texts, it is wanting, but does a good job of covering many of the introductory models that are used in modern economic analysis. This text requires knowledge of at least single variable integration (might require multiple in the later chapters, but when I was tutoring students with it classes never got that far), and the usual multivariate calculus.

Jeffrey Wooldridge, Introductory Econometrics: A Modern Approach this was the textbook that I first saw econometrics through, and I still think its a fantastic applied text. It has a decent mathematical appendix covering some probability and math topics required for the text. On the flip side, the text gives you some pretty good how-to methods to implement a lot of the common econometric techniques and some intuition behind why they are used.

Simon &amp; Blume, Mathematics for Economists This text is usually used in graduate programs math camps as a book saying "you should feel comfortable using these techniques before entering the program." Covers a wide range of topics from calculus, optimization, and linear algebra, to differential equations and some topics in real analysis. It has a fair amount of exercises to work through, and again, the book has been used enough that answer guides may be available online.

As you've probably heard, graduate school is very mathematical, and very little that I learned in intermediate micro ends up bridging the gap outside of some of the intuition I gathered through it. Most of the books I cited above are a solid jump up in difficulty from most intermediate books I've seen, and still a solid jump away from the common PhD level texts (Mas-Colell, Whinston, and Green "Microeconomic Theory". Sargent and Ljungqvist "Recursive Macroeconomic Theory". Greene "Econometric Analysis", respectively).

As a result, depending on what you plan on doing in the near to short term, its usually better to take more calculus, linear algebra, and other mid level mathematics classes.

You're very welcome. Feel free to ask if you have any questions. These would be a good start