We found 16 Reddit comments about ARDUINO UNO R3 [A000066]. Here are the top ones, ranked by their Reddit score. 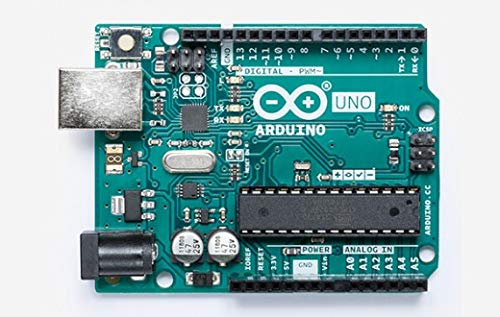 This board is your entry to the unique Arduino experience: great for learning the basics of how sensors and actuators work, and an essential tool for your rapid prototyping needsArduino Uno is the most used and documented board in the world"Uno" means one in Italian and was chosen to mark the release of Arduino Software (IDE) 1.0, now evolved to newer releasesIt has 14 digital input/output pins (of which 6 can be used as PWM outputs), 6 analog inputs, a 16 MHz quartz crystal, a USB connection, a power jack, an ICSP header and a reset buttonArduino is an open-source hardware, software, and content platform with a worldwide community of over 30 million active users
Check price on Amazon

I term of parts I actually purchased at the time:

I used a 9-volt battery to power the entire thing. I took advantage of the Educatos power output pins to power the servos. Since there is no on/off switch I spliced one into it so I wouldn't passively drain the batter.

I took a FastLED library example for the Arduino and modified it to change the LED colours based on serial input, then wrote a little C# console program that polls the LibreNMS API for alerts and sends a "green", "orange" or "red" to the serial port.

Edit: Balls to it. Uploaded the code on Github.

Yay, I'm glad it's not stupid to everyone! The actual device is an Arduino Uno microcontroller and a TFT LCD touch screen that I happened to have around. She's currently using injections since she's only been diagnosed recently and because pumps are expensive. I'm hoping to add automatically changing ratios based on time but it's probably a ways off.

Eh, it will. But tbh it's overkill. Save that $10, go get a hoagie and pick up one of these

I highly reccomend if you want to get into the world of programing to just go and purchase an Arduino uno for 20ish bucks. These little guys are cheap but extremely powerful. You can basicly hook anything you can dream of up to it and is designed to teach you how to program. The programing software is free and starts you out with beginer programs that slowly get more advanced. The first program "blink" has you insert a single LED, and then change the speed it flashes using the program.

I dont remember the syntax off hand but it looks like something as easy as:

When i started with the blink program I had zero knowledge of programming. Withing a week I built a 3x3x3 LED cube. After another week my program would do different things with the led for about 10mins before restarting.

Now I just use them for silly ass projects liking making my beard glow when I DJ or go to dubstep raves.

You have a lot of choices.

Ultimately it looks like you want to use physical relays (most allow signals up to 250V). You could either use a dedicated multiplexing board (The board is wired such that only one path is connected at a time), or you could use a bank of relays and wire them so that all their common outputs are tied together, and then you just write code that only allows for one connection at a time.

What's most important to you, Cost or Hardware quality?

If cost is important, go for an arduino + relay board, like this...

The cheapest thing to control it would be something like an arduino microcontroller:

You would write you code in LV, which would use a serial message to control the arduino. The arduino has digital outputs that would drive the relay board.

The code on this is not terribly complicated, but you would not be using DAQ drivers, but the VISA serial messaging and you would have to deal with a USB com port on the PC. This adds a little complexity and possible failure mode. This is what I would use in my own home for an inexpensive, non-critical application. You can even get cheaper controllers and relays, but we're talking $40 here.

Another advantage of the arduino is that you could put a fairly simple protection circuit into the controller code, so that if something goes wrong at the PC level or you generate a bug that the relays can shut down or be more sure that they won't short circuit two paths.

To go the other route, where money is no object (or you need a very robust, mission critical system) and want overly simple programming, you could go with an NI relay board on a PXI chassis. That's going to run in the thousands of bucks, but if I was shipping this off to China on a test rig that I never wanted to have to fix, that's what I would use.

In a local environment where I could easily support a problem (and a problem wouldn't cost us $50K a day), for an employer that would want a compromise between cost and my time, I would probably use an NI-USB 9174 chassis + 2 9482 relay modules. This will run about $1200, but is reasonably robust and very simple to program and is practically plug-and-play in terms of hardware. Remember that to a reasonably sized employer, you cost about $100/hr considering benefits and such. So if you can save 4-8 hours of learning/programming/debugging/wiring/soldering, it's a wash.

Lastly, I recently saw an Industrial Arduino, which is a relatively inexpensive way to get the cost down but beef up the hardware, for about $200. With one of those, I would not use that cheap relay board, but probably find a set of DIN mount discreet, industrial relays, about $20-50 each.

If this was the solution, I would spend some time to figure out how to talk to the arduino over some other method of communication, other than USB. It's been my experience that USB can be a source of pain in the ass-ness. Driver updates can break things, plugging something else in can break things, hubs can cause headaches, even certain brands of PC come with shit USB controllers that refuse to play nice once in a while.

IF you do use PC + USB in a production environment (which I have done, many times), I suggest buying a dedicated PCI/PCIe USB controller (and get a couple replacements), so that you are not at the mercy of shitty motherboard design or having to deal with driver changes if IT tells you you have to change out the PC.

(OK, I'm getting ahead of myself here)

Note: For all of these solutions, even the serial programming is simple, so it's really about how stable/robust the hardware is. With the arduino, you are relying on relatively inexpensive non-industrial boards that have a relatively high failure rate, along with a bit of your own wiring and a separate code base on the controller. That's not necessarily bad, but I wouldn't send that up on a satellite- and I have actually programmed QA for satellite parts- that's when you spend $10K to get a bank of relays that you don't have to worry about.

That's a great quote. Thanks for sharing it. Nowdays it's pretty tough to get shocked, even on a TV. Things are more power efficient so they don't have these huge capacitors that take forever to discharge after being unplugged. I've never once been shocked working on hardware. Ever.

You can literally jam an LED in to the analog ports, and just map it to the pins you use. You program it in C++, it just has some special functions that come with the board. But that's it. I used to be like you, but now I build and repair 3d printers for a living. Programming something in software and seeing a physical/mechanical output is very satisfying. It's as easy as motor1.rotate(360); or led.brightness(100); in software, and plugging things in is as easy as plugging a fan in to a motherboard, the sockets are all pre-formed so you don't need to solder or anything.

You might want to avoid a blob of 12 wires are the battery. Maybe chain them with y-cables. I'd include a schematic, but I'm away from my computer right now. Essentially, yes: you will connect each ESC to power and ground. You will also connect a signal cable (the white one) to the Arduino. I'm pretty sure you will connect the signal cable power (the red one) to your 6V battery as well.

Your servo will not need an ESC. The servo cable will have 3 wires, typically white, red, and black. The white wire will go to one of the PWM pins on the Arduino. The red will go to the positive of the 6V battery, and the black to ground.

You should have the following connections, not counting your accelerometer/gyro:

Maybe instead of just learning programming you should think about embedded systems programming (lower level stuff that interacts directly with hardware) or even computer engineering? As a developer, the more you know about how hardware works the better, IMO. However, it's certainly not required, and not even extremely relevant at many/most jobs.

Have you come across the Arduino yet? It's a low powered embedded systems processor that you can plug in to your PC and program. It's also a small and relatively simple processor, so it's actually feasible to understand the entire thing; in fact the manually weighs in at (only!) about 800 pages IIRC.

Thank you for your time. I want to power this two pumps using as less needed hardware as possible. https://www.amazon.de/gp/product/B0721JLQG9/ref=ox_sc_act_title_4?smid=ADNI1MM5F189O&amp;psc=1

I thought of a Uno? The Arduino later should connect to a MySQL from the WEB to check if it should run the pumps or not.

It would be very awesome if you can give me a short list of all needed hardware for this (I have wires, solder etc.).

What I found so far:

I rushed through ordering the stuff and realized I need an Arduino? Will this one work? https://www.amazon.com/Arduino-Uno-R3-Microcontroller-A000066/dp/B008GRTSV6/

Edit: Or is the "Arduino" actually the keyboard in this case?

I'd say this is a pretty ambitious first project, but what better way to learn than to fail until you succeed. I did this project for a friend on a 75" tv. Honestly to do this for your computer you wouldn't use a raspberry, you would use your computer as the "brain" instead of a pi. Here's the links i used to do the tv project, there's youtube guides for pc using an arduino, you can reverse engineer these links to get you somewhere.

Get a plain vanilla Uno

A search for "arduino temperature controller" yielded this, though I'm not familiar with this particular project.