We found 47 Reddit comments about Azar 326043 12-Inch W by 8.5-Inch D Three-Tier Acrylic Step Display. Here are the top ones, ranked by their Reddit score. 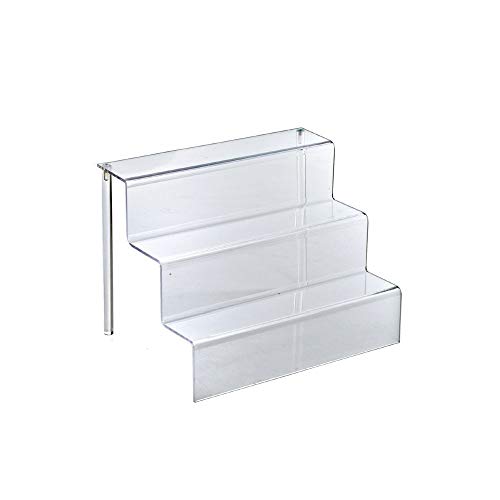 Here's the link if you guys want to grab one.

Co-owner of the collection here (my boyfriend and I are both into it), have mostly lurked on this sub since December with the occasional post. Some answers to the comments:

-Bf painted the Yoshi blue, he has an original green Yoshi as well (his favorite character, I'm a Luigi kind of guy).

-I love how we have one of the most derp Diddys I've ever seen.

Also, here's what the entire wall looks like -&gt; Imgur

IKEA DETOLF cabinet with Azar acrylic tiered risers seem to be the winning combination for how to display amiibo in a compact space. (See example.)

It looks so small though! I think the overall small size would bother me. I have a bookshelf in my room - I don't use it for Amiibo though, since I have Michaels baseball bat cases - but it's normal size one that I feel looks a lot better. This is mine here. Could most likely use those clear stands like this or something too.

I dont own this display but I've been thinking about purchasing one for a while. It has good ratings and the pictures from customers looks great.

If you're planning on getting every single amiibo and have the space, I really recommend just getting this, as its a lot cheaper than buying those cases:

Can fit the entire series. Recommend buying stands to display the amiibos better, like a couple of these:

If you have prime these are cheap and perfect. I dont know the width of your detolf though.

Edit- 4 pack for even cheaper.

fair enough. i grabbed this : riser

Should be able to update Sunday with pics.

I'd Highly Recommend Them

I have one for my overwatch collection as well. They're both around my entertainment Center and it looks great.

If you want individual ones, I recommend Amazon:

https://www.amazon.com/gp/product/B0083R3DHO/ref=oh_aui_search_detailpage?ie=UTF8&amp;amp;psc=1
That one, i think

wait for a sale or find a comparable one for cheaper: https://www.amazon.com/gp/product/B0083R3DHO

Got the idea for it from this awesome post from The Tanooki:
http://www.thetanooki.com/2014/12/20/the-tanookis-guide-to-proudly-displaying-your-amiibo-collection/

I just paid $16.95 for each, which is cheaper than it was when I bought one a little over a year ago (at $18.95, but only fulfilled by Amazon sold by someone else) though more expensive than when I bought the first 2 two years ago at (at $13.30 both sold directly by Amazon).

I got it on Amazon! it's this one

These are the common ones I see posted/used here:

Display on far left can be found on Amazon.

Idk about a cover, but these are the risers I use and really like them.

Think these are what you want. Pretty much perfect for pops.

Here it is!
It's inside this shelf on these displays
Just waiting for that gold mario :)

You would need at least 2 for the SSB set, and the SMB are taller so I'm not sure how well they'd fit, vertically. Right now Ike looks to be my tallest, and the top of his head just clips the feet of Yoshi on the shelf above.

Here they are on display with some of my amiibo.

They fit perfectly in a detolf; I just haven't gotten one yet because the Ikea doesn't open in my city until next fall. (And im not paying 100 bucks to ship an $80 item.)

They come from amazon http://www.amazon.com/gp/product/B0083R3DHO?psc=1&amp;amp;redirect=true&amp;amp;ref_=ox_sc_sfl_title_1&amp;amp;smid=APLCXQQAPID2B

These are what I use. You can squeeze 16 pops on each detolf shelf.

I used this one for the nendoroids, and these for some of the scales.

I have two of these from Amazon. I like that they are completely clear and you can put quite a few nendos on them. Here's what they look like with my collection.

These work really well with the Detolf glass display:

A little pricey, but they fit the shelves perfectly.

My collection is pretty modest in size, but I still think one Detolf would not be enough to display each figure nicely. I like admiring the work on all my figures hence the generous amount of space for each shelf. That and Black Heart is huge so she demands a shelf for herself.

https://www.amazon.com/gp/product/B0083R3DHO/ref=oh_aui_detailpage_o05_s00?ie=UTF8&amp;amp;psc=1 is the three-tier riser for the most of my nendos. It does get pretty tight with the stand's arm, but its been working pretty well for me.

Thanks! You have a nice display yourself.

I got the steps from amazon.

Staples. They're usually the cheapest there, since they're sold in packs of two. They're also on Amazon, though, but Staples is definitely the better deal.

EDIT: Woah, they discontinued that deal on Staples. They bumped it up to a 4-pack, which is annoying. Here is the 4-pack on Staples, and here is Amazon's listing. Staples is still cheaper, but it's dumb they don't come in packs of 2 anymore.