We found 13 Reddit comments about beautyblender Double Original Makeup Sponge Applicator, 2 sponges. Here are the top ones, ranked by their Reddit score. 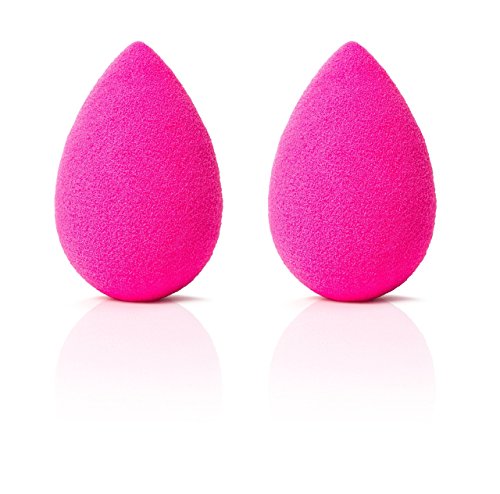 2 sponges: one for your vanity and one for your makeup bagThe Ultimate Make Up Sponge Applicator - Modernize the way you make upBeautyblender's patent-pending elliptical shape makes application foolproof by allowing you to access hard-to-reach areas with stunning easeIts suede texture is sensual to the touch and its unique curves fit the contours of your face, leaving your make up dazzling and undetectableBeautyblender is latex free, non-allergenic and odor free
Check price on Amazon

you can also get it at walgreens online

or amazon (These have good reviews but I'm not 100% on their authenticity.)

I actually use a $3 shave oil (Shave Secret) that I buy at WalMart, and it's the only thing that keeps me razor bump free. I will never go back. There's a couple of really nice shave oils out there, but none so cheap that work so well. I use the executive blade option (6 blades) from dollarshaveclub.com, which mails me four blades each month for $9.

My throat was a big issue until I discovered the Beauty Blender and using powder to set my concealer/foundation properly. Once you get rid of the razor bumps it's a lot easier to manage, too.

If you buy it on amazon you can get two for the price of one!

No I wish I got the $1 one rather than the Ulta one! The Ulta one was like a rubbery sponge! Just bruuuuutal!

I'll be honest when I say I have only been using the bb about a month. I bought the two pack for 20+ish? I have been using my normal brush cleaner on it and sort of rub it in, and squeeze it a few times, and so on. You can deff see makeup come out of it, but its still a bit stained. I plan on trying a few other ideas to give it a deeper cleanse. Since I bought the two pack, I haven't been too concerned with how long it lasts, since I have another on backup!

Actually just found this gem on Amazon too. A two-pack for only $2 more than the original with Best Seller and Prime status.

Do you have prime? $22 for a duo pack. I think it's legit, just got mine and daammnn is it soft! Im in love!

You can buy two for the price of one on amazon

And they are the original ones.

I know it's not ideal, and I hope you are feeling better, but at least it's still exciting news!!

Here are a few things I thought you would like:

I will say on the cleanser (because I am sort of cheap) I use the Dr.Bronner's Magic Castile soap in lavender (I bought the bar form) but they have liquid from Target and it cleans my BB perfectly. Also Amazon has a two pack for [24.99] (http://www.amazon.com/Beautyblender-Ultimate-MakeUp-Applicator-sponges/dp/B000I5HJ2Y/ref=sr_1_1?ie=UTF8&amp;amp;qid=1417464731&amp;amp;sr=8-1&amp;amp;keywords=beauty+blender)

Edit words... also my reasoning on the Castile soap is the fact it is way more than you will get with the name brand beauty blender version.

Try this for applying liquid foundation. You will not regret it.

I do a lot of my shopping online but I've seen it before in store at sephora too, I just did a search on sephora.com for beauty blender and it showed up for $39.95 for 2 blenders and the cleanser! Apparently amazon has it for sale 2 for 20 bucks (no cleanser though), and free shipping if you're a prime member: http://www.amazon.com/Beautyblender-Ultimate-MakeUp-Applicator-sponges/dp/B000I5HJ2Y/ref=sr_1_1?ie=UTF8&amp;amp;qid=1405482062&amp;amp;sr=8-1&amp;amp;keywords=beauty+blender