We found 3 Reddit comments about Belkin F8Z439-P TuneCast Auto Universal Hands-Free AUX for iPod, iPhone, iPad and Galaxy Models. Here are the top ones, ranked by their Reddit score. 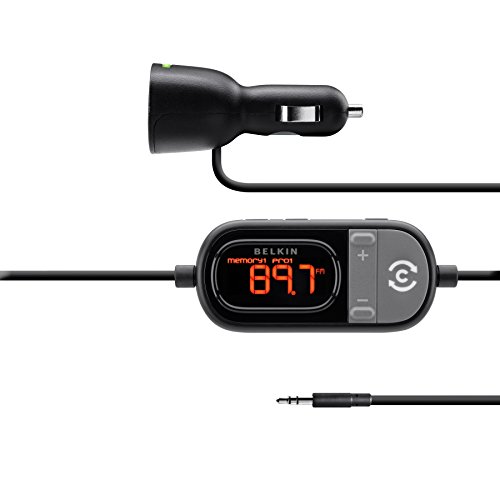 As other have said, FM transmitter is the only way to go. The person that you rode Uber with probably used something like this.

There are many different brands of FM transmitters, as well as "styles". Some that are made for specific phones (usually iphones) that match the looks of the phone, ones that plug directly in vs. using a cord, ones that also plug into the 12volt vs using batteries.

The one I linked is an example, I don't believe you should ever spend more than $20-$25 on an FM transmitter, and most of the ones under $5-$10 aren't good quality. If you use the reviews as a guideline you should find decent ones on Amazon. But keep in mind that everyone will be using them in different cars, which will have different reception. The broadcasting power of these is only a few feet, and of course anything between the transmitter's antenna and your car's antenna will affect things. For example, when I used one in my old car, if I put it on the passenger's seat (closer to the antenna on the right-hand side of the car), it would get quieter and a little static-y, but if I put it in the cupholder between the seats (further away, but in direct "view" of the antenna), it would be clear as day.

Plenty of options like this exist but I would never recommend them.

The only FM transmitter I would recommend is the hard wired style like the isimple. But for $20-30 more you can get a new radio and all the install parts off of crutchfeald or sonic electronics that will work and sound better.

I just use this and tune the stereo to that frequency. Save it at station 6 and you're good to go.