We found 8 Reddit comments about Bitten: The Secret History of Lyme Disease and Biological Weapons. Here are the top ones, ranked by their Reddit score. 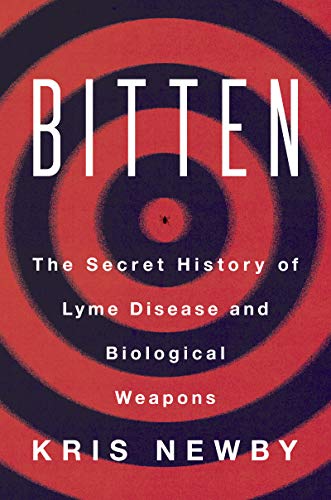 8 Reddit comments about Bitten: The Secret History of Lyme Disease and Biological Weapons:

you want everything we know? I have a giant notepad full of info...

This is the book they're talking about.

Here is the book that kicked off this whole investigation:

Here is the Rep Chris Smith(Republican-NJ) calling for the investigation in the H.R. 2500 meeting.
https://www.youtube.com/watch?v=FIR-uyIoqJI&amp;amp;feature=youtu.be&amp;amp;t=8366

Here is Kris Newby - author of the book: https://twitter.com/krisnewby
She is a science writer at Stanford School of Medicine

Lyme disease is the fastest growing vector-borne illness in the US. It is 6 times more common than HIV/Aids and twice as common as breast cancer. The CDC estimates 300,000 -1million people will be infected this year.

Lyme disease was first diagnosed in 1975 only 8 miles from Plum Island Animal Disease Center, where a secret Cold War era biological weapons program targeting animals was being carried out. Ticks would be an ideal transmission vector for such a project.

The upcoming book Bitten that is being released in two weeks addresses this theory. From the description:

&gt;As a science writer, she was driven to understand why this disease is so misunderstood, and its patients so mistreated. This quest led her to Willy Burgdorfer, the Lyme microbe’s discoverer, who revealed that he had developed bug-borne bioweapons during the Cold War, and believed that the Lyme epidemic was started by a military experiment gone wrong.

&gt;In a superb, meticulous work of narrative journalism, Bitten takes readers on a journey to investigate these claims, from biological weapons facilities to interviews with biosecurity experts and microbiologists doing cutting-edge research, all the while uncovering darker truths about Willy. It also leads her to uncomfortable questions about why Lyme can be so difficult to both diagnose and treat, and why the government is so reluctant to classify chronic Lyme as a disease.

I'm very much looking forward to see the evidence presented in this book. The implications of the US government covering up the release of a Cold War era biological weapon on its own citizens is staggering.

you’re not the only one who thinks that. https://www.amazon.com/Bitten-History-Disease-Biological-Weapons/dp/006289627X

had lyme couple years ago . wasn’t fun but two months of antibiotics and good as gold again.

There was a really interesting Radio War Nerd episode on Lyme Disease recently, with a guest with Lyme disease who spent years researching it and wrote a book about the subject.

The book has generated enough awareness that last month there was a bipartisan amendment in the house to get the DoD to admit if it tested ticks as a potential biological weapon in the 50s through the 70s.

Bitten: The Secret History of Lyme Disease and Biological Weapons Hardcover – May 14, 2019

Met plenty of people who caught it and treated early. Some who even had the tick and got it tested. They still ended up chronic even after multiple rounds of antibiotics. Myself included.

Once Lyme forms biofilms and goes into hiding all bets are off. As time passes Lyme seems to be evolving to become more antibiotic resistant as well.

Then there is the persister cells that need to be wiped out. Standard antibiotics are showing poor efficacy against them. Many doctors are turning to other antimicrobial drugs including antimalarial and leprosy medications.

One of the researchers who helped create Lyme disease confessed shortly before his death that it was breed in a bioweapons research program for the US government. It was designed and selectively bread to evade easy testing and treatment in the 50-60’s. Now that it’s escaped the lab it’s evolved to become even more treatment resistant and “catching it early” is not at all a guarantee of easy treatment.

Catching it early merely gives you a fighting chance to put it into remission before it can do a lot of damage. That’s about it. Most antibiotics will put it into remission but won’t necessarily wipe out all the biofilms and persister cells. So the disease waits until conditions are right and then reproduces and reinfects the person. Relapses can happen months or years after successful antibiotic treatment. That’s why we don’t really refer to people being cured but merely in remission. It’s because the disease often comes back later when you’re not expecting it.

This is unfortunately the truth and you can read more about it from a Stanford medical writer in her book based on freedom of information documents from the US government as well as the personal notes and documents of one of the researchers: https://www.amazon.com/Bitten-History-Disease-Biological-Weapons/dp/006289627X