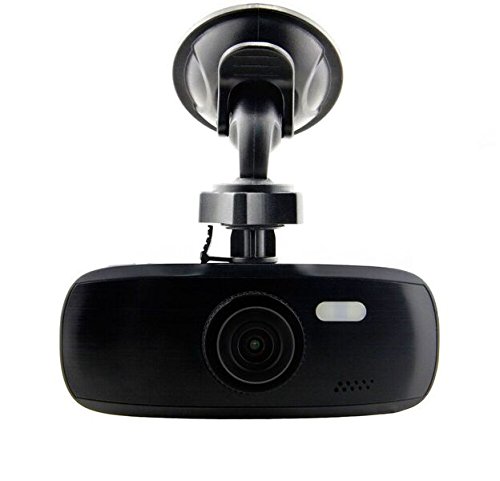 You need a dash cam. After 2 hit and runs I got one. The last two people who hit me got to buy my car cool new stuff. The g1w-c is good and is around 55-65 on Amazon. The cheaper ones will be low quality fakes. Transcend 32gb micro sd cards seem to work the best.

Cheap enough to get two, one forward facing, and one to face the rear. All you need to buy is a memory card and you're set. Remember to remove the protective film off the lens before using!

I've got two installed, the second one is for the rear both 32GB sd cards and hardwired with the ignition.

The front cam is a high heat capacitor, the previous ones I had lasted just past the two-year warranty, the Texas heat blows the battery up even under covered parking. It works fine for the price, up close you'll see plate numbers any movement not so much. Things do look farther away than they seem.

The rear cam is a cheap $25 Amazon lighting deal, now it is like $39 colors are muted, you can see if someone was on their phone at least.

If you want high end your Go Pro Black series is your choice and there are tons of Youtube videos on different budget priced cams.

I will tell you that the dumptrucks with the sign "we're not responsible for your windsheild", they are when you are three cars behind, didn't secure their load and you have video of their truck lossing rocks left and right.

Get something to protect you while driving and do not infrom any drivers when you're in an accident that you have a cam, let the insurance company catch them in a lie.

This won't help you in your current situation but I highly suggest that EVERYONE get a dashcam for their vehicle... specifically this one. It's $60 and is designed for high temperature environments. I made a post just like yours back in May and someone suggested I get a dashcam... so I did. Luckily I haven't had any incidents since then but the peace of mind is well worth the $$$. Good luck getting this sorted out!

Get a dashcam, turn it to you, and mention it if you're ever asked to leave your car (for approx. 10 minutes after turning off the engine). It records full audio.

It can at least calm your fears.

The new recommended one at /r/dashcam is the A119 I think. I bought the Black Box G1W-C before the A119 came out, and it was only $40 on Amazon, and runs perfectly. Only downside, is it's made by a Chinese company, and although the menu is in english, it's about as intuitive of a menu as you can expect from a Chinese company.

Honestly, I almost have enough saved clips to make a video of stupid shit. So I'll post that eventually.

Edit: Also, it has been suggested, that if you get into an accident, and the other person starts lying to the cops, let them. Then pull out the footage and show them, get them caught in a lie, and bam, case closed.

My Dashcam turns off when I turn off my car. So it wouldn't have been on anyway. But having a dashcam is essential. You should get one.

-edit- My dashcam has those same functions and I bought the hardwire kit but it is connected to 12v switched so it doesn't drain my battery.

Get two, one for each windshield.

Yep. I got nailed by a guy who backed into me as I sat in a drive-thru this morning. His tone totally changed when I pointed to the dash cam. Totally trashed the rear bumper of his sedan, but only put a little scuff on the bumper of my rig.
Edit: my camera. Does the job.

I got this one. So far it has been working well, though the suction cup takes several tries to stay stuck. It's usually the one recommended if you want a playback screen.

https://www.amazon.com/gp/product/B00P8F3LD0 - down to $58. I bought it over a year ago so I would do some research and get a better one possibly. Don't get me wrong though, this one is perfectly fine.

G1W dash cam. The one with the capacitor so the battery doesn't blow up.

HERE is the same page, but without the sneaky referral link inserted.

Here is a link! I needed one on a budget that would stand up to the AZ summer heat. This was suggested several times but the front panel covering the display has fallen off (I think the glue melted) and it is already slightly warped where it hangs from the window. I've had just for about 2 months. Otherwise so far so good but we haven't gotten into real summer yet. amazon.com/dp/B00P8F3LD0/ref=cm_sw_r_cp_apa_i_IjX7CbQ6Q9ZHB

How'd you hardwire it, into the rearview mirror? I thought about doing that but haven't gotten around to it.

I have the Black Box capacitor model just because it can withstand better heat supposedly. Had it for a year now and it's held up great.

I've had this one for 2 years now, no problems. This is a slightly newer version that has no chrome

If you're going to get one somewhere other than amazon, just make sure you're getting the G1W-C/G1W-CB. The C means it has a capacitor instead of a battery; it does better in the heat, but only is powered when your car is running (unless you wire it in to an always-on fuse).

NB: I only park out in the sun when I'm not at home or work. I have had covered parking at home and at work the entire two years I've had the camera.

I really like it. Only $60 and it's Go-Pro quality footage with great nighttime performance. Only cons are no GPS and the "G-sensor" is too sensitive and clogs up the memory card with random clips. So it has to be turned off.

EDIT: Here's some raw footage I happened to have on my hard drive.

This is the one I have. The C means capacitor instead of battery since it gets too hot in Atlanta to have a device with a battery sitting on your dash all day and the B means the lens is black so it's less conspicuous.

I got This SD card. The camera supports up to 32gb. Don't buy SanDisk with this camera, they don't play well.

And I got this attachment which is way better than the suction cup option.

Lastly, make sure if you buy this camera it records in .mov files. There some cheap knock offs that record in .avi that aren't 1080p.

It's inexpensive and mine is real reliable. I've had it running for 3 years now.

Add a wiring kit so you can hide the wire in the headliner and it will go on/off when you start the car automatically.


Two very solid dashcams. /r/dashcam can be of help too! :)

After quite a bit of research I went with the G1W-C because it has a capacitor built to withstand high heat, and I live in FL. For the price, it's awesome. Super easy to use and does its job perfectly.

We have the Eyesite too, and it works fine. I mounted my dashcam on the bottom of the rear view mirror. It came with a windshield mount too. Here is the one I have in all my vehicles: https://www.amazon.com/Black-Box-G1W-CB-Capacitor-Dashboard/dp/B00P8F3LD0/ref=sr_1_2?ie=UTF8&amp;amp;qid=1478556456&amp;amp;sr=8-2&amp;amp;keywords=dash+cam+capacitor

Here is a link to amazon my_search. I'm thinking of getting it myself. Reading up on this subreddit, this model seems like a good bang-for-your-buck buy.

Many dashcams run fine on USB power - the 12V lead just converts the voltage down to 5V.

So you could conceivably use more or less any dashcam, paired with a mobile phone power bank (like this one), which would also be useful for other things.

The hot weather requirement makes me think something with a capacitor (e.g. G1W-CB) might be ideal.

I know this doesn't help in the least bit now.

But for any future possible issues I highly suggest getting a nice always on recording dashcam.

This is the one I currently use.

It stays in my truck and is always recording, I have a 64 gig SD card and it will record for around 12 hours before starting to overwrite the oldest file, any knock or hit or sudden stop will lock a file from deletion and prevent it from being overwritten.

It has paid for itself 100 times over easily.


This is the one I have. I've had it for 3.5 years and the only issue I've had with it didn't start until a week ago. The date and time keep resetting so I have to set that up every time. It's kind of annoying but it only takes 30 seconds. I'll keep it until it dies fully.

You'll also need to get an SD card for it.

Crap, I got the model wrong in the title. This is the exact camera: https://www.amazon.com/gp/product/B00P8F3LD0

This is the camera i use facing forward:

This is the one I have facing backwards:

You would need to add memory cards.

Just a G1W. Amazon. Even though the raw video quality isn't -that- great, it's a fairly handy cheap little thing. Before getting it I looked up reviews for basic ones and this was pretty much the de facto entry level cam.

I have had the GW1-C in 3 of my vehicles for the past 2 years. Also installed 1 in my father's truck about a year ago. All of them are still going strong no issues. SD cards are still working fine also.

Unless you're gonna be using an older phone (one that is not your daily driver). I would highly suggest not using your phone as a dashcam.

Phones are not really set up to record like this. Mostly due to heat, which can cause a slew of problems. The memory and chipsets are also not built for long recordings constantly.

Which is why I would only ever recommend doing this on a phone you don't care about that much.

If money is an issue, there are some pretty good dashcams on the market for a good price. The G1W can be bought for 40-50 bucks depending on where you buy it from and is one of the best cheap entry level cams you can get.

Consider picking up on of these inexpensive dash cameras. I'm happy with mine. It loops and records over the oldest file, starts when the car starts, stops the same way. Set it and forget it, but have video when you need it. Great extra bit of insurance.

If you want to hardwire

That's a total of about 90 bucks. If you can install yourself your done. I've had this for 2 years. Never had to officially use it. Recorded some crazy and funny things though.

This is great for peace of mind. If this dude never had a dashcam, he would have been fucked for all those tickets especially the one where he is following to closely.....to a cop car! With this video, he will probably have to pay for no license plate, and just remove the tints.

I own the regular G1W, but this is the one to get, worth every penny. Get one.

The cheapest usuable cam is widely regarded to be G1W, which can be purchaced from Amazon for $60 (Make sure to use that link, there are knockoffs on Amazon as well but that's the real link)