We found 25 Reddit comments about Casio Men's GW7900B-1 G-Shock Black Solar Sport Watch. Here are the top ones, ranked by their Reddit score. 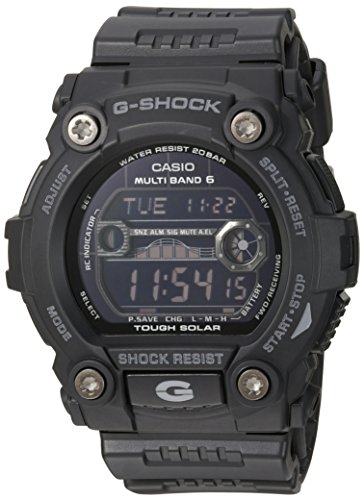 I am a moderator at /r/Watches. I wrote about six paragraphs and Alien Blue crashed. I will edit this post tomorrow Morning EST will dump more info than you will ever need.

EDIT: OK, jeez! Sorry that I have a job to do besides moderate a sub and edit posts from the night before...

Basically, G-Shocks are the go-to choice for military and law enforcement. They are super rugged and are actually difficult to break on purpose. I wear a GR7900KG-3 (pictured elsewhere in the comments), that is a limited edition colorway of OD green and orange with an inverted screen. The non-limited edition of my watch, the GW7900B-1 has a laundry list of great features: it's solar-powered, has a perpetual calendar (automatically adjusts for different length months like February), tide graph, dual time, time-zome adjustment, 200m depth water resistence, uses one of G-Shocks better anti-shock systems, (edit: there are about 15 other features that I'm not listing) and the best feature of all... it uses radio synchonization to set the time for you, based off of the nearest atomic clocks located around the world.

There is also the much more affordable, original G-Shock. They make a "reissue" of it called the DW5600E-1V. It's not going to give you any of the fancy features, but it is tough as hell and will probably survive getting run over by a tank. It's also 1/3rd the cost of the 7900.

Obviously there are a million G-Shocks to choose from. These are just my personal suggestion and the most common, inexpensive suggestion. However, you said "nice watch." I wouldn't field a "nice watch" airsofting (I use my G-Shock), but if you wanted to, and wanted to have it be presentable the rest of the time it spends on your wrist, I suggest a Luminox Recon Point Man.

The most important difference here over other Luminox watches is the sapphire glass crystal. Unless they are shooting BBs made of jagged diamonds, it isn't going to harm your watch. A regular mineral crystal can shatter from the force of taking a round. Unless they shoot your watch directly from about 15 feet away, nothing is going to break a sapphire crystal. The Recon Point man just so happens to have a sapphire glass crystal.

It comes in the colors:

THIS IS THE ONE HE WANTS

i think a casio g-shock would be a good watch for that! rugged, solar powered, shock resistant, has a backlit screen, water-resistant.

Do you mean in addition to the Seiko SNDA65, or do you want less or more expensive, larger or smaller ? Do you like the all-black look, or the chronograph?

Here are some chronographs that are similar to it.

If you want more real military, as opposed to retro military-style analog, Try a G-Shock, Protrek, or a Sunnto.

If you can wait until next weekend, I'm going to be giving away this watch. Similar to the giveaway I did on this post. I don't have the original packaging but for $50 bucks, PayPal fees included, I'll ship it out USPS Priority Mail.

If not, wait till next weekend and enter the giveaway.

G-shock would be the way to go. I have and can heartily recommend this one. After purchase, the only thing you ever need to do to/with it is look at it.

And if it ever experiences trauma bad enough to kill it, you needn't bother worrying about it because you've likely not survived whatever it was.

I would also recommend a solar atomic watch. Currently I have two. One G-Shock GW7900B1 for rugged use and one Citizen AT4007-54E for work/suit.

One slight problem with the GW7900B1 though. It was my first choice overall in the G-Shock series because it combines Shock resistance, Multi-Band 6 and Tough Solar features but after a couple of months only, rivets on the bezel started to fall. Big disapointment. I realised I'm not the only one and found this thread and this thread about the problem and how to order/replace the lost rivets.

My suggestion to you would be the GW2310 or the GW2310FB-1CR if you like reverse display.

It all depends on your budget too.

http://www.amazon.com/gp/aw/d/B00309HQPK
If you can afford it this is probably the best watch I've ever bought. Solar powered ( I've never had had the battery power fall below "high"), water-proof ( I've done lots of swimming with it on), and it adjusts itself every night to the satellite so you're never more than 1 second off from the exact time. Also it's a stopwatch and timer and all the jazz. Sorry to sound like a commercial but this watch is badass. They used to have it on sale for like 50$

GWM5610 series has all your requirements

GW7900 series has all of that plus tide and moon stuff

I've been wearing this daily for about 3 years. Aside from the daily abuse I've given it, it's taken 2 weeks in the jungle, trips underwater to ~120 feet, and freezing temperatures. It's still holding up well.

Top picture from left to right:

And on the bottom: My Zippo

Just the stuff I carry in my bag. A first aid kit, duck tape, a screw driver, eyeglass retainer, paracord, extra lock, and some playing cards. The bag I use is the Maxpedition Falcon II.

Up for grabs! Both pieces I adore but do not get enough wrist time.

All prices include shipping within the CONUS via USPS. I prefer to require a signature upon delivery.
_
SOLD

Love this piece. I've always been a big fan of the negative display and atomic time sync function, so when it came time to get a watch with a tide function, this was an easy choice. This will come with a JaysAndKays NATO as well as the original rubber strap w/ wrist guards.

(EDIT: After reviewing the photos, this bit of "gunk" around the face is just dust. this will be cleaned prior to shipping.)

Bought about one year ago. I have always carried a Victorinox Cadet so this was right up my alley! It comes on a Black Nato strap. A very nice, thin piece that sits on the wrist very well.
_
Looking to sell but open to some trades.

Seiko 5 I would change the strap to something that appeals more to you if you don't like it. Great starter watch though.

Invicta Pro Diver Ive heard some debate on the quality of these watches, but for your purposes I think it would work well.

Casio G-Shock Solar Sporty solar G Shock similar to the one you linked.

Seiko Solar Another Seiko but this one is on a metal band and is solar powered.

Timex Weekender Another great starter watch that comes in a million color combinations. I got one for my brother as a gift off Amazon for $17 when they were having a sale.

Its one of the best value g-shocks around.

never has 135 bucks bought you so much watch

I own this exact model.
I've taken it dog sledding in -30° F weather, snowboarding, swimming, surfing, hiking, etc. It's my go-to watch any time I'm doing something remotely athletic or outdoorsy and the functionality on is great. I'd recommend buying it elsewhere though. I found mine for around $80 I believe. I don't remember where I bought it, I'll see if I can dig up the e-mail from when I purchased it.

Just got my first G-Shock last weekend to see if I like the size and style, been wearing it ever since. Went with the DW9052-1V and would like to start moving up into nicer ones, I've been considering the GW7900B-1 for my next one because it has solar charging and auto illumination. Thoughts?

Do you have large wrists?

This one seems the most affordable and often used by members of the military. http://www.gshock.com/content/technology/atomic/

It has all sorts of advertised robustness tests, this does not use GPS but different radio towers, one located in Colorado, so maybe it would work underground :D

I was looking at this one.

But maybe I'm just not understanding how large it will be on my wrist. It just seems like the face has a lot of information packed really tight.

But I also really like the the black riseman, but it's almost twice as much:

There are a lot of G-Shock options that are pretty cheap and have water resistance up to 200m, but I don't know if that's what you're thinking. They do have analog options; I personally think they look kind of silly on the G-Shock, but a lot of people like them.

This is what I'd go for. Solar powered and atomic timekeeping, so it's pretty much maintenance free. Also water resistant up to 200m. Amazon link