We found 23 Reddit comments about Characteristics of Games (The MIT Press). Here are the top ones, ranked by their Reddit score. 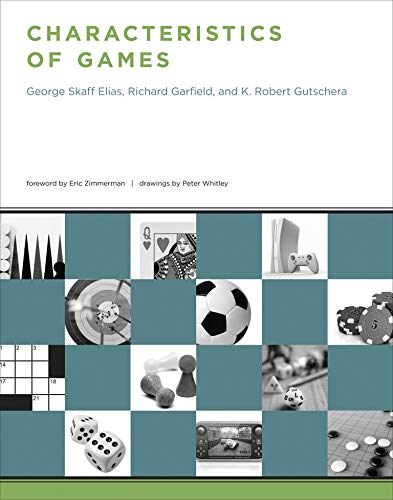 23 Reddit comments about Characteristics of Games (The MIT Press):

Oh oh, I get to brag now! Thanks for summoning me, /u/costofanarchy!

I was in his first class there! Characteristics of Games. He and Skaff were working on their book, which I'm thanked in. Likely for my work as their TA the next year, after which Skaff hooked me up with an interview my first game design internship. [Edit: I'm still a game designer to this day! Big thanks to them.]

Fun fact! One day after class they asked me "so how do these new Planeswalker cards work?" It's not every day I get to brag about explaining to Richard Garfield how a new Magic card type works.

Anyway, in my memory Richard is a pretty calm teacher. Certainly knowledgeable, but the class was pretty basic and targeted at a wide crowd. A good intro, for sure. I bet he'd shine in a deeper discussion, and at the time he was usually willing to chat before or after class. He's somebody that tends to be careful with his words. Skaff has the stronger personality in that setting, so he tends to stands out more in memory. They're a good team.

(Updated the authors. Thanks to /u/esoteric23.)

Characteristics of Games Doesn't just talk about board games, but Richard Garfield is one of the authors.

I'm currently midway through Characteristics of Games, written cooperatively by 3 people, probably the most notable of which is Richard Garfield (designer of Magic: the Gathering and RoboRally). It is really good, and has great insights into how games function. Most of what it discusses is focused on board games, though it does discuss videogames at times as well. Highly, highly recommended.

I also find the Ludology Podcast to be invaluable. It's hosted by Ryan Sturm (who also hosts the How to Play Podcast) and Geoff Engelstein (designer of Space Cadets and Space Cadets: Dice Duel). They tend to pick a topic and elaborate on it for an hour or so, and if you start at the beginning, it's a really great way to slowly introduce new things to think about when designing games.

If you like this, then this book is a must read.

I would always suggest starting with Characteristics of Games before diving deeper.

Possibly the best book on the subject (AFAIK) Characteristics Of Games

Characteristics of Games is a touch dry but it goes into pretty good depth.

This one was very good indeed! I'd also recommend Characteristics of Games.

You might want to give a few of these a read before diving right in. Just because you have some experience playing various games does not mean that experience is going to completely transfer over to game design.

Kobold Guide to Board Game Design

The Art of Game Design: A Book of Lenses, Second Edition

Strict elimination: The player is literally out of the game.

Effective elimination: While there's a theoretical chance the player could win the game, it's not realistically going to happen.

Strict elimination isn't a problem (except for the player who has to twiddle their thumbs while everyone else keeps playing). It can be boring for the eliminated player, but it doesn't break the game.

Logical elimination is horrible. It can lead to kingmaking in multi-sided games.

Effective elimination is almost as bad, because the effectively eliminated player may want to be done, but the other players will want them to play it out since there's still some uncertainty.

So, back to the original question: If the game has reached the "logical elimination" point, as in the original example, I think it's appropriate for the losers to congratulate the winners on their victory. "Ah, good game - you've got the win. Congrats. Another game?" Forcing the eliminated team to go through the motions seems like the worse evil to me than denying the victors the pleasure of the final couple of moves toward the official victory.

Effective elimination would be trickier. One player / team feels that the other has an insurmountable lead, though they theoretically have a shot at victory. In this case, the game should continue, but everyone should try to make it end as soon as possible. (For instance, being down to just a couple of territories in a game of Risk.)

These issues can be a symptom of poor game design. Fortunately, they're rare in most modern board games.

are both great books about dissecting strategic situations. It will really help.

When playing with repeated partners, it's also a problem they know how YOU play. It's important to vary strategies sometime so you don't cede the field to your partner.

Set additionally REALLY pisses people off because of the hand occlusion cause by the mechanical laying out of the cards.

But things based of mental skills like set are really only fun when played with things that dim those mental skills. Otherwise, it's more a test of "who's best at pattern recognition" by the third game.

In games with too much skill and too little randomness, enjoyable games are really only possible with someone of almost the same skill level.

http://www.amazon.com/Characteristics-Games-George-Skaff-Elias/dp/026201713X by George Garfield (the creator of Magic) talks about this and many other game topics. Ebook available here

Not sure why my post gets downvoted? Lol, i guess i should just not respond?

anyways, here is one book. It's very general but actually really valuable as a starting point https://www.amazon.com/Characteristics-Games-Press-George-Skaff/dp/026201713X

I've been meaning to read Characteristics of Games. It's the textbook that Richard Garfield uses in his game design classes.

One of my favorite books is Characteristics of Game Design (https://www.amazon.com/Characteristics-Games-Press-George-Skaff/dp/026201713X).

By suggesting the possibility of a system that is absolutely not an inference that I "want" said system or that I think it's "good" or alternatively "bad". I am well aware of what terms I used, what they could mean, etc. but for a conversation like this I didn't think it was worth a whole lot of thought. I was just saying that such a thing "could" exist. But now it's stuck in my head a bit.

A really small "deck" mechanic that could possibly be scaled to mmo action game speeds might be something like the Crusader class from 3.5 D&amp;D in The Book of Nine Swords. I had to refresh myself a bit on how it worked.

They start with five "manuevers" at first level, but when they start combat they only have two of those readied. You "could" use dice or any other random method to determine which ones in table top, but cards were a pretty convenient way to do that. It was a tiny deck, but still a deck. You would get back additional manuevers every turn. Where it got interesting was eventually between some feats (and stances?) and more manuevers at higher levels and some class features they could be played quite a bit like an MMO tank, shrugging off a portion of damage and using that to reset some of their manuevers.

It was a small enough number of decisions that I think you could play something like that pretty quickly. Maybe throw in something like the world of warcraft monks stagger mechanic where as they mitigate damage they add "wound cards" to the deck and they can clear "wounds" with certain manuevers, or take more of them or use them to deal damage with counterattacks.

Game Theory is mostly math by the way, it doesn't directly pertain to video games.

of course the key is developing the game concept and mechanics.
i develop large spreadsheets for my scoring formulas.

this is a very great book. in my amazon review of it, i list all the other books i would recommend on game design. (games of all types)

Not specific to Netrunner, but have you read this book?: https://www.amazon.com/Characteristics-Games-Press-George-Skaff/dp/026201713X


To help add charity links, please have a look at this thread.

This bot is currently in testing so let me know what you think by voting (or commenting). The thread for feature requests can be found here.

Okay, here are 4 suggestions about theory. There are plenty more, but these are a few of my favourites.