We found 5 Reddit comments about Chris Crawford on Game Design. Here are the top ones, ranked by their Reddit score. 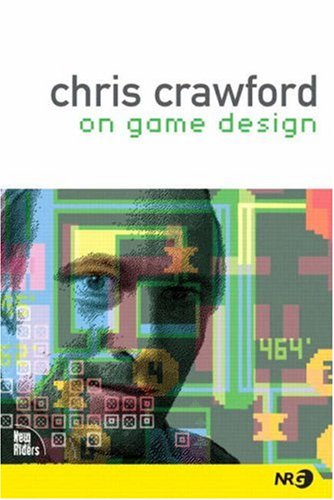 First off, read anything by Carl Jung. His theories on archetypes and the collective unconscious form the groundwork upon which not only games, but the entire modern entertainment industry are built.

Basically Jung argues that there is a collective set of symbols and ideas that all humans, regardless of culture or upbringing will respond to. Understanding these symbols, and building your game around them - either as mechanics or story - allows you to influence how the player will respond.

Jung: A Very Short Introduction is a pretty easy way to get started. After you read that I'd suggest getting into the meat of Jung's own words with The Portable Jung (coincidentally edited by Joseph Campbell)

And with that, you should also read The Hero with a Thousand Faces by Joseph Campbell. He takes Jung's ideas, and shows the specific symbols used in the Hero's Journey - one of the most common story types. People talk about the Hero's Journey all the time - but it's a really important concept to understand if you're doing any sort of creative works. Here are two quick video primers on it:

A more serious one: Ted Ed: What Makes a Hero

A more awesome one: Glove and Boots: The Hero's Journey :)

If you want to go further on the narrative route I'd also suggest The Seven Basic Plots by Christopher Booker. He takes the Hero's Journey and shows how it is just one of several different plot archetypes, all of which have their own internal path, rules, and idiosyncrasies.

Now, in case you're thinking "Why are you sharing these books about narrative with me? Games are not stories!" remember that people have been responding to stories for all time - and good storytellers are masters at making people feel the desired emotion at the desired time.

Therefore I'd also direct you to Story By Robert McGee as well as Poetics by Aristotle. Both of these books look at story in a mechanical sense, and explain the precise methods storytellers (both ancient Greek ones and modern Hollywood ones) use to evoke emotions in the audience. These principles almost directly translate to game design.

After that I'd suggest looking at Chris Crawford's list of books all game designers should read. Unfortunately I can't find a copy of the list on the internet, but it's at the end of his book Chris Crawford on Game Design

Fantastic! He writes about his game Tanktics in his book On Game Design and I thought that was a very old interesting way to combine a boardgame with electronics. Obviously a bit of an evolution of the concept in that article, but using a simple microcomputer, and also it had AI opponents. You input your actions and the computer would tell you about the computer moves and the results of combat. He claims it was the first commercial computer wargame, and I think it quite possibly was?

I've been following the writings of Chris Crawford for awhile, and he has a lot of interesting things to say about the game industry that you won't hear from anyone else.

Chris Crawford on Game Design was my introduction to him, and still my favorite book on game design. The first half of the book is a lot of insightful rants, but the real unique treat is the second half. The second half is like a game designer's memoir, where he reflects on each individual game in his career and details what challenges he had for each, what decisions he made, his mistakes and successes, etc, and highlighting what he learned from each project. Each game is treated like a short story, and is highly readable. I learned a lot more from these than the vast majority of postmortems I see from other companies. It's not on the Kindle yet, though :(

I downloaded the ACGD PDF ages ago, but I dislike reading books directly on the computer. Two weeks ago I noticed it finally got released on the Kindle for the cheap price of $3, so I snatched it up and I'm currently reading it.

He also has a personal website, with archives of all sorts of old articles he wrote or was involved in, including a journal of computer game design. There is a lot of game design gems buried in there.

His other two recent books are quite good also. Lots of general design insights in The Art of Interactive Design, and thoughts on what he's learned while developing Storytron in Chris Crawford on Interactive Storytelling.

I don't have time to type up the list sitting at my desk, but I'll do it at home tonight.

I'll have to check that one out. Another book I found really interesting is Chris Crawford's book