We found 26 Reddit comments about Cunt: A Declaration of Independence Expanded and Updated Second Edition. Here are the top ones, ranked by their Reddit score. 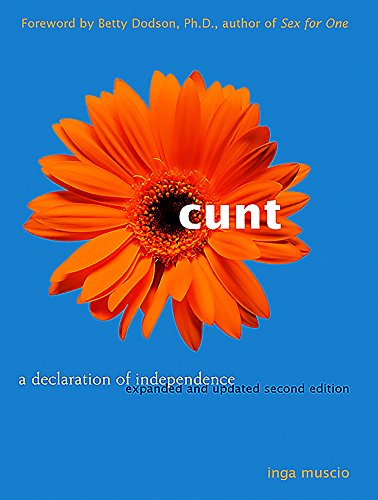 26 Reddit comments about Cunt: A Declaration of Independence Expanded and Updated Second Edition:

Cunt: A Declaration of Independence is one of my favorite titles. It may have a shocking name, but it is something that every woman should read. I have purchased copies for many of my friends in hopes they would love it and pass it on.

I am a woman and I use the word cunt regularly. Generally to great effect.
I'm not terribly vulgar (but I can be) so it usually has a much heavier shock factor than I anticipate.

Syntax should mean little. Unfortunately it is not always the case.
Some chicks need thicker skin.

This book, titled Cunt: A Declaration of Independance does a pretty good job of covering the subject (although it is pretty heavy on the feminist side).

From the reviews on Amazon:
&gt;Striving to remove the negative connotations from a word usually used as a scathing insult, Muscio traces the history of the term "cunt" and asserts that it was once a term of respect before the patriarchy turned it into a profane, misogynistic epithet. This transformation, she insists, occurred as part of a conspiracy to make women feel a sense of self-loathing and uncleanness; only by reconnecting with love for their genitalia can women achieve personal and political power.

You sound like me when I was a teenager. I felt like a very sex-positive person, thought people should be able to enjoy sex without shame, etc, but my upbringing made me feel intense guilt when it came to myself.

I also found this book to be really helpful. I don't agree with everything the author says but her relentless sex-positiveness helped me get over some of the guilt instilled by years of religious upbringing.

I hope this helps.

FWIW there are some etymologies that trace it back to a term of reverence. But its oldest written English translation is to the placename Gropecuntlane, which was exactly what the placename suggests. It's best not to use term unless you know your audience.

It's pretty fucking bad even in parts of America that look the other way at offensive language. I'd put it below the n-word, maybe below R , but around the same level as F. For whatever reason "twat" is a more acceptable term, maybe because it isn't as harsh-sounding?

In a pinch call somebody an asshole. Everybody's has one of those.

I love the word cunt, but I don't use it lightly. It's a pretty emotionally charged word.

Here's one of my favourite books, all about the origin, history and modern uses of the word!

All my feminist friends have read a book called Cunt. I know nothing about it but the title has, for understandable reasons, stuck with me over time.

cunt is a great book

Cunt: a Declaration of Independence by Ingrid Musico.

There are many different types of feminism. Post modern feminsim is my personal favorite. It focuses on the defense of the other. "The other" is whatever person or group of people gets the short end of the stick. For example, in parental rights, men are currently at an unfair disadvantage. It is very difficult for a father to get custody of his children, even if he is the more deserving parent. So, post modern feminists are for defending a man's right to fatherhood.

It is important to understand that no feminist speaks for all feminists. When I was your age I read Cunt. I recommend it to anyone interested in learning more about feminist discourse. Not all feminists, myself included, agree with every word in the book, but it is a good jumping off point.

Of course. There was a book published about it. How well that's worked is dubious. It's definitely interesting though. To me personally? Bitch is what I grew up hearing thrown around in high school. It's not threatening at all. Cunt on the other hand... much more of a damaging insult to me. (N.B. Ain't got nothing against the word, just don't need to throw it around)

If she hasn't already read it, the book Cunt. This is the book that got my most intense feminist friend into the whole feminism thing :)

I hope you have read Cunt: A Declaration of Independence

Check out a book called Cunt: A declaration of Independence. It's a great fun to read, very sex positive and offers a contemporary re-lensing of women's issues.

This would be a great question for /r/asklinguistics. A quick search shows only that someone asked how old it is.

A little bit of searching though brings up this interesting article that states:

&gt;According to McDonald, “cunt” was used to refer to the vagina without any suggestion of vulgarity until roughly the end of the fourteenth century.

Also of interest, there is a book that claims it used to be a term of reverence.

I would ask the linguists though.

In the 1970s, during what many call the first feminist movement, there was drive to eliminate the common usage of words that were derogatory towards women. "Cunt" was at the top of that list. More recently, there is a movement towards women "reclaiming" it, much as the African American community reclaimed the racial slur "nigger".

Here's a whole fucking book on the word.

Wikipedia touches on it

This book is seriously helpful. Even friends reading it in their 30s have been like "Ooooh!" Highly recommend it - don't be put off by the title. Honestly you'll get more out of it than you would ever imagine :) Be gentle with yourself OP.

I found CUNT to be a particularly interesting read.

I relish (and sometimes revile) certain sounds as well. I probably never would have liked the word cunt were it not for the imagery of this particular poem, quite frankly. I'm one of those people who has hang-ups about the mouth-feel of certain words (can't stand the way "panties" feels as it is articulated), and I think my studies of phonemes and articulators in my degree program (Speech and Hearing Science) only deepened this tendency. So I definitely understand where you are coming from on this. I've hear the Louie C.K. bit before and I do enjoy it! (There's quite a bit of his stuff that I like.)

I've been told I cuss like a sailor at times. I think it's because of what I held in at work (career with kids).

The poetry anthology is Claiming the Spirit Within and I'll go so far as to say it's worth more than what Amazon is hawking it for these days. Also, with regard to "cunt," there's a book by the same name. If you haven't read it, it's an interesting read. I can't say I agreed with it in its entirety, but it did get my gears turning and introduce some different perspectives in feminism to me.

With regard to medical terms, YES, there are some great ones out there. Although I find some disease names to be excessively impenetrable (particularly some of the spinal conditions which seem to be so similarly named and yet have such long names that it would be a bear to memorize them correctly ... thank goodness for reference materials).

Oh but wait! It's so much more. "Negative reactions to 'cunt' resonate from a learned fear of ancient yet contemporary, inherent yet lost, reviled yet redemptive cuntpower." (From Cunt by Inga Muscio, p 7.)

According to the book, "cunt" used to be a term of respect for women. Over the years, its definition changed (as definitions do). I think the main problem with "cunt," what makes it so powerful, is that it refers exclusively to women. That is, it makes an insult out of womanhood. More specifically, it demonizes women's sexuality. That is the major issue: women's sexuality.

From the book:
&gt; The containment of woman’s sexuality was a huge priority to emerging patrifocal religious and economic systems. Cunts were anathema to forefather types. Literally and metaphorically, the word and anatomical jewel presided at the very nexus of many earlier religions which impeded phallic power worship. In Western civilization, forefather types practiced savior-centered religions, such as Catholicism. Springing forth from a very real, very fiscal fear of women and our power, eventually evolving into sexual retardation and womb envy, a philosophy and social system based on destruction was culled to thriving life.
&gt; you

Apparently, it used to be An ancient title of respect for women, that long ago veered off this noble path

I read this book called Cunt for my gender and sexualities class last fall. There is a chapter in the book where the author describes her experience in naturally inducing a miscarriage, and it's a really great read. She talks about carefully picking herbal supplements and teas to drink and having her massage therapist friend come over a couple times a week to massage her stomach.

It ends with the miscarriage falling on the floor at her feet when she was in the bathroom and just being amazed by how cool the whole experience was. The rest of the information in the chapter is outdated and irrelevant in terms of contraception methods, but that one little section is great.

I think the method that the woman went about to induce the miscarriage sounded pretty safe and awesome. She was able to terminate her pregnancy at home surrounded by the encouragement and love of her friends who were helping her.