We found 7 Reddit comments about Danelectro Electric Guitar Mini Amplifier, Aqua (N10A). Here are the top ones, ranked by their Reddit score. 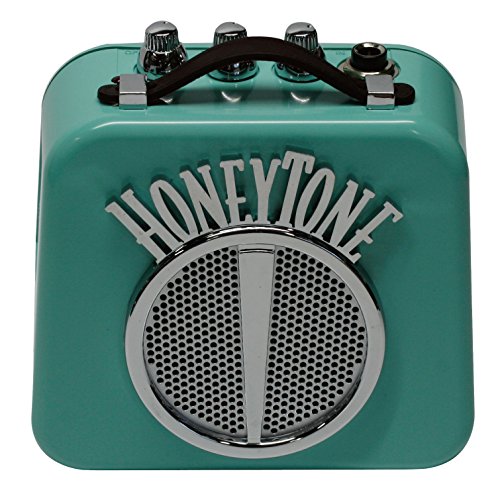 My personal favorite is the Orange Micro Crush. It has decent volume, actually has pretty good tone once you dial it right, and most importantly, doesn't buzz. It also accepts a 9v power cord.

The only other one I have tried was the Danelectro N10. It was horrible. I mean absolutely awful. Terrible tone no matter what the knobs were set to, and buzzed constantly. And by buzz, I mean, every single piece in this thing would rattle around every time you played a note. Also, if you played too loud, it would just cut out. I spent 5 minutes attempting to get my money's worth out of it, and then took out the battery to save for my Micro Crush.

The next one I want to try, because I have an obsession with these little things now, is the Roland Micro-Cube. I've heard nothing but good about it, even though for that price, you could have a significantly larger practice amp.

Edit: I know what I said about the Roland, but I just got the Pignose 7100 as an impulse buy, while at GC for another impulse buy. I have a problem, I know. So this amp is, first of all, really cool looking and solidly built. Second, it requires 6xAA batteries instead of the usual 9v. ...Also, it seems to have a different 9V adaptor port than all other micro-amps and pedals I own. The tone is pretty good, up there with the Orange and I would say even clearer, and you can open the back for a more airy, spacey sound. I like this amp alot, and it may replace my love for the Orange.

I also like my Honeytone mini amp. It has a headphone jack, but also a speaker so you can play out (not very) loud.

When I had an Oscar Schmidt OU2E I bought this http://www.amazon.com/Danelectro-N10A-Honey-Tone-Mini/dp/B000B6DHAS to go with it. I loved it and it was only about 20 bucks!
Edit: I also went with Worth strings at first and they have a nice bright tone, but I eventually switched them for the Aquila Nylgut strings as they have the long sustain and sweeter sound that I was looking for.

Honeytone. Don't laugh. Listen to one through good headphones, or hooked up to a nice stereo, rather than the internal speaker. Fender Mustang I is also a good-sounding start.

There are lots of little amps and mics out there, but the bottom end of the mic market is about $100 by itself. I got a Shaker Mad Cat

For cheap portable battery powered amps you can go as low as the Honeytone. I got one for $20 at Guitar center. It is a terrible amp, but it can be used for some things. For around $100 I got a Roland Micro Cube. I always thought that would make a pretty good busking amp. It models, it has reasonable control of tone, and it isn't a bad speaker. Battery life is really good.

That will be the next happy gear day for me. I'm still starting up so I figured good guitar first, then good amp. For now, I plug right into my PC and use software to simulate different pedals, effects, amps. It might not be so bad if my PC speakers were decent. But one thing at a time.

I do have a Honeytone for when I want to play away from my PC. It's great, but I need a real amp.

Hello! Thank for the warm welcome =)

Haha, hmmm, let's see. That would probably be a cheap electric ukulele (though pricey compared to the cheaper items on my list) as well as a mini amp to go with it. Kinda expensive, but I love dem&lt;3

I'm a musician so I love love learning new instruments, but they may be random to someone who's not and they are admittedly pretty random for me as well.

I'd say they're there because while I adore my ukulele that I have, it's very sweet. Ukuleles are a sweet instrument, and I'd love to take that sound with an alectric one, add my distortion pedal to it, and create a new, badass strange wonky ukulele sound that people haven't heard of, haha.