We found 16 Reddit comments about DC Universe: Rebirth Deluxe Edition. Here are the top ones, ranked by their Reddit score. 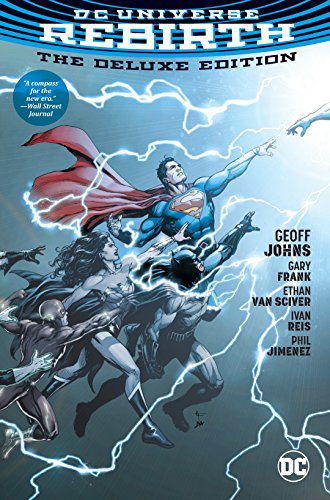 This is the reading order for a modern Barry Allen. If you're interested in the best of the best Flash stories and the greater Flash mythos, Flash in the 90's to mid 2000's is the best era of the Flash. Mark Waid's Flash currently has 1 trade out with trade 2 coming out May 2nd. The first trade is an origin story about Wally West, the second trade is a story called "The Return of Barry Allen" which is the best Flash story of all time. Waid's run is the best Flash run of all time and the third trade is coming out in the Fall. Grant Morrison and Mark Millar wrote a short zany run in the middle of Waid's run. It's one trade long and worth the read. Lastly, Geoff Johns Flash run is phenomenal. It's the second best of the three and there are currently three trades out. It's a bit more serialized than Waid's run, which is a plus. Waid writes Wally a lot better than Johns but what Johns has over Waid is phenomenal and relatable villains.

Flash Rebirth brings Bary up to speed with the world and shows him dealing with being a man out of time.


The Flash Dastardly Death of The Rogues is the best Barry Allen story, it is a must read


Flash: Road to Flashpoint. This story is pretty alright, the collected version has a lot of interesting one shots and such and it directly leads into Flashpoint. This doesn't get recommended often, but I enjoyed it and I think it should be at least mentioned


Flashpoint kicks off the New 52 and is a decently written Barry Allen story. This leads into the New 52 series


The Flash New 52 Vol 1-4 Collected in this omnibus. This has absolutely stunning art and it's the same art team that did Dastardly Death of the Rogues, the artists also double as the writers and they capture a good Barry Allen in my opinion. This run is great but everything after is pretty mediocre


The Flash Rebirth (2016) is the current ongoing, you can digitally purchase it or buy the issues individually from Midtown Comics (The website) or your LCBS. I'm linking the first volume of this run.

It's getting a Deluxe edition on its own

First of all, there are two ways of reading comics:

So what happened in New 52 is continued through Rebirth up until now and on. But there is a thing: at the end of New 52, a combined Superman story just happened: Final days of Superman (yep you can guess what it means) then DC Universe: Rebirth came then came the new Rebirth Superman title and the Action Comics. If you wanna get the full experience, you can start with New 52 OR just skip that, read ATLEAST Final Days of Superman then move forward into Rebirth. There is another strange storyline called Superman:Reborn that messed things again, won't spoiler anything else rather than the title. As u/colonyofcells mentioned, Men of Steel mini-series (6 issues) is coming at the end of May, if you wanna skip a lot of Superman stories (and Action Comics) then start there and move forward.

Edit: Also there was a story about Lois Lane and Clark just before the Final Days that is important regarding the continuity (if you're interested that much)

The first "Flash: Rebirth" you linked is about Barry Allen coming back to life in the pre-reboot continuity. Unless you plan on getting him a bunch of surrounding comics, it's kinda confusing.

If he's interested in stuff besides the Flash, I'd recommend getting him the DC Rebirth Omnibus, which includes DC Universe Rebirth #1, plus a bunch of prologue issues for all of DC's other books going on right now. These serve as introductory issues for the current runs of all the different books the characters are in right now, see if anything sparks his interest.

I wasn't sure if you wanted to read digital, in trades, or in floppies so here are the links to the trade paperbacks.

Consider your intent/commitment. Think about your favorite shows, movies, books, etc. Reading primarily for enjoyment or encyclopedic knowledge? Collecting? Have the time/resources to read 50 or 500 comics per character?

Don’t try to read everything at once. There’s too much. Forget about catching up, continuity, universes, etc. for now. Older comics can be an acquired taste for modern audiences, so they aren’t necessarily ideal starting points. Writers change often, characters get re-worked, and origins are re-told. Remember, there are many great characters, creators, publishers, etc. to explore.

Pick an interesting character/team and seek their most popular/acclaimed stories. Focus on self-contained, complete stories in one corner of the universe. There will be unexplained references/characters, just persevere or Wiki. Don’t let the tangled web of shared-universe comics overwhelm you. Think of it like solving a jigsaw puzzle one small piece at a time until you finally see the big picture.

Although I read your question as asking about what stories are between The Flash: Rebirth to DC Rebirth: The Flash...

Whats the difference between that comic and this one

December 13 on Amazon, so 2 weeks earlier in comic shops and IST

If you want the complete history of Barry Allen, then I'd suggest: