We found 18 Reddit comments about Emerita Pro-Gest Balancing Cream | The Original Progesterone Cream | for Optimal Balance at Midlife | 4 Ounce. Here are the top ones, ranked by their Reddit score. 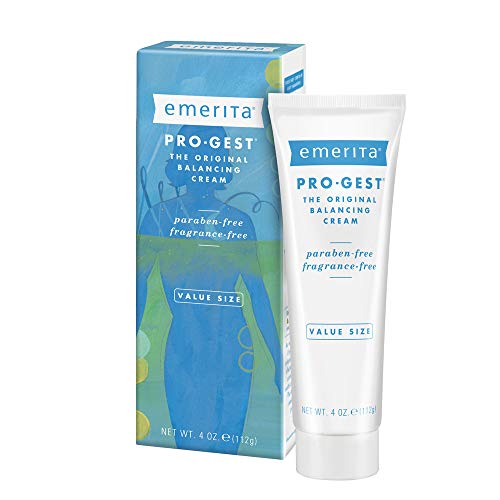 Trusted Since 1978: Pro-Gest has been the #1-selling brand of balancing cream for more than 40 yearsPurely Powerful: Paraben-free formula contains 450mg of USP Progesterone per ounce (20mg per ¼ tsp)Get Comfortable: The most trusted Progesterone Cream for optimal balance at midlifeHighest Quality: Subject of two clinical studies & meets US Pharmacopeia strength & purity standardsCustomers Say: "I noticed a wonderful change right away! This cream really worked for me!"
Check price on Amazon

This is the cream I used. I was about 3 years or so into HRT when i started and I used about a dime size dab on each breast. I could tell something was going on within days since I started feeling the hardness in my breasts (and soreness) that I felt the first few months of estrogen therapy. Over time it did cause headaches if my P levels built up so if I experienced a headache I would stop for a few days. That was really the only cycling I tried long term. i have read that your receptors do get saturated so it's good to stop and I probably did so a few days a month due to the headaches but not on any set schedule. My breasts always swelled about a cup size during those stoppages but then went down. I've never seen a study that linked progesterone to cancer but I guess it's possible. I use it occasionally just becuase it seems to modulate my week estrogen injections and my breasts still swell but not as much. They have been the same size(36D) for many years and don't seem to lose volume when I stop. I did lose about 20 pounds and my bra size went down to 34D(about a cup size difference) for about a year but visually they looked about the same. The nice thing is they never lost their firmness when I lost weight. Glad to help :)

I'm tempted to post a pic of all my blankets... I have three or four which I swap out during the night as I'm freezing when I go to bed but then wake up in a pool of sweat!

One thing that helps my insomnia/palps A LOT - Emerita brand bioidentical progesterone cream. I use about a dime-size dollop, or even less, every couple of days, 3 weeks out of the month (I start it seven days after my cycle begins.... 3 or so days after the crime scene stops. ;))

They say to put it on your thighs but I'm really sensitive to meds so I put it on my shoulder every other night before bed... can't say enough how much it's helped me. Expensive but worth it. The only downside is a touch of nausea, but I find Pepto or ginger tea will alleviate that.

I've used this product before from amazon. It seemed to work ok. I've been meaning to get some more.

Yes!!! I'm using Emerita's Pro-gest cream and have been for the past 2ish months. Whatever brand you use, make sure it uses USP progesterone(from wild yams)! That means it's chemically identical to the progesterone our own bodies make and so is readily absorbed and used.

I got my worst PMDD month ever 3 cycles ago which prompted me to try it out.

It takes about a month to start working. Initially I used it twice a day, every day, then after the first month, cut back to once a day. The instructions say to stop using it when your period starts but that wasn't working for me. I use a little extra in the week before my period and a little less during my period.

My first cycle on it I noticed very mild symptoms, nothing that really ruined my day or started any issues. My period also came a week early that month though which is very strange for me. Not sure if that was from using the cream or not. Obviously that cut out a lot of possible PMDD time for me.

Symptoms for me always start around ovulation with an occasional break between the days of my "fertile window" and the 10 days before my period starts. According to my period tracking app, Clue, my PMDD symptoms should have gone full blown 3 days ago. So far though, I have had 0 emotional symptoms since that terrible cycle back in July. Do you ever get an almost euphoric feeling right when your period starts and all the crazy goes away? Everything is suddenly ok again and life is awesome? That's what I've had for the past 3 weeks straight.

I'm still holding my breath on this and probably will be for the next few months. I've got 5 more possible days of PMDD stuff left for this month and then still one more "trial" month so see if it's truly doing anything for me. A fair warning though, back when my gynecologist listed this as an option for me she said only 50% of her PMDD patients report it being helpful. I'm sure some of that is due to them not using it correctly, not giving it enough time to work, and/or buying a brand that didn't use USP progesterone. If you decide to try it, give it 3 cycles to fully kick in!

Took 20mg bioidentical progesterone(Oral) at 6 months hrt for a month and got nothing.

Tried again with this stuff(See link) which is about the same strength and got a lot of growth. (Went from a 32 AA to 32 A in about 3 months but then had to stop hrt late march because ffs with Dr Z.

I just restarted hrt 2 weeks ago and no soreness or anything yet. Hoping for more growth. Cmon b cup!


(No other sides although it might make me sleep slightly easier.)

The best way is to get a dr to prescribe a pharmacy strength version but I see people recommending this from amazon for a lower strength version that’s otc https://www.amazon.com/Emerita-Pro-gest-Cream-Tube-Packaging/dp/B000IMQE5U

I've used both. I have actually (personally) seen better results from the over-the-counter cream than the prescription. I use this cream.

Different people see different results from different administration methods, from what anecdotal research I've managed to piece together on my own. From the personal accounts I've read, as well as my own, I have seen a trend towards the cream being the method that has given "impressive" results (although I'd rather not call it miraculous, as it's purely anecdote and whatever the mechanism for progesterone-related breast development in trans women is, it is woefully underresearched. Maybe something to do with oral bioavailability of progesterone/two passes through the liver being more de-potentiating than oral usually is? Maybe it's actually nothing and there's a huge selective bias towards people sharing results when they see results that would've happened anyway? Who knows, I ain't no biologist).

I have also used the oral prescription. It did help a little bit, I think, but not very noticably so. Some people have seen results that they've been extremely happy with, some people have had the same experience as me. It was nice for mood and sleep. If you go the oral route, make sure you get bioidentical progesterone (prometrium or a generic version). medroxyprogesterone, the nonbioidentical version, is very likely to fuck your shit up; it works for some people, but overwhelmingly people have bad experiences with it.

I'd start with the cream since it's easy to get ahold of, and try a bioidentical oral one if that doesn't work for you after a few months. Make sure you run it by an endocrinologist or doctor who you trust to make sure you don't have any preexisting conditions that progesterone could exacerbate. Also, warnings about cream:

I just started using this one about 4 weeks ago and have noticed a significant amount of growth (for that time). I apply about a dime-sized dollop every morning to each breast.

I'm on: ~3.6mg E/5mg Cypro per day, for about 22 months, and 100mg Oral Progesterone for about a year, and was about a 36AA four weeks ago. I haven't measured since I started, but I'm definitely start to fill into a 36B at this point.

Yep! On Amazon: https://www.amazon.com/gp/product/B000IMQE5U/ref=oh_aui_detailpage_o01_s00?ie=UTF8&amp;amp;psc=1
This one has the highest concentration from what I could tell on Google. It is marketed to menopausal women I think.

This is the exact one I'm talking about: http://www.amazon.com/Emerita-Pro-Gest-Cream-tube-PACKAGING/dp/B000IMQE5U

Happy to share! I used/am still using Emerita Pro-Gest (http://www.amazon.com/Emerita-Pro-Gest-Cream-tube-PACKAGING/dp/B000IMQE5U/). A quarter teaspoon twice a day. If you search for the word "pregnant" within the Amazon reviews there are lots of reviews from people who used it to conceive, in what dose, and for how long. Good luck!

This is what I use. Emerita Progest. Can order it online, or you can pick it up in more natural food stores where the vitamins are. My local compounding pharamacy recommended it. If you have questions, fire away! :)

Yes. I started using progesterone cream from days 14 of my cycle-period. 40mg/day. Estrogen dominance is often the reason for Pms/PMDD, but western medicine doesn't often acknowledge it. This stopped for me once I used the cream. I use Emerita Pro-Gest Balancing Cream.

the ingredients is not on the list, it's a fertility cream that i'm trying to get for a friend

there are alot of similar things in uk, just that they all sound fishy