We found 11 Reddit comments about EternaBond RSW-4-50 RoofSeal Sealant Tape, White-4" x 50'. Here are the top ones, ranked by their Reddit score. 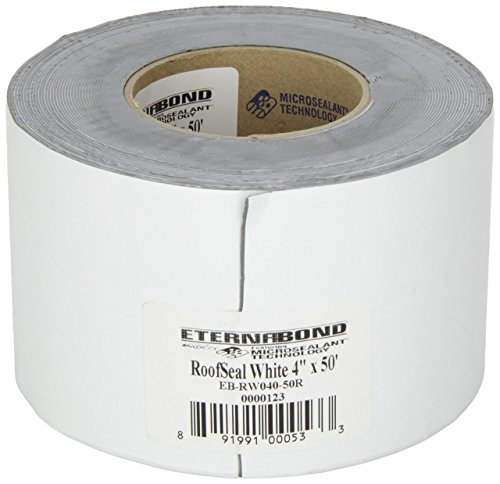 Ideal for use in sunny environmentsSimple installation only requires some surface preparation before useThe elongation factor is very high, which permits RoofSeal to expand or contract with changing conditionsAdhesive side has a silicone lining that prevents it from sticking to other surfaces before applicationSize: 4" x 50'Fit Type: Universal Fit
Check price on Amazon

You certainly can. It's definitely recommended to not join liners if you can possibly help it, but if you do it right the seal will be stronger than the actual liner. Needs to be done on a warm and dry day. Needs to be cleaned thoroughly, and you need to use a roller to make 120% sure that it's all stuck together correctly.

I used to use this product

Do you have hookups on the lot? Electricity, water, and sewer? I'd definitely recommend thoroughly cleaning it and then going over the seams with EternaBond.

That looks to me like an installation of an "insulated patio cover".

The lag is supposed to be self-sealing, but both under and over-tightening can cause the seal to fail, and the rubber gasket does degrade over time.

When I had my patio roof installed, the materials wholesaler strongly suggested to my contractor (who was new to patio-room stuff) that he cover the seams and hold-down lags with "eternabond" tape in order to avoid callbacks. We discussed this, and I elected not to have the seams taped. Later, when leaks appeared, I found 50' rolls of the 2" wide eternabond and used it to seal the seams between panels and used circles of the 4" version over the hold-down bolts. It's now 8 years later, still leak-free. In hindsight, knowing that the roof would mellow from bright white, I probably would have gone with a black or ivory color tape.

Do not use silicone. You will regret it later when it is time to re-seal your roof.

You will need to get on the roof and reseal the skylight, and, if it were my roof, I would go ahead and do the whole thing if it's needed. You can find plenty of videos on Youtube on how to do this.

Lap sealant can be bought on Amazon (Dicor Self-Leveling Lap Sealant 4-pack), and I would recommend two other items as well; Butyl Tape for laying down as an extra barrier under the roof equipment, and a roll of Eternabond for emergency repair.

Flex seal tape will leak. It did on my 96 Jayco popup and forced me to rebuild the entire roof frame. Look into Eternabond. Its expensive but it is the best version of seal tape you will ever find and EXTREMELY sticky. Ive had it on my popup for 2 years now without a drop of water getting through.

Otherwise, the camper looks to be in great shape! Have fun!

Don’t have any advice on an inspector but can lend a hand on tools. I did a bunch of projects in my travel trailer and kept an eye on which tools I was using all the time.

Eternabond Sealant tape - easier than dicor caulk and read really good things about it for sealing roof or wall leaks.

Screwdrivers (obviously!)
number 2 square driver (most of the screws in mine are, not sure about other brands)
Socket set
Electrical tape
Electrical pieces (wirenuts, spade connectors)
Multimeter
A few shark bite plumbing fittings (coupler, cap)
A handheld saw, one that takes sawzall style blades and an assortment of blades.
Small sledge hammer, sometimes called an engineering hammer

This one may be a bit gross, but a few of the long wooden sticks like you’d use for roasting marshmallows, the thicker and longer the better. We wound up having the dreaded poo pyramid at the base of the toilet from not using enough water or too much paper. The stick was flexible enough to break things up and bend around the corner to help move things back down into the tank.

Hope that helps a little bit!

Good luck with your search

For reference I looked up that tape. Wow, it is expensive. I think I'll stick to my silicone caulk for now. http://www.amazon.com/EternaBond-RSW-4-50-White-Roof-Seal/dp/B002RSIK4G

Could give RV repair tape a try. Mind you once its on, its NOT coming off. Its also not cheap, but you shouldn't need much. Id suggest thinking of something to put under the tape to gap the hole, of course. Give it something more to stick to and to keep it from flexing. Maybe even thin sheet of plywood.

Or even some scrap kitchen flooring and use rv tape to hold it down.

Just some ideas to get you thinking

Cuts drywall like butter. Great job on the vents. You can put this product over your caulk surrounding the vent, hitting the top of the van and the vent itself, adding additional years of proven protection to your job. A lot of people with motor homes love this shit. As per the reviews.
https://www.amazon.com/dp/B002RSIK4G/ref=twister_B01JRKPJ0E?_encoding=UTF8&amp;amp;psc=1

In a similar "band-aid but could actually last a really long time" vein, there are some amazing tapes out there:

When I had the one on my first 5th wheel apart, I wrapped it with EternaBond tape then put the hose clamp over that. Not cheap, but you should have a roll of it in the camper anyway. Great if you have to make an emergency roof repair.