Reddit reviews Game of Mates: How favours bleed the nation

We found 4 Reddit comments about Game of Mates: How favours bleed the nation. Here are the top ones, ranked by their Reddit score. 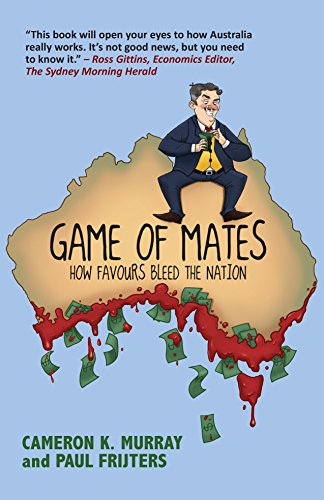 4 Reddit comments about Game of Mates: How favours bleed the nation:

&gt;politicians and political parties are allowed to have far too much vested interests in certain sectors of the economy which is having too much influence on political process

This is where you are wrong, it's not a problem of individual corruption but group corruption, where the people go back and forth from government to private industry, all doing favors for each other in expectation that favors will be returned later, often called the revolving door.

&gt;Game of Mates will convince you that seeking favours, be they planning approvals or the right to build casinos or toll roads, is what makes Australia go round. Certainly it makes Australia's job market go round. Local council planners move into positions with developers, state and Commonwealth government ministers take up positions with companies they used to regulate and former Treasury officials sit on the boards of private banks. The book's appendix on movements in and out of the offices of mining ministers is eye-popping.

Another great book on a topic you mentioned, the privatization of Australian government services, is Governomics: Can we afford small government?

&gt;People have good reason to demand decent public education and a well-funded health system, to yearn for an economy that doesn't trash the environment or for a smaller gap between rich and poor. Almost without exception, sound economics is on their side.

&gt;We've grown used to public debates that pit people and the planet against an abstract, distorted image of 'the economy', but it doesn't have to be this way. Governomics shows that an emaciated state is bad for business, and that standing up for government means standing up for a public sector that truly serves the public.

&gt;'Everybody knows governments are wasteful, incompetent and a drag on the economy. But if you're not sure that's true, read this book.' Ross Gittins, Sydney Morning Herald and The Age

Australia has the least “overt corruption”. When you dig deep, it’s actually quite a corrupt country on many scales, it’s just extremely subtle, well hidden and stays just below surface enough to not be illegal. Technically it’s not corruption, but it’s VERY dodgy and very harmful to the wider public.

Not convinced? I urge you to read a book called Game of Mates by Cameron Murray. A serious eye opener that will make your blood boil.

Everyone needs to read this book: