We found 3 Reddit comments about General Hydroponics FloraNova Grow & Bloom Quart. Here are the top ones, ranked by their Reddit score. 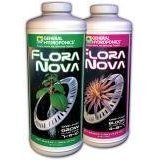 The marriage of hydroponic & organic gardening methods.Extremely easy to use.Outstanding for all plant types.Superb for Hydroponic, Soil-less, and Soil Cultivation.Super Concentrated and pH Stabilized.
Check price on Amazon

It's a 16oz single-use water bottle, top 1/3rd cut off, flipped. The rockwool sits inside the top portion with clay pebbles surrounding it to keep it centered. I start with a weak "Grow" solution from General Hydroponics (Nova series - https://amzn.to/2XFwH84 ) and add enough until the rockwool is absorbing the solution from the bottom portion of the cup. Once you have a root hanging down you don't need to fill it nearly as full. Eventually you get roots like that.

Pretty similar to this: https://www.youtube.com/watch?v=uRY3fHXtKOM

I already mentioned the fertilizer/nutrients in #4 as you had asked.

Home Depot / Loews probably only carry lawn variety synthetic ferts like Miracle Grow which are low in potency and only worth resorting to out of desperation in a post apocalyptic world where feces is hard to come across.

If you don't have a reliable hydroponics shop run by responsible people near by, you may have to resort to ordering your supplies:

http://www.amazon.com/General-Hydroponics-FloraNova-Bloom-Quart/dp/B0031FFFEW/ref=sr_1_1?ie=UTF8&amp;amp;qid=1369960283&amp;amp;sr=8-1&amp;amp;keywords=floranova
(I suggest ordering 2 units of this minimum)

Soil Option 2:
http://www.amazon.com/Farm-Ocean-Forest-Potting-Cu-Ft/dp/B000AXPUDE/ref=sr_1_4?s=lawn-garden&amp;amp;ie=UTF8&amp;amp;qid=1369960542&amp;amp;sr=1-4&amp;amp;keywords=happy+frog (This one is preloaded with enough nutrients to last a month; but possibly should be pre-flushed before planting)

The soil may be a little expensive to have shipped; if you don't want to, and absolutely cant find either, then you need find a soil with a high concentration of perlite.

You can probably make one bag work well for two-three plants.

Again, it's all optional. You can just plant seedlings in the ground without potting soil and nutrients and still get buds that will burn; but if you're willing to go all out and save some money in the long term, this is your solution.

EDIT
I see what your asking about fertilizers. It's a bit of a grey area, you can always add soil conditioners and beneficial fungal spores with the intention of slowly breaking down the organics into raw nutrients. If your using organic fertilizers, your essentially more or less already doing this; while synthetic raw chemical nutrients skip the process entirely. You can try packing manure to your spot and mix it in all you want, but I don't see a reason to bother with it if you already plan on adding nutrients regularly.

A professional with experience could experiment all they want; but I don't think it's worth the effort.

In regular farming; fertilizer (as in soil amendments) are normally used as a fix-all solution; while feeding nutrients is the opposite solution. They aren't really used in conjunction that often. How ever some people are really big on the whole true living organics thing; Conditioning the soil with compost, beneficial fungi, enzymes, then they brew teas and use them when they water as well as foliar spray.

On the other hand, if say you were planting in the native soil, and it had a really low pH, you could mix in lime, better yet mix in perlite so the roots get oxygen. For nutrients blood meal could work but I've never used it. Bone meal is really good for roots as well. This is all subjective, and it's up to you to figure it out.

Hihi. I don't have any experience with coolers, although I imagine I soon will. I've heard of using 2L soda bottles filled with ice to keep the water cool, I want to try that before I try chilling the water, just because the water cooler is not cheap.

20 gallons is almost what I'm running for 4 plants, you say you have 8 buckets + a res, this leads me to believe you're growing small plants in a small area? If you give your plants what they want, with DWC your plants will grow fast. Like, see-daily-change fast. And they need a lot of water to sustain that kind of growth. I'm not sure exactly, but I think we're about 30-45 days from when we first put them in the pots (we germinated in rockwool) and the plants drank 5 gal of water in 5 days. I'm not sure how big you're going to make your plants, but big plants drink a lot of water.

It's hard to judge whether 1000 watts will be enough until I know how far apart your plants will be. I use 1200 watts in a 4x4 tent, which is not advised. I had problems with burned bud last grow and I was constantly sucking cold air from outside to cool the room and venting out through the lights to cool them off as much as possible. My CFM was lower than yours, and worked adequetly; I would have rather had more, but it worked. I will definately need to run an air conditioner during the summer. I don't see any reason why your balast and light tube combo shouldn't work, very similar to mine, although I've been told I can get better light coverage and more energy to the plant if I get a nicer hood. And a nice hood can be got for ~$120 Greners.com reflector test. I'll be upgrading soon I think.

I can't say I've tried using both bulbs at the same time, but I would think that the cost of adding another hood would not yield sufficient increase in production. That being said, if I was growing eight plants in a bedroom-sized area then 2000 watts would not be unreasonable. I've had good luck with running one type of bulb at a time and switching when flowering to the other.

I have a ~250 gph water pump and it was too strong for my setup, I had to limit the flow into the pump so I didn't overflow. I like having my water shooting around as fast as possible to create more air bubbles in the water, but it caused some problems. I have 3/4 tubing for both in and out, but I would rather have larger tubing for my return, but my pump is on my res output line, not my return.

I used the General Hydroponics 3-part line last grow, and I'm using their FlorNova product this time, which is supposed to be all the nutes in one product. It seems to be working great so far, although it does dye your roots. You won't get shiny white roots with this, but you sure get big healthy plants. I used some Rhizotonic from day 1 (after germination) to about day 21 when the roots reached far out of the net pot and down into the bucket. Last time my roots choked out my airstones, I had to cut them out to keep bubbles coming, so I didn't want any more roots than I needed. I would definately get a screen so the roots don't go down the tubes. It's less that it's bad for the plant, more that it jams up the flow of the water.

We used 3" rockwool cubes, which work just fine. The roots were barely visible out the bottom of the cube before we transplanted them. I made sure that the water was very high the first day (up to the bottom of the cube) then let it evaporate down for the first week. If the roots can't reach water, they will grow down to try to find it, which is what we want at first. During Germination they got water with about 100ppm and a little bit of rhizotone. During that first week in the pot they got 300-400 ppm. Second week was about 500ppm. By day 28 we were at 1000-1200 ppm and the plants loved it. We're keeping it about 1-1.2k, but might go higher later. I'm measuring the old water before I add more water/nutes, and it tends to go up in PPM, which means that the plants are eating more water than nutes. Once they start to eat it all I may increase it.

Hope any of that helps, not an expert, just like doing things right, so more information is always welcome. Have you done much growing before?