We found 6 Reddit comments about Generation X. Here are the top ones, ranked by their Reddit score. 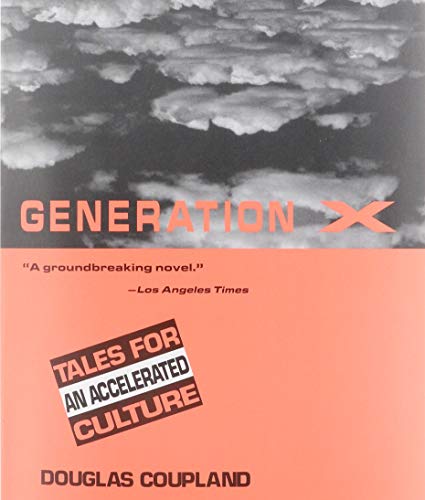 There's a very Vapourwavy-feel around the seminal Nineties novel Generation X. The characters in that have a similar nostalgia for the 60s and 70s that never were...

Maybe this is a silly question, but have you read Generation X, by Douglas Copeland? I read that years ago, when it came out in 1991, when I was in my early twenties. (If you do the math, you'll see that that makes me a hard core Generation X'er.) I remember liking it.

This book came out as I was getting ready to graduate high school and has multiple stories about how people imagined the world ending. It was pretty much me and my friends, only we weren't bartenders in Palm Springs.

It came from this book, here.

As for us - I remember we also started the funny, but horrible "media reference" trend. Watch a movie like Juno, anything from Seth Rogan or Seth Macfarlane, or the iconic "Reality Bites" with Winona Ryder and you'll get the gist of where memes came from.

It is even MORE horrible because if you watch Family Guy or even the Simpsons they use past media references constantly and I realized that some of them I only get because my mom and grandma showed us old movies and I studied history.

Now, they keep doing references from the last century and I am pretty sure anyone born after 2000 who doesn't directly study history or watch old movies and TV has NO idea what the hell is going on with all those takeway bits and flashbacks. It must be weird to watch those shows and not know what 75% of the jokes even mean.

The term originated in a book by Douglas Copeland.

\&gt;The book's title came not from Billy Idol's band, as many supposed, but from the final chapter of a funny sociological book on American class structure titled Class, by Paul Fussell. In his final chapter, Fussell named an "X" category of people who wanted to hop off the merry-go-round of status, money, and social climbing that so often frames modern existence.”

The term Gen X comes from Douglas Coupland's novel Generation X which came out in 1991 but was about twenty somethings: https://www.amazon.com/Generation-X-Tales-Accelerated-Culture/dp/031205436X/

The X in Generation X actually is a reference to Paul Fussell's humorous book about class: Class: A Guide Through the American Status System https://www.amazon.com/Class-Through-American-Status-System/dp/0671792253/ which claimed there was a category X that stood outside of normal class divisions. We'd call them hipsters now. Coupland pointed out that what Fussell described as a kind of classless bohemianism was actually pretty typical for the entire Gen X generation.

I'm sure all this would seem pretty quaint to millennials, but seemed fairly trenchant when it came out. In any case, you could try to throw the Gen Y kids into the Gen X category, but they are pretty distinct based on the fact that they do generally come from broken homes while the older Gen X'ers do not.

I'll just add that I think we Gen X'ers grew up in a time when many things seemed fixed and immutable, particularly institutions, and it felt like opportunities were incredibly limited because of this. Power was pretty well concentrated in corporate hands, including media power. The Cold War was a fixed and omnipresent part of our childhood. If you read Coupland's book, you'll see a lot of precursors to the current millennial pessimism. We really felt like we didn't have a chance in the economy. Sadly, we were far better off than the millennials as, at the very least, we weren't as a generation saddled with really significant college debt.

I think at least for the Gen Y'ers I know who were admittedly early to the internet there was and is a lot more optimism about opportunity just because the internet was clearly a disruptive force for all the major institutions of my youth. Their entry into the world as adults was coupled with a new set of jobs and a radical remaking of the media landscape. I'm sure that is to some extent locale specific, of course, as it hit the creative coasts first and started having an impact elsewhere later.