We found 21 Reddit comments about GunVault Speedvault Biometric Biometric Pistol Safe SVB500. Here are the top ones, ranked by their Reddit score. 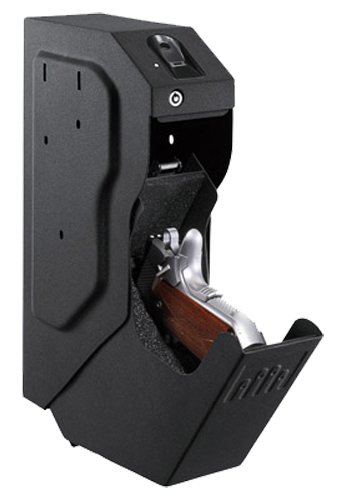 In the United States our national average police response time is 11 minutes. That's a long time if someone is armed and breaking down your door. People really shouldn't rely on the the police to keep them safe.

Yeah, I've thought about that too, it would take me several minutes to access my long guns. I normally have to do the combo 2 or 3 times in very un-stressful times, but now imaging trying to do it under extreme stress. One reason I keep my bedside gun (Glock 41, fully loaded and light attached) in a quick access safe that takes four rapid button presses to unlock. I can do that one in the dark, under stress in just seconds. SVB-500 GunVault. Still secure enough to keep a 5year old away from it, but I can get it when I need it.

It's only $155.95 on Amazon, but Gunvault has it for $444.99. That's cheap it if can get such a huge discount on Amazon. Cheap materials with a circuit board made in China.

Where in the East Bay? We're damn near neighbors.

The P226 is an excellent pistol, one of my personal favorites. However, the 9mm round is a bit on the hot side so you should use specialty rounds, e.g. hallow point, with less penetration. My home defense pistol is an H&amp;K shooting .45 ACP.

I suggest you also look into a quick open lock box. Something that you can open quickly but is still secure. I have one similar to this, https://smile.amazon.com/Gunvault-SVB500-Speedvault-Biometric-Black/dp/B006OGOHD0/ref=sr_1_10?keywords=biometric+gun+safe&amp;qid=1559011515&amp;s=gateway&amp;sr=8-10, but you have to remember to change the battery every few months.

I have no opinion of police surplus guns as I've never even looked at them.

Wait for this http://www.amazon.com/Gunvault-SpeedVault-SVB500-gun-safe/dp/B006OGOHD0 to go on sale and get it instead.

I've got 5 (yes five) little girls, all from 1 year to 8 years old. I know the struggle because they see their dad and mom open/concealed carry daily and they're interested.

First for the gun storage: get a Gunvault SpeedVault SVB500 for pistols kept next to the bed. Mount that to your bed frame or night stand and it'll keep little fingers away.

Another option for storage that will be coming available this year (and works for rifle or pistol) is the IdentiLock. They're not cheap and I can't find a review of them, but I'd be willing to throw down $319 to test it.

The second part is child firearm training. This is not meant to be for ideal scenarios but as a last resort. You need to wait until they are intellectually old enough to comprehend this kind of conversation. But when it comes time, explain to them the dangers of guns and how kids die every year from playing with their parents' guns. Tell them that if they ever find a gun while they are alone to come tell you or mommy about it - for which they will receive a huge reward! My kids get 5 bucks and an instant trip to the ice cream store if they ever accidentally find an unattended gun.

We've never accidentally left one out, but one time my wife and I did intentionally leave an unloaded, triple checked airsoft gun out to see if they would follow through on what we told them to do. Within 2 seconds of walking into the room where we put it, my 7 year old daughter came running directly to me to tell me the gun was out. She got instant high fives, $5, and a double scoop ice cream cone. I pray to my higher power that I never accidentally leave it out ever, but I'm somewhat comforted that we've got a backup plan for it as a worst case scenario. But we rely on safe gun storage always.

It was a flash sale. tis over now:( I’m sorry, friend.

The fingerprint scanner on a $700 iphone is meh and you want to trust that technology on a $180 quick access safe containing the tool that can save your life?

There's ways around all alarm systems and doors. If they want in they'll get in. And there's tons of safes that are mounted under desks, on head boards, or easy and quick to grab places that you can open very quickly with finger print activation or a quick access code.

&gt; I don't see why we couldn't direct that superfluous military funding to something like reliable smart guns, which would be extremely beneficial to the military and civilians.

This is debatable and it all depends on how we want our tax dollars being used. Granted that normal guns are not banned, then I'm pretty much okay with the idea since it promotes gun ownership and safety. I disagree about it helping the military for a few different reasons, but do agree that it would be a good civilian product.

&gt; Also, you talk about how speed and reliability are the main reasons that smart guns just won't work, but then you say that keeping a Glock in a safe is preferable. But my dad used to have a gun safe, and I guarantee that it would take longer for him to respond to a home invasion by retrieving a gun from a safe and firing than it would for him to unholster a smart gun, go a retina scan or some ridiculously inefficient authentication method, and then fire.

I mean in the context of carrying on your person - reliability being that the gun will fire when the trigger is pulled and you won't have jams, speed being that the safety mechanistic (if there is one) needs to be instantaneous to disengage.

There are safes that are biometric that quickly and automatically present your gun in an easy to grab fashion such as this. Most gun owners keep something like that on their nightstand.

&gt; Leaving a weapon in a safe is basically putting all of the responsibility of being reliable in your own hands, hoping that you will either A) be packing and have it loaded when you need it, or B) be close enough to your safe, and cool enough under pressure, that you will have sufficient time and notice to defend yourself.

You're either sleeping and the gun is at your nightstand (or within reaching distance), or you are carrying, which is whenever I'm not sleeping. When I'm sleeping, I can have my gun ready in about 5 seconds. When I'm out in public, it's always on my person.

&gt; I just don't see how a smart gun, even one with something as time consuming as a retina scan, is less reliable and rapidly available than a gun in a safe.

You're making a general statement about the gun being in a safe and being unreachable when that isn't normally the case. Gun owners keep their gun at their nightstand, or in a biometric safe, or a similar safe that is quickly opened (and it's always within reaching distance).

The problem with a "smart-gun" isn't for when you're sleeping. The problem with a "smart-gun" is when you're pointing the gun at your target and it not firing reliably when you need it to be. In other words, less than a quarter of a second could mean death. Any jam could mean death. This is partly the reason why law enforcement uses Glocks because there is no safety mechanism to disengage (and they're just flat out extremely reliable and always shoot).

&gt; A smart gun would allow you to carry any time, anywhere, with almost no fear of your gun accidentally killing someone or not being available when you need it.

You're advocating a "smart-gun" for the wrong reasons. The advantage to a theoretical "smart-gun" is that it can't be stolen and used by someone else. Guns don't have any issues with accidentally killing someone - the gun is only going to fire if the operator pulls the trigger, that's the way guns work.

&gt; If such a smart gun was made, I can almost guarantee that it would be more reliable under pressure than the average human responding to a true threat.

It wouldn't, but I'm happy to elaborate why you're wrong. A gun is reliable because 1) It is well designed, 2) It is battle-tested and proven, 3) It doesn't jam. A gun's reliablity is purely mechanical and has absolutely nothing to do with performing under pressure.

The problem with "smart-guns" is because creating such a gun would require a complete overhaul of gun design as we know it. Guns include a lot of parts - think of a gun like an old-fashioned watch. There are hundreds of modern guns that aren't reliable, which is the reason the Military and Government only use certain guns. New designs for modern day guns take an average of around 5-10 years to design. Designing a "smart-gun" would require at least twice as much time and would definitely not meet the military's standard of reliability (coincidentally, a civilian's standard for reliability is the same as the military because life is that valuable) because the technology just doesn't exist. It would be the equivalent to colonists with their muskets (the ones where you smolder a wick to the gunpowder) in the 1700s inventing an AR-15.

&gt; The limiting factor in reliability would be the shooter 99.99999% of the time, not the gun. If the shooter is more reliable than the gun... Well that's a scrapped design.

Reliability is always the gun, never the shooter. All the shooter does is pull the trigger. Reliability is a gigantic issue with existing modern firearms because not all firearms meet that standard. My point is that reliable firearms are a challenge as it is already. There are only a few guns that I would recommend as a daily carry.

Not offense, but I can tell that you don't know much about guns, but I'm happy to answer your questions. :)

People would really leave it just sitting on their nightstand? I grew up in an urban area full of crime and that still sounds completely unnecessary.

Regardless, you can mount this next to your bed and you'll be fine.

I keep all of my rifles and guns in my big safe in my walk-in closet. I keep my G23 in a Gunvault Speedvault SVB500 attached to the side of my nightstand.

It shouldn't be mandatory, but laws should allow teachers who already have firearm training to keep a secure weapon near their person, under their desk or something, if they want to. Something like this. In my high school I could name at least 5 of my teachers who were competent with firearms and, had the law allowed, would keep something like this in their class. You don't have to tall any kids it's there. It could save a kids life someday.

I think the safes with buttons right now are much more reliable than biometric safes. This safe pictured is a Gunvault Speedvault SVB500, which is known to sometimes have problems at times. However, there is a manual button version, the standard SV500 which is the vault I have next to my bed every day and is much cheaper.

It's not the most secure, but if you want to keep a bedside gun out of reach of kids or friends who don't know how to properly handle firearms, it works great.