We found 6 Reddit comments about Hell's Angel: The Life and Times of Sonny Barger and the Hell's Angels Motorcycle Club. Here are the top ones, ranked by their Reddit score. 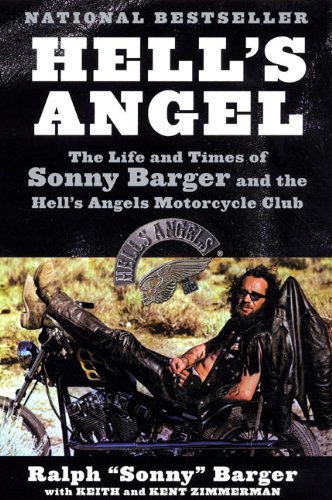 6 Reddit comments about Hell's Angel: The Life and Times of Sonny Barger and the Hell's Angels Motorcycle Club:

The incident is covered in detail in Sonny Barger's "Hell's Angel". The book is a solid read and an interesting (albeit one-sided) view into MCs of that era.

That is Doug "The Thug" Orr. He spent a good part of his life in prison. Including stints for armed robbery and shooting his girlfriend in the head. He died of a heroin overdose in prison at the age of 40. Reference this excerpt from Hell's Angel: The Life and Times of Sonny Barger and the Hell's Angels Motorcycle Club.

Here is another photo taken by Penn at the same time as the posted photo. I am not sure who took this photo.

&gt; But Hell's Angels started riding Harley-Davidsons mostly because, unlike today, they didn't have much choice. In 1957, it was either ride a Harley or settle for a Triumph or BSA. They'd already stopped building Indians. It's always been important for Hell's Angels to ride American-made machines. In terms of pure workmanship, personally I don't like Harleys. I ride them because I'm in the club, and that's the image, but if I could I would seriously consider a Honda ST1100 or a BMW. We really missed the boat not switching over to the Japanese models when they began building bigger bikes. I'll usually say, "#$% Harley Davidson. You can buy an ST1100 and the mother#$%er will do 110 miles per hour right from the factory all day long." The newest "rice rockets" can carry 140 horsepower to the rear wheel, and can easily do 180 miles per hour right out of the box. While it's probably too late to switch over now, it would have been a nice move, because Japanese bikes today are so much cheaper and better built. However, Japanese motorcycles don't have as much personality.

—Hell's Angel: The Life and Times of Sonny Barger and the Hell's Angels Motorcycle Club

Hell's Angel by Sony Barger, who was President of 81 from the 50s through the 70s.

He talks about hippies in his book. He mentions the merry pranksters as well, and they like the Merry Pranksters. He also mentions how HST introduced them to acid.

One thing that did stick out is that they got a long with San Francisco hippies, because they were just bums hanging out in the park, getting high, like them.

When they met Berkley hippies, who they felt where more about politics, and those politics where anti-American, they didn't like 'em.

that book is calling your bluff

Here's a list, off the top of my head - I know all these are on my bookshelf, but I'm probably missing a few more:

Freedom: Credos from the Road by Sonny Barger

Dead in 5 Heartbeats by Sonny Barger

Under and Alone by William Queen

No Angel: My Harrowing Undercover Journey to the Inner Circle of the Hells Angels by Jay Dobyns

The Original Wild Ones: Tales of the Boozefighters Motorcycle Club by Bill Hayes

Ghost Rider: Travels on the Healing Road by Neil Peart

The Masked Rider: Cycling in West Africa by Neil Peart

Against the Wind: A Rider's Account of the Incredible Iron Butt Rally by Ron Ayres

Shop Class as Soulcraft: An Inquiry into the Value of Work by Matthew B. Crawford

Shovelhead Red-Ridin' Out by Roy Yelverton

A Twist of the Wrist 2: The Basics of High-Performan​ce Motorcycle Riding by Keith Code


Zen and the Art of Motorcycle Maintenance: An Inquiry into Values by Robert M. Pirsig - Still my favorite. A high school english teacher bought it for me when he found out I had just passed my motorcycle road test. I've read it at least 15 times, and get something new from it each time.


But the best recommendation - Buy the FACTORY SERVICE MANUAL for your bike and read it. Read it often, until you can almost turn to the exact page for each procedure.