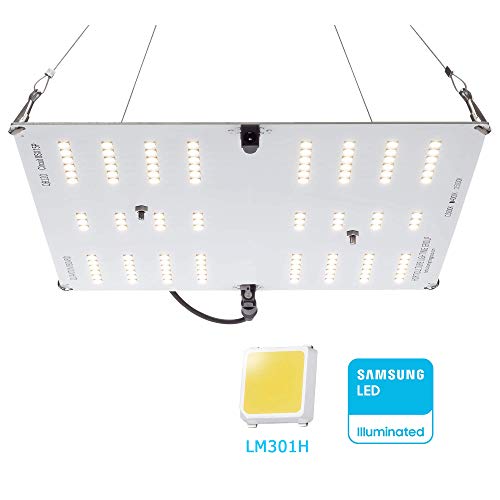 this, and it’s cheaper.

This hobby could really benefit from learning stuff from weed growers.

Actually it says 70w even lower on the same page.

65w of QB lighting will beat the fucking SHIT out of that 80w (or 70w) purple light for not too much more money.

you can also go to alibaba and get even more watts on a QB for not too much more.

something with a little more power , they got 100watt (20w) versions of these bulbs that are a lot bigger on amazon but a panel is gonna be the best bang for your buck , These ones are cheap and efficient

Best option within your price range:

If you have these hanging in the open they will annoy you with it's blue/purple colors and are not good for your eyes. Try getting full spectrum LED.

Look up Quantum boards from horticulture lighting group or Atreum Boards, Amazon may not have them. They are generally more efficient and give off nice white light which will not annoy you and even brighten up the room!

A Quantum Board 65 Kit (65Watt real draw) is about 100$ and available on Amazon and should be enough for a first light but probably underpowered for 4x4 but for half shaded plants this will work fine. Most use them to grow weed which likes a lot of light. Veg/bloom switches are mostly for weed, yes.

But sure, the QB are a bit bare and not that pretty yet really lightweight aesthetically...so who knows.

The Maxsisun 300W has about 130W real draw (the 300W is misleading since it's just an euivalent to HPS lights. So it draws 130W which is equivalent to a 300W HPS light) but is probably less efficient than the QB.

I'm growing Chilis with a DIY Fixture with full white LED comparable to the QB ones. I started out with a Viparspectra 300W (basically same as the Maxisun) so i know em both. Gonna take the Viparspectra apart soon to exchange the LED to full white ones. Will never touch the blue/purple lights again :D

They don’t need them - they don’t get hot only “warm” and they are full spectrum which means you have a grow and bloom light. Very efficient at creating light and spread and cost effective :-)

Let me know if you want to know more!

Good enough to cover a 2x2' space if you're not looking for anything wild. Ive pulled more than a quarter pound under a "300w" blurple led panel, so expect similar possibilities with the hlg 65.

two of these combos or however you want to do it.
https://www.amazon.com/Quantum-Board-Grow-Bloom-4000K/dp/B076QDKVDZ

Also, you could look into DIY LED lights to save some cost. Ledgardener.com has good info.

These are exactly the kind of answers I'm looking for! Anything to cut down on noise and heat is great, as for quantum boards, will something like this work or would I need to invest a bit more? And would leaving the flap on the tent open allow light to leak?

Edit: don't worry about the gallium aluminum arcenide, it is encapsulated in acrylic plastic &amp; not going anywhere. Just like a phone or a computer 😆

I am just getting into the hobby so I don't have any real results, but I posted the same question here a few weeks ago and was recommended this: https://www.amazon.com/Quantum-Board-Grow-Bloom-4000K/dp/B076QDKVDZ?ref_=bl_dp_s_web_18674157011

how many plants? full mature plants or babies for transplanting? Budget?

HLG quantum boards great. https://www.amazon.com/Quantum-Board-Grow-Bloom-4000K/dp/B076QDKVDZ is good for like 1 full size plant or a few smaller ones, or a few trays of seedlings.

But if you want to get a big boy you can get a 1000W Double ended HPS. https://www.amazon.com/VIVOSUN-Ultrahigh-Reflectivity-3-Mode-Adjust-Reflector/dp/B07MYQFMHW that will light up your whole shed and heat it lol. good for like 4+ big plants or lots of smaller ones or lots of trays of seedlings.

For mother plants and vegging in general 15w/ft² of high quality LED would be sufficient, T5 somwhere about 30w/ft².
This smaller version of the Quantum Board runs on 120 diodes at about 60w and provides enough light for a 2x2 for veg.
For smaller footprints you can DIY a cheap and effcient light
4000K works just fine, 6500k may keep the internodes too short

The horticulture group is the group that sells quantum boards. They are a online group that ships them out. You will find debates and talks about the horticulture group and their quantum board mostly on weed forums as a lot of their grow lights are 4k and 5k lighting. I personally found out about them on hotpeppers reddit. This is where I got mine: https://www.amazon.com/gp/product/B076QDKVDZ/ref=ppx_yo_dt_b_asin_title_o04_s00?ie=UTF8&amp;psc=1

Found it on amazon

I need to decide on these vs t5’s

This one? My ambient temp is going to be in the low 60s-40s and maybe lower so the light choice shouldn't matter up to a point, I just want to minimize heat just as a preventative measure since my tent is in a smallish closet and I'm only gonna run one plant at a time. I already have a free bulb so I was gonna buy two more but the final price equals the price of the board. However, I will humor you. Given the lack of reviews, can you justify your claim ?

So would this be a solid system for my tent size? https://www.amazon.com/Quantum-Board-Grow-Bloom-4000K/dp/B076QDKVDZ

Those quantum boards look easy and somewhat affordable. Would something like this work for vegging a 4x4? HLG 65 Quantum Board LED Grow Lamp Veg &amp; Bloom 4000K https://www.amazon.com/dp/B076QDKVDZ/ref=cm_sw_r_cp_api_i_c-3-AbXGSCNSP from what I’m reading the actually power consumption is only 99 Watts? Thst doesn’t seem like enough to do anything

Lot of people seem to be using these lights.

Yeah your tent is the right size for flowering 4 medium-large plants or 9 smaller ones (like if you took clones of a photoperiod strain). Anyway, 3 autos have a good chance to not even fill up the whole space, which could be good for your first run not having to invest as much in lights all at once.

"Quantum board" specifically is a name brand by the company HLG that I mentioned in the previous post. They're really good and use the highest efficiency LM301B Samsung diodes but require a bit of assembly unless you want to pay a whole bunch extra. No soldering or anything though, just some screws and wire connectors This 260W kit for $350 would cover most of your tent at a full flowering brightness and spectrum. It would probably require that plus a second smaller light to completely cover the 3x3. Which could work out great if you started off with a small cheaper light during veg for the first few weeks and then add the bigger light later on.

My suggestion if you wanted to do that would either be to start with the small HLG boards you can get preassembled on amazon (two of the 65w $100 HLG65 or one of the 100W $150 HLG100) or one 150W $140 MarsHydro SP-150.
I would not suggest any of the other MarsHydro lights besides the SP-150 or SP-250. Those are their only ones with a proper heat sink and high efficiency diodes. They are not quite as efficient as the quantum boards but are fairly close and are much cheaper than any other preassembled light in this efficiency range with a decent build quality.


Another option with the same type of Samsung diodes as the HLG in another form factor are the chilled logic pucks I mentioned like this 400W 4 puck system for $600 which would absolutely completely cover the entire tent right off the bat and could even be dimmed down while plants are younger.

Heats not really a big issue. They can take colder temps, just not under freezing. If you are in a garage, someplace cold, you should look into building an enclosure, or buying a tent you can heat.

The bigger they get, the more light they need to keep growing. https://www.amazon.com/Horticulture-Lighting-Group-High-Efficiency-Upgraded/dp/B076QDKVDZ/ref=mp_s_a_1_7?keywords=hlg+led&amp;amp;qid=1572995821&amp;amp;sr=8-7

Blurple or full spectrum lights can work, but something like this is way way better. Look into indoor weed growing set ups.

Less money. The viparspectra will pull more electricity but will put out less light.


Thinking of getting this one

Would 165 watts be too much for them? And how far away should i keep each one? The 65 watt says about 20 inches I'm assuming the 100watt will be slightly more

This is within my price range is this a decent one for a few plants?

I have a few different lights but for my jalapeño plant I’m using a HLG 65 V2 4000K Horticulture... https://www.amazon.com/dp/B076QDKVDZ?ref=ppx_pop_mob_ap_share

Would this one be a good start https://www.amazon.com/dp/B076QDKVDZ/ref=cm_sw_r_cp_api_i_rnU4CbD00FPCB

Invest in a better grow light. Something like an hlg 65 would be perfect for you grow space

Might also want to give them some kelp extract as a root booster to fortify.

Not enough light man use way more than 2 bulbs. They are not 50W draw...

Any thoughts on the HLG lights? Many said they are the best on the market right now, wondering if anyone has any experience with them and how they compare? https://www.amazon.com/Quantum-Board-Grow-Bloom-4000K/dp/B076QDKVDZ and https://www.amazon.com/Quantum-Board-Grow-Bloom-3000K/dp/B07C59J8L2 and if you can only go with one color for a mix of plants in a area, is 3000k or 4000k better for everyone and their different stages?

Depends on how much you’d like to spend. An HLG65 would probably be perfect for her, you can find em on Amazon here.
HLG 65 Quantum Board LED Grow Lamp Veg &amp; Bloom 4000K https://www.amazon.com/dp/B076QDKVDZ/ref=cm_sw_r_cp_api_wOz.Bb0FT0XJ0

If you’d like to go with something cheaper I would just try and find something that puts out more than 100 Watts.

I would stay way from any of the cheap Chinese LED lights like Roleadro, Mars Hydro and similar. The light that I would recommend for your setup would be the HLG-65 from Horticulture Lighting Group. This light uses top bin Samsung S6 diodes which are extremely efficient. They put out a ton of light and use very little power. This light also generates very little heat and doesn't require a heatsink or fans. It produces white light at 4000k which is a little warmer then sun light. I recently bought two of these boards and they have fantastic for vegetative growth.

So there are only specific fans that will do that? Every fan I have looked at has pretty mixed up reviews but I haven't seen that mentioned. I'm probably over thinking all of this but this has been something I've been fixing to do for awhile too.

And now I'm looking at this light would this be the better move? https://www.amazon.com/dp/B076QDKVDZ/ref=cm_sw_r_sms_awdo_t1_YRHhDbF4STW1M

Is this what your talking about?

Is there a cheaper alternative?

i am considering these


my tent is 2x4 and 5ft high. The first one is probably too small? Would the second suffice?

In that size of a tent I would 100% just do one at a time and focus on getting as much as you can from it. I've gotten 200g+ from my mephistos. I would get this light https://www.amazon.com/Quantum-Board-Grow-Bloom-4000K/dp/B076QDKVDZ


I've been using it for clones and seedlings and it works great.

Maybe a few of these?