We found 12 Reddit comments about Holy Sh*t: A Brief History of Swearing. Here are the top ones, ranked by their Reddit score. 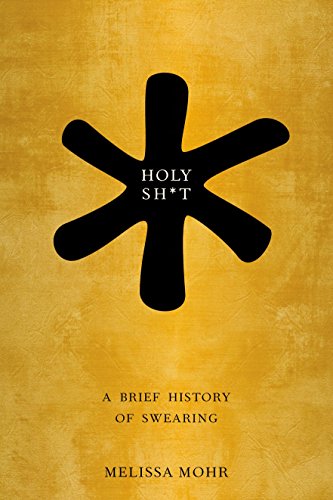 12 Reddit comments about Holy Sh*t: A Brief History of Swearing:

Well with swearing most of them were the same if used in a different context. The two that have somewhat fallen out of favour in the US were Bloody and Bugger. Both of these were considered foul words and were not for the ears of polite company. Fuck was also popular if not printed. It is hard to determine exactly how popular these words were since they were mostly censored. Our only real sources are court records which do not censor for example in New York in the early 1800s there is a record of a woman charged with obscenity and she is quoted as following a group of women and calling them bloody whores who should go fuck themselves.

If you would like to read all the vulgar words used a dictionary was published in 1811 that is on Gutenberg. If you want more information on the topic then I would recommend

Edit I misquoted the trial

The only thing I can find about ancient Egyptian profanity specifically is this /r/AskHistorians post from last year (EDIT: with answers by /u/peter_emrys and /u/Bentresh). Swearing seems not to be very well attested in Egyptian sources, although I have no doubt that your average ancient Egyptian wasn't any more prim and proper than the average modern person.

Melissa Mohr's *Holy Sh**t: A Brief History of Swearing (2013) covers other areas of classical antiquity, but as far as I can tell doesn't touch on Egypt.

Actually according to Holy Shit (a good book, btw), faggot, referring to brooms, started as a synecdoche for women. After awhile people started using it to refer to effeminate men.

There was another word, that I can't recall now (brindle? bendle? something like that), which followed the same trajectory as first referring to a broom, then a housewife, then an effeminate man, but that word is no longer commonly used and died out in the late 19th century.

&gt; People use them in common discourse but only if they lack class

&gt; I don't really care about elite vs. non-elite

Beg pardon kind sir, but if I am not mistaken, those two statements conflict in a way that indicates a lack of consistency.

It is possible your first statement referring to lacking "class" was not actually a reference to social class, tho I find this unlikely because poor educational standards and low IQ are some of the most prevalently assumed traits of the lower class. Do please correct me if I am mistaken.

It is also possible my use of the word "elite" didn't precisely convey the concept of "high class" as I had intended it to. If this is the case, I sincerely apologize for the lack of clarity in my phrasing. I shall endeavor to be more clear in the future.

Those two possibilities aside, the cliche you are espousing lacks merit. Implicit in your statement is your devaluation of humans, who, often for economic reasons, are members of the lower class.

Sadly, I was unable to find a copy of the article I mentioned earlier that I could share. But if I recall correctly it was an article that included, at least in part, a review of the book: Holy Sh*t: A Brief History of Swearing

However, the surprising finding was that the "upper class" were also very likely to use profanity. Another fascinating finding was in business settings, the people more likely to swear, were not only often upper management, but there was a strong correlation with coworkers and employees reporting traits like "honest" and "trustworthy" and "open" in reference to the work-place-potty-mouths.

So as it turns out, the common belief, is lacking the complete picture, and some might go so far as to call such a narrow-minded ideology: parochial.

And the punchline is to quote that George Carlin bit referring to F.C.C. guidelines.

Those who are the most concerned about swearing are those who have something to prove; to impress whoever is above them, and set themselves apart from those below them in the social ladder. This book gives some very interesting explanations.

I don't even know what half of that means!

Holy Shit is a glorious and fascinating book about the history of curse words. I highly recommend it. They got someone with an amazing upper class British accent to do the audiobook and it made for the best road trip I've ever had.

Have you heard of a book called 'Holy Sh*t: A Brief History of Swearing'? The author talks about this belief, but she claims it was in the Middle Ages, not the 19th Century. Swearing vain oaths using parts of God's body was common---i.e. 'by the blood of Christ' or 'by God's nails', that sort of thing, and some religious authorities believed that when someone swore 'by God's nails' they were literally ripping the nails from his hands and causing him physical pain. The author references a number of tracts which warn people that vain swearing on God's body parts was grounds for terrible divine punishment, because they were causing God pain over trifling matters.

I apologize I cannot remember any more details than that from the book but it might be where your questioner got the idea. I also do not know enough about the Middle Ages to know if the author's assertions are accurate or not---I'd be interested what an expert on the medieval period thinks about it.

Here is the book in question.

&gt; Do you think swearing is Taboo?

I feel that you're right, but can't really back that up completely. Well, except the grammar part. On a slight tangent, reading Latin swear words in Holy sh*t was incredibly entertaining to see where most of our curse words come from.

Every culture and language that has ever existed has had profane words. The words themselves and their magnitude are programmed into us at a very early age. Not only are they loaded with emotional context, but they actually trigger a deep-seated neurological response on the part of both the speaker and the listener.

Even people who use profanity on a regular basis have interesting reactions to profane words. You can become somewhat accustomed to them, but they will always hold a slightly different status and weight in your mind. There is something that sets them apart.

What's really interesting to me is how the words that are and are not profane change over time. The Romans for example, were a lot like us. The bad words to them were mostly about sex and bodily functions, although the way they ranked them from most severe to less severe were pretty bizarre by our standards.
In the Middle Ages, people used vulgar terms for shitting and fucking and lots of other acts, but no one really considered them offensive. In fact, some of the earliest translations of the Bible contain words that would shock you, because the people doing the translating simply didn't think of them as bad. In the Middle Ages, all the really offensive terms were religious. Saying "By God's bones!" was every bit as shocking and offensive to them as screaming "Cunt!" in the middle of a church service would be to you and me.
And the list is still changing today. Your great-grandmother probably couldn't say "Damn" or "Ass" without blushing, but she could say "Nigger" without thinking twice. You probably cannot. For the first time in history, many racial slurs are beginning to have the kind of psychological impact that other profane terms have.

There's been some fascinating research on this topic. If you're interested, I'd recommend checking out a book called Holy Shit! A Brief History of Swearing by Melissa Mohr.

There is actually a book called Holy Sh*t by Melissa Mohr which details the history of swearing. If you're interested in this, I highly recommend it.

Essentially, the word cunt wasn't really considered to be bad until more recently. As humans began to have private spaces to do things like pee, poop, and have sex, those things and the parts they used began to be more and more taboo.