We found 8 Reddit comments about HORI Real Arcade Pro 4 Kai (White) for PlayStation 4, PlayStation 3, and PC. Here are the top ones, ranked by their Reddit score. 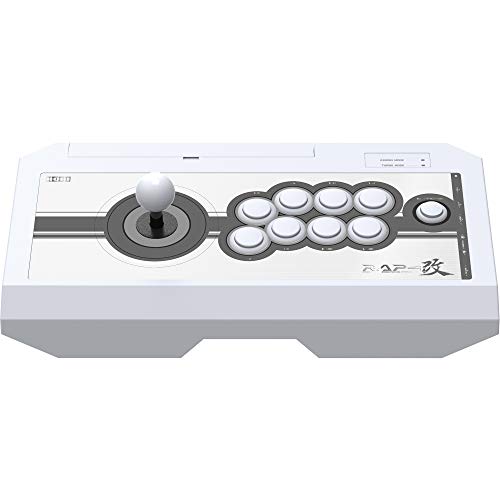 Officially Licensed by SonyCompatible with PS4, PS3, and PC (XInput)Uses HORI original HAYABUSA stick lever and new HAYABUSA buttonsRedesigned chassis and increased space between and below stick and buttonsAvailable in new colors!
Check price on Amazon

if you find the idea of playing on arcade stick appealing or think it'd be more fun, rather than just doing it because you think it'll make you better or whatever, then I do think they're worth looking into. to me, they feel much more natural for fighting games, but generally it's just a preference and there's nothing about them that will inherently make you a better player, albeit I think it's fair to say there are advantages to playing on stick and even some disadvantages.

kind of a contradiction when it comes to arcade sticks. as with most things, you get what you pay for and an cheaper arcade stick will not have great parts.

some of the more notable cheaper sticks I can think of are the Qanba Drone and the Qanba Q1. The problem with these cheaper sticks is almost always going to be the quality of the buttons and joystick. I'd say the golden standard for arcade parts is Sanwa Denshi and typically a stick that comes with Sanwa nowadays is closer to the $200 mark. With the Drone in particular, the main criticisms I hear are loud buttons and cheap feeling joystick and annoying hang-ups with replacing the joystick. To me, these are terrible cons, in particular the joystick and problems that come with replacing it. The Q1 seems more mod friendly but you're still left with stock parts, which are never really fantastic.

The next step up would be something like the Hori RAP 4 Kai at $150. Hori started putting their own HAYABUSA joystick/buttons in their sticks a while ago and, from what I've heard, they're quality parts. I personally have an older Hori RAP VX Sa Kai but it has Sanwa parts so I can't personally comment on the quality of HAYABUSA.

There are cheaper/more expensive options than all of these of course but I think these are all decent options for beginners, though I think I'd have trouble wholeheartedly recommending a Drone to anyone, based off what I've heard at least. I think the Kai is a good balance between not too expensive and quality, imo.

Also, don't rule out something like ebay or craigslist. You might be able to find a good deal on a TE2 or something nice on there.

I recommend a totally different direction and getting the HORI HRAP4 Kai. Its got great parts included. Its easily modded. I faced the same choices for my first stick. I love my Kai. Check Offerup or Facebook Marketplace in your area for good used ones as well. I've seen more than a few good examples in my area many times going for 100-120 USD. Otherwise buy it new from Amazon. https://www.amazon.com/HORI-Real-Arcade-White-PlayStation-4/dp/B01M3ULCQY/ref=sr_1_2?crid=1R9WSILKMDTQN&amp;amp;keywords=hori+real+arcade+pro+4+kai&amp;amp;qid=1549962549&amp;amp;s=gateway&amp;amp;sprefix=hori+real+ar%2Caps%2C211&amp;amp;sr=8-2

Thanks for your input. I did some searching around on Amazon the past few weeks and, though pretty pricey, I hear a ton of good things about these. I'm having a little bit of sticker shock because I would need to buy two of these (two players, obviously) but it keeps coming up in recommendations for people who want a really good arcade stick. I'm just a little uneasy about spending what is essentially 300 dollars on controllers.

I've looked some hori sticks and I'm not sure are they customizable. I might buy square restrictor with it if it's possible.
https://www.amazon.com/HORI-Real-Arcade-White-PlayStation-4/dp/B01M3ULCQY/ref=sr_1_7?s=videogames&amp;amp;ie=UTF8&amp;amp;qid=1506097298&amp;amp;sr=1-7&amp;amp;keywords=fightstick&amp;amp;th=1

at that point then yes you totally can go for the stick. its just if you really like the way your wrists and hands are holding a controller, it may take some time to adjust your hands to get used to a stick, more so than getting used to a separate controller.

and money wise, a hori pad is like $40 i think? compared to some sticks which can be upwards of $100

Id recommend going for an Hori 4 Kai , they are good 1st sticks and wont ruin you ...completely at least.