We found 5 Reddit comments about HORI Real Arcade Pro Hayabusa Tekken 7 Edition Fight Stick for Xbox One Officially Licensed by Microsoft - Xbox One. Here are the top ones, ranked by their Reddit score. 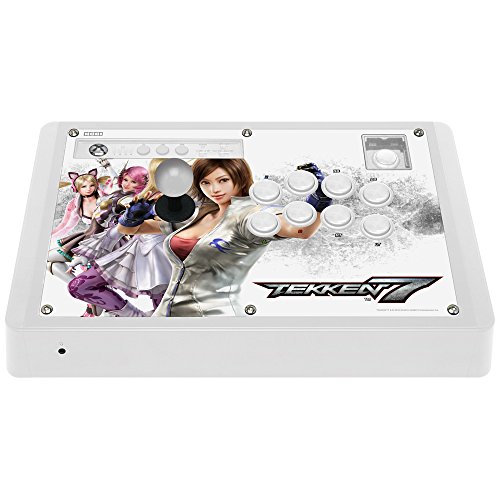 Awesome thanks for all the responds guys!
im probably going to try it on PC and see how it plays maybe end up getting it for both.
looking into getting that new Tekken 7 Hori fightstick. i really like the black one thats meant for PS4 but since dont have a PS4 im kinda stuck getting the white one unless i only play on PC or just get a brooks super converter. i also noticed that the PS4 tekken fightstick has a few more features like Turbo that the xbox one version does not.

So when Tekken 7 came out, I super enjoyed it and purchased the Hori Tekken 7 fight stick (https://www.amazon.com/Arcade-Hayabusa-Tekken-Officially-Licensed-Microsoft/dp/B019ZDL970), as I similarly had thought that it would improve my inputs, and frankly I just thought it looked cool (all the streamers I watched at that point had them). The thing I wished I had considered more at the time, is that the transition from playing from a pad to playing on a fight stick, is a much bigger transition than I had expected, and a significant time commitment. Unlike other places in the world where there is still an active arcade scene (where people play more in an arcade than at home, so they want to help replicate the arcade experience at home with a fight stick), here in the US, the arcade scene died out a long time ago, so in general, most people have played with a controller almost their entire lives. So if you do purchase a fight stick, during the learning phase, you will take a big step back from where you are now, just as you won't be able to rely on your lifetime of controller experience and will literally need to start learning to play again from step one. It's not so much like changing from an xbox controller to a playstation controller, it's more similar to moving from a controller to a keyboard and mouse. So while I don't regret my purchase, and have declined offers from friends to buy it, after about a 100 hours of using a fight stick, I went back to a controller. Of course, this is just my own experience, and many, many people are able to transition much easier and end up preferring and being better with a fight stick, so your experience may be totally different from my own, but since it is a decent amount of money to buy a decent fight stick, I wanted to share my own experience to maybe help with your decision.

no its for this https://www.amazon.com/Arcade-Hayabusa-Tekken-Officially-Licensed-Microsoft/dp/B019ZDL970/ref=sr_1_7?s=videogames&amp;amp;ie=UTF8&amp;amp;qid=1499839215&amp;amp;sr=1-7&amp;amp;keywords=fightstick

I went all out and got the new Hori Tekken 7 stick. Never had a fight stick before but it seems like this is a decent choice. Supposedly the black one with the Mishima artwork will work on PC as well, I just like this one better.

Until my stick arrives I'll be using the less than ideal 360 controller.

Gotta look at it in a business sense. So the companies of course will make products for the bigger market so it will sell easier, which someone mentioned Sony have more fighting games than M$ does. That said, having those sticks exclusive doesn't mean much considering not everyone are fans of those designs. And if you are a tourney traveler and you also play on many systems, it may be in your best interest to put a Brooks all-in-one board.

The HORI RAP N is actually offered for the Xbone. It is just sold as a theme for T7. Razer may have given Sony the Panthera but Xbox always had the trusty Atrox.

You should have been around during the PS3/X360 days. Situation was hella reversed. Many of the FGs ran better on the X360 so they ran tourneys on them. Meaning you needed your sticks to be compatible for that. Or in some cases people just used a Brooks board anyway.