Reddit reviews Horse Soldiers: The Extraordinary Story of a Band of US Soldiers Who Rode to Victory in Afghanistan

We found 9 Reddit comments about Horse Soldiers: The Extraordinary Story of a Band of US Soldiers Who Rode to Victory in Afghanistan. Here are the top ones, ranked by their Reddit score. 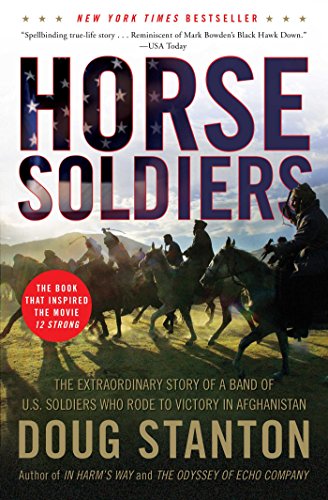 9 Reddit comments about Horse Soldiers: The Extraordinary Story of a Band of US Soldiers Who Rode to Victory in Afghanistan:

When the US began operating in Afghanistan in late 2001, Special Forces operators used horses to get around. A few pictures of 'em. I've read a few accounts of soldiers going into engagement on horseback there, but not an actual cavalry charge in formation to break the enemy formation.

Horse Soldiers apparently gives a good account of them, but I haven't read it.

&gt; not good for a modern deplorable military unit.

Direct Action - Written by a former Ranger/SF guy, this is the first in a set of (so far) 3 books featuring Deckard as the main character. Deckard is a former SF and CIA SAD guy who ends up getting contracted by a shady cabal to form a PMC for them to use in their attempt to bring about a NWO. He says "fuck that." This is honestly some of the best in the genre of military fiction. Written by a dude who has been there and done that, it's well written and believable enough, and the action...gritty, hardcore, doorkicking, operating action. It does not stop once it starts, and neither do the sequels, Target Deck and Direct Action. They're a blast to read and I can't recommend them enough.

Task Force Desperate - America's dollar has collapsed. The military is incredibly underfunded and no longer has the ability to project power. This all comes to a head when an American military base in Djibouti is attacked and taken over. With the US no longer able to respond to events such as these, Jeff's PMC, Praetorians, are contracted to handle the situation. The guy that wrote it is a former Recon Marine, so similar to Jack Murphy, he's been there, done that, and it shows. If you want hardcore action, this is another solid book for you. The plot is a bit out there, but hey, fuck it, it's fun.

Moving away from fiction...

Level Zero Heroes - Written by one of the first MARSOC dudes that went into Afghanistan when MARSOC was first stood up. He's his MSOC's forward air controller, and it's just a pretty cool and interesting look into the special operations world from a new (at the time) SOF unit.

Horse Soldiers - About the first ODA that went into Afghanistan within weeks of 9/11. They worked really closely with CIA SAD, and it's an incredibly interesting write up on what these guys managed to do in incredibly austere conditions. They rolled around the country on horseback. That's bad ass.

First In - Similar to Horse Soldiers, but written by one of the CIA paramilitary officers that coordinated with the Northern Alliance and the SF ODAs when they first came in country. A bit dry, but if you're interested in this sort of thing, it's one of the best (and only, from its perspective) accounts of the early parts of the Global War On Terror.

Now for some non military stuff.

Dune - The best sci-fi novel ever written, bar none. It has political intrigue, an oppressed people against an overwhelmingly larger force, oh, and giant sandworms. It's hard to describe just how rich the world of Dune is in a simple paragraph, so I won't even try. If you're into sci-fi and you haven't read Dune, you owe it to yourself. You're in for a treat.

The Road - The bleakest thing I've ever read. It takes place after some type of apocalyptic event in the US (which is never detailed), and is the story of a father and his young son attempting to survive in the wasteland amongst cannibals that keep their "livestock," chained in a basement, roving bands of marauders, and other horrors. It's written in an incredibly minimalist style which adds to the tone and atmosphere so much. If you want something heavy, this is your book.

I'll probably add more but here are my recommendations for now.

Horse Soldiers, fantastic book about the first ODA's in Afghanistan.

If you can get a hold of it, read "Horse Soldiers" which is the story of these guys and their efforts in Northern Afghanistan. It is really gripping and tells the story of how the war on Terror started very well.

Not a usual recommendation, but Billy Waugh will provide you with the unconventional for sure, which I think every conventional officer should be fairly knowledgeable in convetional and asymmetrical manners of warfare. There isn't necessarily too much truly in-depth, but the nature of his work during the early recent era's are introspective.

The main trilogy I think every officer should read is a trilogy that has a heavy emphasis on the incompetency of leadership during World War 2, known as the 'Liberation Trilogy', by Rick Atkinson:
https://www.amazon.com/Liberation-Trilogy-Boxed-Set/dp/1627790594

And here is the one on Billy Waugh and the gang:
https://www.amazon.com/Horse-Soldiers-Extraordinary-Victory-Afghanistan/dp/1416580522


Seriously, there are so many viewpoints and critiques of the GWOT and implications of such an effort and progressing, globalizing world that Google really is your friend.

To give you only bullet points would be unfair. But I will toss a few good book links below.