Reddit reviews How to Be Yourself: Quiet Your Inner Critic and Rise Above Social Anxiety

We found 2 Reddit comments about How to Be Yourself: Quiet Your Inner Critic and Rise Above Social Anxiety. Here are the top ones, ranked by their Reddit score. 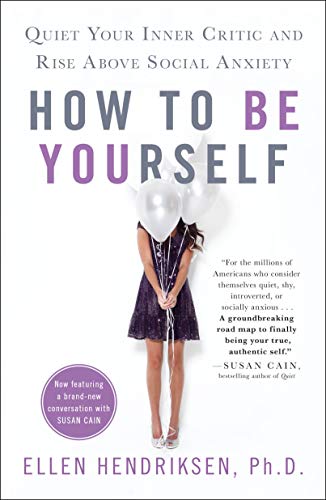 2 Reddit comments about How to Be Yourself: Quiet Your Inner Critic and Rise Above Social Anxiety:

You sound pretty normal to me. Schizophrenia goes beyond all that. I would describe myself similar to how you described yourself and I would bet a large majority of people on Reddit would if they were being honest. But, most are not. Something I concluded from my wife and several other very well-adjusted people out in the real world who don't spend a lot of time online is that people online have problems. Like, serious problems. But, of course, they don't admit that to anyone because they're always telling other people online how pathetic everyone else is. They make snap judgements about people they don't know and put them down to feel better about themselves, apparently. So many of them will argue endlessly or downvote over nothing; this is stuff people who never post online wouldn't even think is worth bothering with at all. They think it's nerdy and absurd. They're right. Onliners are some of the most miserable people on the planet.

So, my point is, if you are withheld in everyday life, but talk to people a lot online, you're going to have a skewed idea of reality. Most people are pretty goofy and just want to be normal, so they want their friends to be normal because they don't know how to react to abnormal. Why do you think it's so common to sit around and talk about sports? It's about the easiest thing to do so long as you've put the minimal effort required to have this "normal" everyday interaction with your fellow humans. You have to know basic bullshit about teams and players and scores so you can sit around and have meaningless conversations about who will win and how good or bad the teams/players/seasons are. Think about how fucking trivial that is. If it doesn't appeal to you at all because it's basically meaningless, then that's why you feel like an alien pretending to be human. But, do it enough and you'll stop filling your head full of ruminating thoughts that make you feel "weird." Your head will be full of "normal" stuff like what a great quarterback so-and-so is. And you'll know you're normal because you can have the same conversation with your barber, butcher, or bartender and everyone will agree this is a normal thing to be fixated on for some reason. Sports!

Something I learned recently is rumination leads both to the artistic temperament and to anxiety and depression. If you're wired to be the ruminating type who analyzes stuff, you're wired to have these kinds of feelings. They're the same kinds of feelings that could cause you to write a great screenplay or novel or become a successful illustrator, designer, etc. But, don't doubt yourself too much in relation to other people. They're just interested in different things than you are. David Bowie felt like an alien. Most comedians and musicians felt like weirdo outsiders. Plenty of famous actors, too.

But, if you continue to make an issue of how you feel, it will get worse and maybe you will have a schizophrenic break (probably not, but maybe), so don't do that. It won't make you feel good to fixate on how different you feel unless you're an egomaniac who prides himself on that. In which case, you'd make a great hoity toity art snob type! I think it's common for people to become schizophrenic by their 30s but not too common after their 30s. I don't know all the details, but I'm pretty sure it's related to stress, genetics play some role, and usually the person was put in a double-bind during the developmental stage where he was damned if he did and damned if he didn't by oppressive parents. Schizophrenia is pretty common among Jehovah's Witnesses.

I'm not a psychiatrist and I'm not trying to play one. I'm just sharing what I've learned from living through the situation. My friend and I were very similar personality-wise, but I left and went on to college and he stayed around and felt stuck. He had certain fears he didn't conquer and he finally snapped. He also had parents that put in him a double-bind and he came from a Jehovah's Witness household.

By the way, even though 90% of self-help books are useless garbage, I've heard really good things about this book: https://www.amazon.com/How-Be-Yourself-Critic-Anxiety-ebook/dp/B074ZPCH67/ref=sr_1_3?s=books&amp;amp;ie=UTF8&amp;amp;qid=1543598808&amp;amp;sr=1-3&amp;amp;keywords=how+to+be+yourself ...so much so that I took it out of the library recently and started reading it. It seems quite good right away, but I just barely started it.

I really strongly recommend How To Be Yourself -- it's CBT-based and all about social anxiety. For instance, I learned from reading it that those two kinds of social anxiety feelings are anticipatory processing (before) and post-event processing (after) and the book talks in depth about dealing with each of them.