We found 23 Reddit comments about IceFox S41 4x Nichia 219B/ XP-G2 A6 1600LM Mini LED Flashlight. Here are the top ones, ranked by their Reddit score. 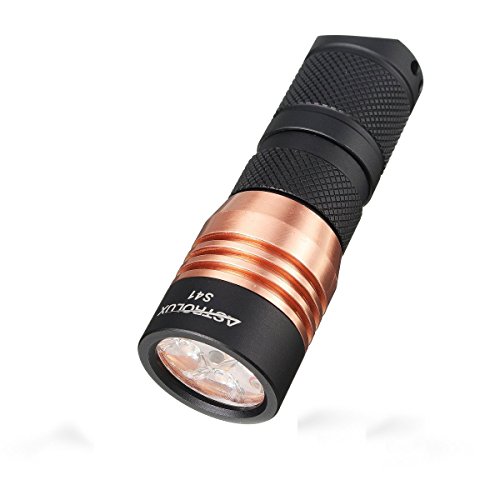 There's another hiccup though: Zebralight's site shows that it's unavailable for order right now. It's a new model, and production is still ramping up. I'm told they may be trying to avoid a backlog of preorders, but it's hard to estimate when it will be available.

Astrolux S41 - also get the 18650 battery tube as the stock configuration takes 18350 batteries with about 1/4 the capacity.

This looks like a pretty nice light, but it's had some QC issues. This, I believe is the older version with less severe issues. If you find one made of stuff more exotic than copper and black-anodized aluminum, avoid it for now. The driver is also considerably less efficient than Zebralight's on lower modes, brightness decreases as the battery drains and there's no thermal sensor to keep it from overheating.

The good news is it still has a ~5000K color temperature and over 90 (typically 93) CRI. Here's a review with measurements.

In either case, Sanyo NCR18650GA batteries are a good choice and reasonably priced. The Nitecore F1 charger is very compact and also acts as a USB powerbank. If you want two slots and a display, the Nitecore D2 is a good deal.

Take a look at Astrolux S41. It is $30 on Amazon. XTAR MC1 charger is good quality and $8 on Amazon. I would not buy batteries from Amazon though, get a couple IMR 18350 cells from Mtn Electronics for about $12 shipped making this light well under your budget.

Things you might not like are that it is longer (3.2") than you want and it has a normal reverse clicky tail switch. The light does come with deep carry clip and lanyard. The real draw of this one is the output, 1400+ lumen quad emitter which at this price is hard or impossible to find elsewhere. With a little practice turbo and strobe are readily accessible or the light can be configured to turn on directly into these modes using mode memory.

Regarding using it as an impact tool no light in this price range will be designed to withstand heavy abuse but it does come in a stainless steel variety which would hold up better than aluminum. The steel version is S41S and is often available at Banggood for $35 but currently is $42, still barely within budget if you skip the spare battery. As far as best you can get in this price range, I think this is it.

Thanks for the giveaway!

Astrolux S41, obviously with the Nichia.

https://www.amazon.com/gp/product/B01LX8MJU0/ref=ox_sc_act_title_1?smid=A13BRSR0TJMNLN&amp;amp;psc=1
Thanks for the sweet giveaway. Good luck everyone!!

Mad respect for doing this and thanks for the shoutout :)

This is awesome, thank you for doing this!

Astrolux S41, obviously with the Nichia.

Thanks for doing this! I'd go with the Astrolux S41: https://www.amazon.com/Astrolux-Flashlight-Flashlights-Travelling-Batteries/dp/B01LX8MJU0/ref=redir_mobile_desktop?_encoding=UTF8&amp;amp;psc=1&amp;amp;ref_=ox_sc_saved_image_4&amp;amp;smid=A13BRSR0TJMNLN

Yes please and thank you. https://www.amazon.com/Astrolux-Flashlight-Flashlights-Travelling-Batteries/dp/B01LX8MJU0/

Not familiar with this brand, but this one looks interesting.

With the Nichias. This is a great giveaway idea!