We found 1 Reddit comments about Influencing Attitudes and Changing Behavior. Here are the top ones, ranked by their Reddit score. 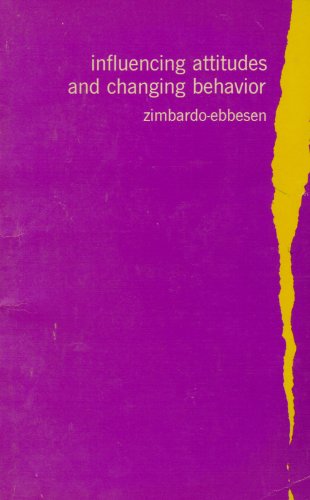 Reuse of Enviroments
I think the key difference lies in designer intent. Are the enviroments being reused to increase playtime, or to help drive the narrative? Reusing enviroments is a really (relatively) cheap and effective way to show the passage of time &amp; the influence the narrative has had on previous enviroments. The player's familiarity helps draw emphasise to the changes made.

If I were to pick out one game that does this really well it'd be the original two Doom games. As a rough example, imagine the player enters a square room. The corners of the room are blocked off, so the room forms a sort of + shape. The player clears this area of baddies, but as they cross the room the walls blocking off the four corners lower revealing more monsters. Its a simple 'gotcha' design used to great affect during the earlier 'tutorial' levels, while the player is still learning the game. However after a while this design is altered. Imagine the same trap set up, this time though the player crosses the room and nothing happens. They exit and carry on till they are given reason to return - perhaps a key was later in the level. The trigger was hidden elsewhere in the level, so when the player returns the monsters have already been revealed and are waiting for them. The player isn't aware of this and expects an empty room.

Seligman
I studied psychology for 4 years. So I'm pretty well read up on a lot of the main theories &amp; approaches. Its turned into a surprisingly useful tool when designing enviroments or narratives. I actually studies under one of Zimbardo's students and was surprised to find he is still quite active on the lecture circuit, even today.

If you're looking for more reading among similar lines I would strongly suggest taking a look at Nature via Nurther, Influencing Attitudes... and The Psychology of Attitude Change. I would also take a look at the theories behind Cognitive Behavioural Therapy. as there is a lot of very interesting work in that field. I would strongly suggest looking for an introduction to the cognitive &amp; humanist approaches to psychology. They're a bit more modern than conditioning which has been shown to be incapable of predicting human behaviour.

I will mention that I'm by no means an expert of Seligman. I know of this research enough to know that I don't support it, but I've not read too far in that direction. I was mostly aimed in the psychobiological &amp; cognitive directions. The main take away: if it works for you, keep at it until something better comes along.

Moonpath
Moving back to moonpath, I feel the questions you've asked are useful during the concept/pre-design phase but are not really useful once you've entered the sprint cycle (I'll be covering that in tomorrow's article).