We found 16 Reddit comments about Jacked: The Outlaw Story of Grand Theft Auto. Here are the top ones, ranked by their Reddit score. 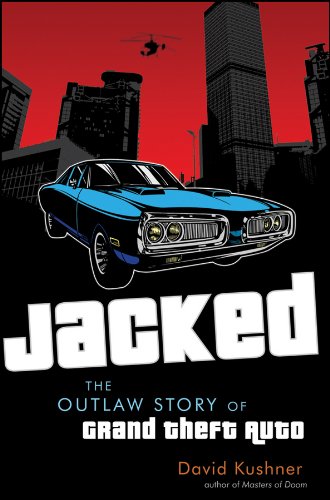 Looking at how much time and money they put into building their cities throughout the years (this book covers it in detail, but trust me it's a lot) I doubt they'd do it for a $20 expansion.

There are many game series and developers that I've fallen in love with, that I thought would always be on my instant-buy list. Most of those have either fallen in quality or my tastes have changed, but Rockstar is still a developer that I'll snatch up every new game.

GTA 1 and 2 I remember playing hours of on the PC. They were a blast to play, but were fucking hard! So mostly I spent time just causing chaos.

What I remember most in GTA 2 is that I'd drive around, find a bunch of big vehicles like buses and cluster them together. Then get out and blow one up, causing a nice chain reaction. I don't think I ever got very far in either of the games due to the difficulty.

So when I first saw the commercials for GTA 3 I was excited. I remember seeing the cars driving around to a classical music sound track, but not really expecting it to be as revolutionary as it was. I had played the Driver game on PS1, and figured it was going to be very similar.

Boy was I wrong. GTA 3 amazed me at just how open a video game world could be. I could clearly see why it was called a sandbox game. Sure, the missions were there, and I played through them, but the open world with all that you could see and do was something new to me.

I clearly remember messing around between missions, hitting jumps, blowing cars up, jumping and jumping until I got over a short wall, or grabbing a large truck and jumping up onto it in order to reach an otherwise unreachable area.

Everything about it at the time was amazing: the graphics, the game world, the driving mechanics, the radio stations with their wacky commercials and talk radio station. Even the mission structure, where you had some choice over which story line you wanted to contiue next. Or the ability to just ignore the missions for a while and just fuck around.

I've bought GTA 3 on pretty much every platform imaginable, and I'm now finishing it once again on Android. Even though it's aged the poorest of the three PS2-era games, with it's lack of motorcycles, true flying vehicles (sorry Dodo) and some of the other advances made in the sequels, it's still enjoyable for me to jump into and explore.

By the way, I HIGHLY recommend this book to any fellow GTA nuts:

It goes through the time period of Rockstar when they were still DMA Designs, up through GTA IV. It also includes some of the controversy the series has gone through, including good ol' Jack Thompson. Everyone seems to praise the author's other book "Masters of Doom" about id software, but I found Jacked to be much more interesting.

You might like to read Jacked: The Outlaw Story of GTA as it talks about Rockstar's struggle with content development and the censorship battle they faced. And it's a pretty fun book. :-)

No, because a lot of people have said so ranging from countless writers, critics, and developers. Did you even read the story below the Sessler sound bite? There's nothing to prove about it being satire. If you're offended by Grand Theft Auto, which you clearly are, you should be. It's intentional.

A much better source of information will be Jacked: The Outlaw Story of Grand Theft Auto, by the author of Masters of Doom: How Two Guys Created an Empire and Transformed Pop Culture, which comes out next month

I'm surprised nobody mentioned the book, Jacked. It's by the same guy who wrote Master's of Doom. It's a great book and mainly covers the development of GTA up to GTA 4, but also gives a glimpse into the rise of Rockstar. I highly recommend reading it.

There was a really great book that chronicles all the stuff that led up to the whole thing. It's also a great book about the history of GTA in general. Recommended read, it's called Jacked.
http://www.amazon.com/Jacked-Outlaw-Story-Grand-Theft/dp/0470936371

There's an interesting book about the GTA series called "Jacked: The Outlaw Story of Grand Theft Auto," that goes into some of the history of the series (amazon link: http://www.amazon.com/Jacked-Outlaw-Story-Grand-Theft/dp/0470936371). The author goes into the development of the first game at DMA and how one of the original programmers was adamant about following traffic laws, etc. while playing the game, and was opposed to the idea of the game existing as a promotion of crime for its own sake.

Using that as a jumping off point, I tried a play through that involved following all traffic laws (I didn't pay much attention to karma in general, per se). Unfortunately, you end up failing a bunch of missions by doing so. So, while some moral choices are left up to the player, there's no doubt that you're supposed to at least drive around like a maniac if you want to complete the game.

Jacked: The Outlaw Story of GTA

I remember a redditor telling me about it, talks a lot about the media reaction to the game.

Thanks getting this and decided to get this as well.

I never heard that story. But this book talks a lot about the Houser's not being happy with the cast of VC, particularly Reynolds.

If you ever get a chance to, I suggest reading Jacked: The Outlaw Story of Grand Theft Auto, in the book they talk about how they use marketing tactics from Def Jam Records and put stickers around all around New York to get the logo and name known.

&gt; I'd LOVE for someone to write a book about all the dirt from inside that place.

It's your lucky day!

I read it a couple years ago so I don't remember the exact details, but it was a good read.

Well, this book explains a lot.

EDIT: Before the rush to downvote, remember that you can be constructively critical of a beloved company. Be it Apple or Valve or Rockstar.