We found 3 Reddit comments about Killer Show: The Station Nightclub Fire, America's Deadliest Rock Concert. Here are the top ones, ranked by their Reddit score. 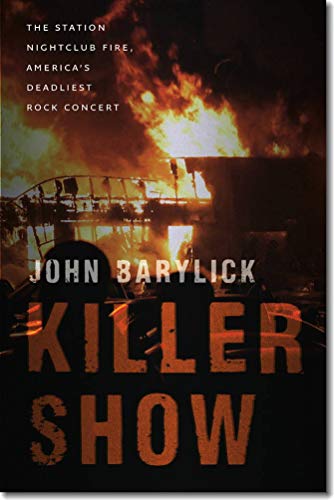 It was actually 2 different types of foam padding glued one on top of the other. Polyurethane foam (catches fire VERY quickly) glued onto closed-cell polyethylene foam (denser, but once it does catch fire, it has a heat release rate 7x that of PU). Basically, the people who didn't make it outside of that club within 90 seconds, died. Except for 1 survivor who was wedged in a corner underneath the pile of people trying to get out of the front door. I highly recommend reading "Killer Show: The Station Nightclub Fire, America's Deadliest Rock Concert" by John Barylick. It's an incredibly detailed and tragic account of the fire, the victims, the survivors and the investigation afterwards.

Joe Cristina, there with his friend Matt Pickett, took this shot. Behind Jeff, the flaming stage is visible. To Jeff's right and down aways was the log jam of people trying to escape through the front door. To his left was the stage door. Some reports say he never left; others that he got out and went back for his girlfriend, Becky.... Another article on Jeff. However, given the cigarette, drink, and coat he's holding, it appears he never left. According to the book Killer Show, only seconds passed after this photo before the smoke/heat layer descended far enough to make escape unlikely. Joe escaped through an atrium window.

All about Matt - written by his fiance. Matt had an audio recorder in his pocket. A year later, his family found it and the FBI restored it. Screams, pleading, and cries of dozens of patrons are followed by the simple sound of the raging fire. I don't know if the tape is available anywhere.

That guy survived. The man who saved him rescued another person in a later incident. Car accident or fire. Can't remember.

Written by one of the lawyers who represented victims of the fire. Great read, goes into extreme detail about many of those who were involved.