We found 1 Reddit comments about Lonely Planet Scotland. Here are the top ones, ranked by their Reddit score. 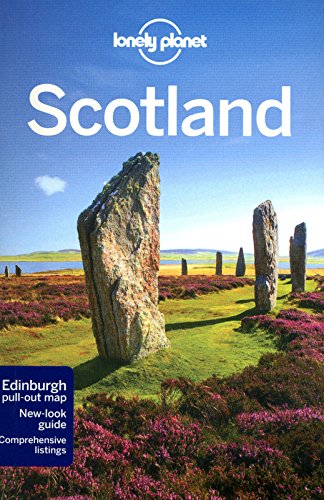 Hope this advice isn't too late for you.

If you really want to stay near the hotel, check out http://southsidehappenings.blogspot.co.uk/ as they tend to highlight interesting things happening in the area.

However, I'd recommend getting in a cab from the Sherbrooke (ask the front desk to book you one) and getting the hell out of Pollokshields and into the city centre. Ask to go to a central point like The Buchanan Galleries (a shopping mall at the north end of Buchanan Street) or George Square. Mosey around. Use your guidebook to find stuff that interests you.

Alternately, you can use the Subway (our underground railway system, and no, it's not called the Tube or the Clockwork Orange) - http://www.spt.co.uk/subway/ - to go further afield. Walk out of the hotel on to Sherbrooke Avenue, go right (east) onto Nithsdale Road, walking away from the motorway, then after a bit of walking turn left (north) onto Shields Road, then eventually you'll reach the end of Shields Road and you'll have the motorway in front of you; turn right and you'll see Shields Road subway station in front of you (the low brown coloured brick building on the left hand side of the street). I'd still recommend the cab into the city centre and you can jump on the subway from there (from Buchanan Street station at the north end of Buchanan Street (just down from The Buchanan Galleries), or from St. Enoch's station at the south end (in St. Enoch's Square).

If you're politely accosted by someone trying to sell you "The Big Issue", don't panic; it's a street newspaper (actually more like a magazine) distributed by homeless people or people suffering from issues that can lead to homelessness. They are employed by The Big Issue Foundation and have to operate under a strict code of conduct. If you don't want to buy a copy, feel free to politely say no thanks, but if you're interested, it's £2.50, half of which goes directly to the street seller.

(However, if a random person comes up to you on the street asking you for "any spare change?", politely say "no, I don't, sorry" and walk on :)

The best local newspaper to buy is the Evening Times; first editions usually appear around lunchtime, evening editions around 4-5pm. You can get a copy from any newsagent shop or from street sellers on the major city centre streets who usually stand beside small mobile newsstands, bellowing "EEEEEEEEEVNIN TIIIIIIIMES!" at the top of their lungs.

The football (or "soccer", ugh, how I hate that word!) season kicks off in Scotland this weekend, but only one team is playing in Glasgow the weekend you're there (Partick Thistle who play in Firhill Park on the north side of the city; St. Mirren from the west side are playing away at Dundee, Rangers on the south side are not playing that weekend, and Celtic on the east side will be over in Philadelphia playing a friendly against Real Madrid as part of the Herbalife World Football Challenge 2012 tournament), so there shouldn't be a) hordes of football fans out for a pint after the match or b) any trouble.

Then, when you're ready to go back, hail one of these guys - http://www.glasgowtaxis.co.uk/ - to get you back to the Sherbrooke; basically any black hackney-style cab. Taxis that are regular cars with a taxi on top are "private cabs" and won't stop when you hail them - they can only be booked by calling the cab company. Black hackneys with the yellow light on the roof switched on can be hailed - if the light's off, let it go by, they won't stop. Pay the fare when you reach your destination before you get out the cab. If you want to tip, round the fare up to the nearest pound.

If you can, use Google Maps and Street View to get your bearings before hand. Note that Street View imagery for Glasgow is unfortunately about 4 years out of date, but it's still very useful.

Have a nice time, be prepared for changeable weather, and enjoy yourself! Glasgow is a great city :)