We found 1 Reddit comments about Magnificat - English ed. Here are the top ones, ranked by their Reddit score. 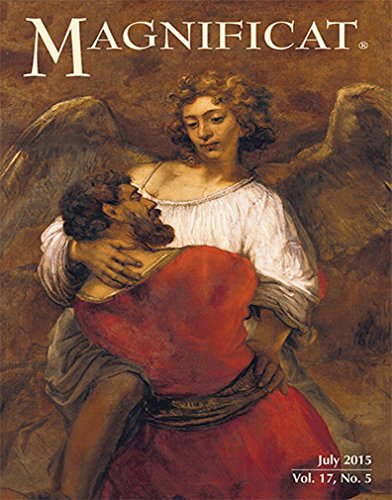 I recommend Fr. Alban Butler's Lives of the Saints, which is also available for free from project Gutenberg, in ebook form, as a way to learn more about the saints.

Magnificat and (I assume) other daily missals have the lives of saints.

It's basically the loss of faithful and knowledgeable cultural Catholicism.

Even through I grew up Anglican, my mom got a book written by Maria von Trapp (of Sound of Music fame) at a tag sale when I was little, and we tried to incorporate a few of their traditions into our spiritual life as a family.

&gt;One of the old customs is to choose a patron saint for the
new year of the Church. The family meets on Saturday evening, and with
the help of the missal and a book called "The Martyrology," which lists
thousands of saints as they are celebrated throughout the year, they
choose as many new saints as there are members of the household. We
always choose them according to a special theme. One year, for instance,
we had all the different Church Fathers; another year we chose only
martyrs; then again, only saints of the new world....During the war we
chose one saint of every country at war...

&gt;The newly chosen names are handed over to the calligrapher of the family... She writes
the names of the saints in gothic lettering on little cards. Then she
writes the name of every member of the household on an individual card
and hands the two sets over to the mother...

&gt;Everybody draws a card
and puts it in his missal. This saint will be invoked every morning after
morning prayer. Everyone is supposed to look up and study the life story
of his new friend, and some time during the coming year he will tell the
family all about it. As there are so many of us, we come to know about
different saints every year. Sometimes this calls for considerable
research on the part of the unfortunate one who has drawn St. Eustachius,
for instance, or St. Bibiana. But the custom has become very dear to us,
and every year it seems as if the family circle were enlarged by all
those new brothers and sisters entering in and becoming known and loved by all.

I don't know how common these things were in families, but the fact that even the idea of really following the liturgical year in this fashion is unfathomable to a lot of people now shows us how far we've drifted in the last 60 years. (And I'm not necessarily blaming V2.)