We found 5 Reddit comments about Manias, Panics, and Crashes: A History of Financial Crises (Wiley Investment Classics). Here are the top ones, ranked by their Reddit score. 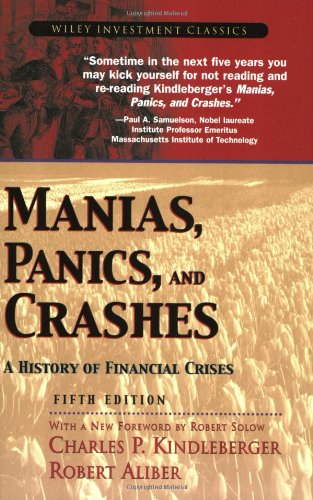 That book was published before they corrected their spreadsheet error--it applied some of the same theoretical lessons of the debt issue &amp; therefore is somewhat poisoned.

For the record, this book discusses the exact same crisis set as a R&amp;R but explicitly includes those stable countries (like Australia, NZ, CA) who haven't had financial crises, or debt-fueled growth slowing.

My point isn't to pitch for a particular book, but it seems that a certain Academic integrity requires that a 'panoramic' analysis of any issue, includes those aspects uncomfortable for or in opposition to one's own theories.

I've never seen Akerloff &amp; Schiller, for example, shy away from confronting monetarist &amp; other rebuttals. Even Larry Summers who, in other issues is pretty sleazy (namely Russia privatization &amp; his misuse of research on women) has a good deal of integrity in Academics when it comes to being wrong. And a past generation of economists, such as JM Keynes, Nikolas Kaldor, Paul Samuelson &amp; a young Milton Friedman &amp; Robert Solow regularly delighted in admitting their errors publicly. (See Kaldor &amp; Friedman's debate and also Samuleson's 'A Summing Up'--in addition, B. deLong's admitting that healthcare's positive externalities are low, Stiglitz' Mea Culpa on globalization, Summers on free trade &amp; protectionism, Bruce Bartlett on fiscal stimulus, Steve Marglin's volte-face in one direction &amp; Gintis &amp; Bowles in the opposite direction--on the opposite issue, refusal to update beliefs, we have the trenchant obstinance of inflation hawks and deficit hawks )

Here are some other panoramic sources on the same area of study as This Time is Different:

Manias, Panics &amp; Crashes is a famous textbook on the issue.

Akerlof &amp; Schiller's Animal Spirits is a smaller range but an interesting analysis

For the record, Schiller was one of the people who foresaw the housing crisis

Mark Blyth wrote a history of the concept of Austerity and its political causes &amp; consequences as well as the economic data--while polemical, and coming squarely down against austerity, is nonetheless expansive and well written.

Peter Bernholz has written a massive study, but a short book, on inflation crises in world history, expanding from Rome to the modern day that, while chained to an outdated Austrian conception of money &amp; finance, is sufficiently data rich.

Additionally, there's a neo-classical study of Trade &amp; Growth I quite enjoy, written as an implicit neo classical answer to the new economic history &amp; institutional theory. Here's a neo-malthusian perspective on the same issue.

Here is a post-Keynesian analysis of the same stuff, a neo-marxian/neo-ricardian one, an alternative B-of-P crisis theory, a geoist analysis by another person who foresaw the 2007 crisis and a radically alternative view of debt &amp; money which is theoretically interesting but empirically sparser.

Charles' Geisst is a historian with a balanced analysis of both Wall Street &amp; debt in history.

Not an economist, David Graeber has written an interest history of debt.


The point is there is a VAST, empirically &amp; theoretically rich &amp; sophisticated set of analyses, from diverse &amp; contradictory perspectives, all of which are higher standard works than either the Debt &amp; Growth paper or the This Time is Different book. I add these overkill, both for those who are interested in follow up &amp; to emphasize the diversity &amp; availability of good scholarship from other authors.

&gt; I wanted to have a in depth conversation about the pros and cons of bitcoin

It is a banking system with no ability to prevent a bank run, which means a systemic bank run will happen and it will unwind in a liquidity crisis. Practically fucking gravity if you bothered to read any financial history.

Go read a fucking book and leave us alone:

Go away until you've read all of them.

Get off the internet and do your fucking homework.

Is a good read that will give you a good financial history and lots of insight into finance, without requiring an extensive knowledge of the field. Was used in a 400 level Corporate Finance class by a Prof. who split his time between Harvard and my school.

Manias Panics and Crashes: A history of financial crises

Just as I thought. You don’t actually have any idea if it’s a good investment or not, you just assume it is because it’s gone up.