We found 1 Reddit comments about My Declaration of Independence. Here are the top ones, ranked by their Reddit score. 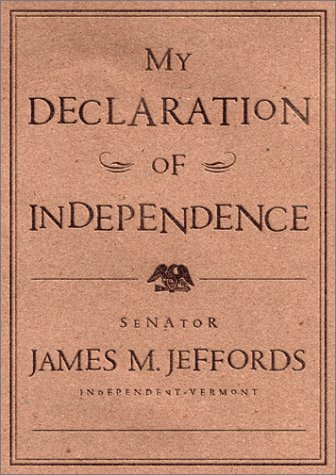 I biffed at least one fact, as /u/jw12321 pointed out. It wasn't Jeffords' seat -- Jeffords didn't retire until 2007. I should have remembered that since I remember getting his book "My Declaration of Independence" signed and that was his book about leaving the Republican party in 2001. For regional points, I went to the book signing at the Barnes &amp; Noble in DuPont Circle with a friend who was staffing for Leahy.

The Senate seat that McMullen was gunning for was Leahy's. Which my memory didn't even bother thinking of because that's fucking ludicrous given Leahy's popularity and incumbency. It made more sense to me that he'd run for an empty senate seat.

Goes to show how colossally stupid McMullen was. He horribly misjudged Vermont and Vermonters and blew over $220k of his own money on that race. And more googling turns up that he kept trying to run for office in and for Vermont... winning an uncontested GOP primary to go against Leahy again (lost; 24.7% to Leahy's 70.5%) and running for AG (lost; 33.3% to the incumbent's 57.9%).