Reddit reviews Nisa: The Life and Words of a !Kung Woman

We found 8 Reddit comments about Nisa: The Life and Words of a !Kung Woman. Here are the top ones, ranked by their Reddit score. 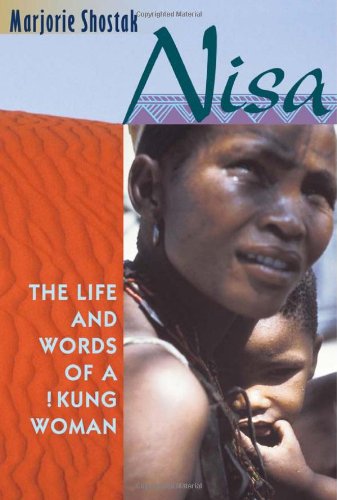 8 Reddit comments about Nisa: The Life and Words of a !Kung Woman:

Another good book that discusses this is Marjorie Shostak's book Nisa: The Life and Words of a !Kung Woman. In it Nisa describes a sexual openness. Since everyone in the family sleeps together they are exposed to sex at a young age and obviously want to learn more about it and to do this start exploring their own bodies and the bodies of their peers at a young age. It seemed as though although the adults tried to stop this, the attempts at stopping them were half-hearted as it was seen as something that all children do and must do in order to learn.

I read this book about a tribe in Botswana. It's one of the more inhospitable places on the planet, yet the researchers found that they worked short hours. Their study inspired this paper http://en.m.wikipedia.org/wiki/Original_affluent_society which is a cornerstone of modern thought on foraging tribes.

I don't rely on "paleo" evidence to determine appropriate human diets, but I do like reading it. I think the best application for it is learning about the environment that our basic systems evolved within. But the maximum you can conclude from the best paleo evidence is that whatever diet was consumed was sufficient for reproductive success under the conditions that existed at the time. The milieu of human evolution involved: a specific environment and climate (African savannah); a spectrum of foods eaten; a certain amount of exercise (lots, constantly); frequent parasitic infection and physical wounds that had to be survived; whatever microbiome we had then; food scarcity; complex cultural factors; and selection pressure to have many children and see them into adulthood, but not to live a long time.

Whatever we can conclude about diet applies only to that environment. If some of the variables change, uncertainty is introduced. A trait or strategy that was beneficial could become the opposite, or could be completely irrelevant. Thus, I prefer to look to human populations from the last 100 years. Not only do they live in an environment much more similar to mine, but we can actually gather accurate data on their dietary patterns and their health outcomes.

That said, I like this book for thoughts on dietary animal products and macronutrient ratios: The Paleoanthropology and Archaeology of Big-Game Hunting

A short paper as a reminder that all "just so stories" should be questioned, because even the most basic "paleo" hypothesis, the thrifty genotype, is contested: Evolutionary Perspectives on the Obesity Epidemic

This one is fascinating for social factors: Egalitarian Behavior and Reverse Dominance Hierarchy

And this one is just a great ethnology, especially for considering gender roles and what makes us happy: Nisa: The Life and Words of a !Kung Woman

Nisa: Life and Words of an !Kung Woman.

In Nisa: The Life and Words of a !Kung Woman anthropologist Marjorie Shostak describes that it is common for !Kung marred men and women to "take lovers" and have extramarital sex, albiet clandisnedly.

I read the book for a cultural anthropology class and was able to geturn the book afterwards for a full refund, so I no longer have it to cite page numbers, but I recall that there's an entire chapter on the subject.

Nisa (http://www.amazon.com/Nisa-Life-Words-Kung-Woman/dp/0674004329) is a biography of an African woman who grows up in a hunter gatherer society, but whose world becomes intertwined with the modern world as an adult.