We found 13 Reddit comments about Philips Avent Comfort Breast Shell Set, 2 Count. Here are the top ones, ranked by their Reddit score. 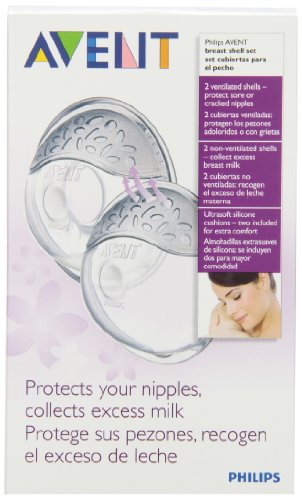 I bought a really nice diaper bag while I was pregnant. After my son was born, I used it for a whopping three weeks before tossing it in a donation bin and using a regular backpack. So much better.

The baby carrier was almost useless after he could sit up on his own. Umbrella stroller and a shopping cart cover have been much more useful. He can look around easier and play with stuff while we're out and about and prefers it.

For breastfeeding, these breast shells were soooo useful. Instead of soaking a nursing pad and my bra, I could collect the excess milk and store it for future use. 10/10 would buy again.

I assembled this cart for our living room, and I thought y'all would appreciate it. We also considered naming it the T&amp;A cart, but "boob &amp; butt" won out.

Pregnancy AND baby: Boppy pillow. When I was pregnant and had killer hemorrhoids, I sat on it. Felt so much better! Now that my baby's here, I use it to nurse. I also use it for his tummy time and also as a seat.

Baby: Vtech audio monitor. This thing is crazy sensitive, I can hear the ceiling fan in my son's room when I have it cranked up. It alleviated so much of my paranoia about him.

SwaddleMe wraps are freaking awesome. I don't use them during the day when it doesn't bother me so much if he wakes himself up (he tends to slap himself in the face while sleeping) but if I use a SwaddleMe at night I can get him to sleep for six hours straight. Their sizing is a little funky- the small/medium size is supposed to be good up to 14 lbs, but my son's between 10 and 11 lbs and is already in the large SwaddleMes. He only wore the small/mediums until he was six weeks old. C'est la vie.

Avent Breast Shells. I haven't used the vented ones in the set, but I use the non-vented (collection) ones each time I nurse. When I dump them into a bottle after I nurse, I usually have about an ounce of milk each time that I can save that would have otherwise ended up just soaking a nursing pad. They're really helping me to build up a supply of breastmilk in my freezer for when I go back to work.

That definitely an annoying problem, one thing I did when I would leak everywhere with nursing is use one of these babies https://www.amazon.com/dp/B000058DQJ/ref=cm_sw_r_awd_INFIub0AX74PK

It would regularly catch 1oz of milk and I just added it to my frozen milk stash so it didn't Goto waste!

When my nipples were dying I used the Avent silicone breast shields and they helped so much—they keep your nipples from rubbing/touching against anything and lets them heal. My routine was: a little expressed breast milk, lanolin/coconut oil (my LO doesn’t like even remnants of lanolin so I have to wash my nipples before she eats every time, not fun when they’re sensitive), then put the shields on. Recommend 100%!

Those nipple shields are for nursing specifically, there are nipple shells that will protect her nipples in her bra if they are sore, chapped etc.

You mentioned nipple shields, but have you tried Lacticups? I used these when I had sensitive nipples, even when pregnant and not lactating I liked them because my nipples could air out and didn't get all sweaty. As for the before getting dressed part, I second oragel.

I was looking at these but currently pumping both sides so this isn't a issue.

Have you tried the nipple shields that aren't for nursing? They're kind of like a plastic donut that goes around the nipple and areola with a breathable dome on top. I'm pretty sure they are designed to keep the fabric off of the nipple to help with what you are describing.

Edit: maybe not a great solution for the gym, since I'm not sure how well they would stay in place with so much movement. They might also look a little weird sticking out in a sports bra 🤷‍♀️

Also! I got some of these to catch all the leakage from one boob while princess_crow nursed from the other side: https://www.amazon.com/dp/B000058DQJ/ref=cm_sw_r_awd_Z.uwub02P2P7X

I leaked a TON and hated that it was wasted, so I'd wear one of these and then put whatever was collected in with any bottles I pumped for our freezer stash.

Pump first thing in the morning- if baby fed on the right side first, pump from the left.

If you are leaking, you can also get these shells - http://www.amazon.com/Philips-Avent-Comfort-Breast-Shell/dp/B000058DQJ which collect the leaking milk as you feed. Sometimes I have gotten 30ml in one feed from these!