We found 2 Reddit comments about Premier Gear PG-13821 Professional Grade New Alternator. Here are the top ones, ranked by their Reddit score. 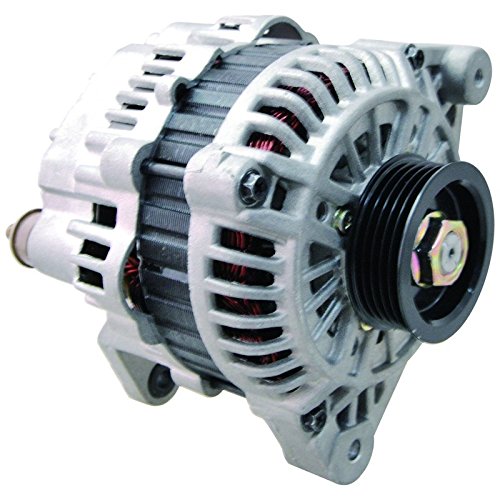 Provides protection from excessive charging or failure due to shorts in your car's wiring that can cause spikes or open circuitsConsistent performance from manufacturing processes that exceed your vehicle's original specifications for wiring, bearings and components helping to resist heat and moistureLonger life of the alternator through the use of premium brushes and other critical components that resist failure or poor performanceMitsubishi, Internally Regulated/Internal Fan125 Amp/12 Volt, Clockwise Rotation, 5-Groove Pulley
Check price on Amazon

Yes you have to take the other two belts off first. The top plug is a biatch. A tiny screw driver can help. First to dig the schmutz from around the plug, then to pry that mother up and out. Taking the front driver wheel off can help with access to that rotten piece of shit.

I replaced mine with this https://www.amazon.com/gp/product/B00KY0B2GM which fits a Quest and a Mercury Villager. More amps and that plug goes in the back of it instead of the top. You'll need a longer belt and an 8mm ground screw but it fits and works and is easier to replace next time. There's a thread in here with more detail about the swap.

To quote another redditor

"It is exactly as difficult as replacing your stock alternator. I'd give it a one scratched knuckle rating. Just watch out for the sharp edges and take your time removing the plug connector from the top of the alternator. If you have a socket set with 14, 12, 10mm and a small flat blade screwdriver for working the clip on that stupid plug you should have all the tools you need.


2. Start at the plug on top of the alternator, carefully remove that.

3. Remove the two wires from the back of the alternator.

6. Wiggle the alternator out.

7. Fish the new alternator up to where you can get one of the mounting bolts started and get it a couple threads in.

8. Start the other mounting bolt.

10. Connect the big fat hot wire, connect the ground wire. (mmm, probably should have made sure you have a ground wire bolt that fits before now)

11. Plug the pluggy plug into the plug receptacle on the back of the new alternator.

12. Put the bracket bolt back in to place.

13. Try and get the old belt to fit over the new pulley. It might go. Watch out that you have the belt under the timing pointer above the crankshaft pulley and not riding on top of it like I did.

14. If the belt won't go on you'll need a slightly longer one. To get to the alternator belt you have to remove the other two belts first. There are idler pulleys that are adjusted from the top (motor side of the radiator, first is obvious, second is a bit to passenger side hiding a bit lower) with 14mm sockets. One for each belt. Righty tighty, lefty loosey. It helps to loosen the bolt through the actual pulley a bit.

15. Once you have the belt(s) in place, push the alternator by hand away from the motor to tighten belt. Wind the adjuster bolt so that it is snug. Tighten up those mounting bolts you finger tightened earlier. You don't want a lot of play in the alternator belt but too tight is no good either. Start out snug with a little give and adjust later so that is tight enough for the belt not to squeak when the truck starts. (Stop the engine before you try and adjust it, right?).

16. Count your tools, make sure nothing is left sitting on or in the motor and hook the battery cable back up.

This is the alternator I bought https://www.amazon.com/gp/product/B00KY0B2GM/ref=oh_aui_detailpage_o02_s00?ie=UTF8&amp;amp;psc=1 although any 1999-2003 Nissan Quest or Mercury Villager alternator should work.

The plastic fixture where the big fat hot wire goes (under the red rubber cap) is a bit different than the Xterra but if you just tighten the nut on down, everything works out."