We found 18 Reddit comments about Salt Sugar Fat: How the Food Giants Hooked Us. Here are the top ones, ranked by their Reddit score. 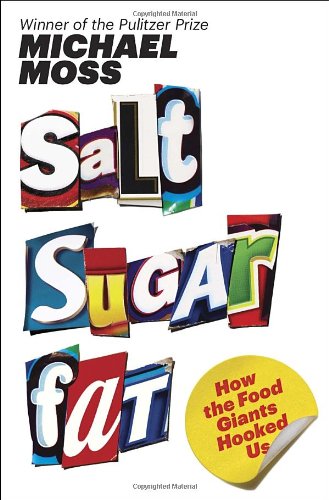 18 Reddit comments about Salt Sugar Fat: How the Food Giants Hooked Us:

There's a book out called Salt Sugar Fat which you should read, if you're interested in this stuff. It's really really horrifying.

Oh, my God. This is gold. I love the hypocrisy: raging against the pharmaceutical and weight loss industries (which is arguably a legitimate beef) while ignoring the fact that the food industry spends millions on lobbying and marketing to keep people in the dark about nutrition.

BTW, if anyone wants a couple of fascinating reads on how the food industry operates, here are two of my favorites. Both are cheap on Amazon and will do terrible things to your jimmies.

Well now, since we are sharing books, let me add mine to the pile!

This is an extremely interesting look at the food industry and the amount of thought that goes into making food (usually junk food) as addicting as possible.

Have him read this book. My hammy-in-training and super picky eater husband read it and he's down 20lbs in the past 4 months. It can be a real eye-opener for someone who is a critical thinker. I call it the fat-logic detroyer.

I wouldn't say I really buy into the idea of any kind of wholesale "obesity apologia" like I think you're referring to, but my stance is sort of middle of the road in that I no longer can accept that "personal self-control" is the only thing that has to be discussed.

Now that's not to say I don't think it's extremely important on the individual level, because it is. But a friend loaned me their copy of Salt Sugar Fat, a new book about the food industry in America, and I've only read a bit so far, but my takeaway is that the industry has a role to play in all of this and it can't be denied.

You read these stories about how much time and money food conglomerates have poured into researching how to make unhealthy foods as cheap, addictive, and unbelievably satisfying, and you can't help but feel like the people in charge of these massive companies that have the power to influence the eating habits of millions should feel compelled to act more responsibly in what they're producing. I mean, I know some people would call the comparison extreme, but it really does seem like the tobacco industry all over again to me. These companies are selling products that they know are awful for you in excess, and yet they are willingly designing them to make it so that people eat them in excess.

Bottom line, yeah, people should be looking out for themselves and nobody deserves a pass for not taking action to keep themselves healthy. But it doesn't help anyone that these multi-billion dollar companies have a vested interest in making them fat to line their own pockets.

It's a cross-promotional brought to you by the people that sell you both the soda and the drugs for the diabeetus.

In a related vein, read this book

People who make excuses are a lost cause and are cheating themselves. Not to defend those people but a couple of good reads:

Fast food and soda are designed to be addictive not nutritious.

In early human history, food wasn't always easy to come by. There would have been lots of times of feast and lots of times of famine. Those with fat stores on their bodies during famines were more likely to survive the famines than were those without fat stores. How do you get fat stores? Having a preference for energy-dense foods is a good start, and so those with preferences for fats and sugars would have been more likely to survive over the long term. They would have passed those preferences to their offspring, and that's why we have them today.

If you're interested in this topic, a great book to read is Salt, Sugar, Fat by Michael Moss.

I am currently reading Salt Sugar Fat: How the Food Giants Hooked Us.

The description of how companies spike products like Oreo cookies with sugar &amp; fats is frightening. I might need to check the book again but if I remember correctly one Oreo cookie has something like 5-6 tea spoons of sugar. I am hoping Parle-G is not in the same boat.

Now coming to your point of how to deal with this challenge: start with a plan of going through one day without Parle-G. No matter what, avoid eating a single Parle-G. If you feel cravings, have a glass of water instead. The next day will be easier. Soon, you will be a week without Parle-G and your cravings would have subsided.

I tried this with processed sugar and went 6 weeks without any processed sugar. Took a break for a day or two and am now trying to start the process all over again.

There is an entire book that says the opposite.

"Sugar Salt Fat" by Michael Moss is an excellent book to read if you're interested in the history of how food became manipulated like this (Amazon: http://www.amazon.com/Salt-Sugar-Fat-Giants-Hooked/dp/1400069807 ) though there are a few good others (and some decent documentaries). I'd also recommend you read the always excellent books, if you haven't yet, by Taubes (easiest is probably "Why We Get Fat") or watch one of his talks (there are a bunch on youtube -- http://www.youtube.com/watch?v=M6vpFV6Wkl4 is one of them) for background on the nutritional road to it.

TL;DR yes, it is a concerted effort, but a lot of the effort has to do with money/greed, market demand, politics over science, and a few bad studies done half a century or so ago.

Lots have people have said it- salt, sugar, fat. Check out the book of the same name by Michael Moss. It is pretty eye opening. Food scientists working for places like McD's manipulate the mouthfeel of food by changing the chemical structure of the fats in it and other frankenfood stuff.

It also talks about the marketing aspect where places shift focus off the health risks of their product by pumping in more salt/sugar and selling the new product as “fat-free”.

Something i do when i'm getting a craving for something i should have is chug a bottle of water real fast, that works almost all the time. it gets rid of hunger/thirst and i'm good to go. Also, listen to what your body is hungry for, if you are craving sweets, you may be lacking in carbs.

I was the same way. I spent years doing daily cardio and couldn't make a dent.

Hell, I lost a pound in the last week and I haven't been able to get to the gym for 2 weeks. And I'm stuffing my face, not starving to do it.

The key is real education, something the meat industry, dairy council, and the makers of processed foods (Salt, Sugar, Fat) doesn't want you to have.

You can absolutely have an addiction to food, especially modern processed food which is quite literally designed to addict you. Here's a quality book on the subject... it might just piss you off enough to help you resist.

I recommend avoiding sugar completely. It's got to be the worst of the three, but avoiding excess fat (especially deep fried foods) is also a good idea. At least salt doesn't have any calories. Read the nutrition labels and learn where hidden sugar is. Don't just avoid cokes and cookies, avoid ALL SUGAR as much as possible. Alcoholics don't drink a couple of beers a night and expect to stay on the wagon.

Sugar is so bad. If I simply have my usual sandwich for lunch with honey glazed turkey instead of plain over-roasted turkey, I'll finish it and find myself craving more. With the plain, I eat it and the thought of having more food doesn't even cross my mind (on the rare occasions that it does, I eat the end of the loaf of bread for an extra 50 calories of whole grain... that fills me right up).