We found 3 Reddit comments about SE Deluxe Butane Power Torch with Built-In Ignition System - MT3001. Here are the top ones, ranked by their Reddit score. 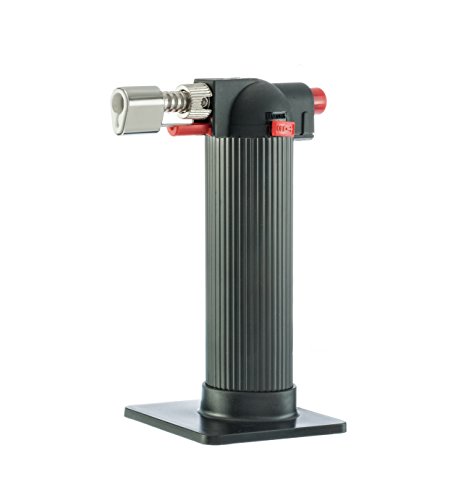 Can use torch up to 60 minutes when fully filledBuilt-in ignition systemFlame temperature up to 2,400 degrees Fahrenheit/1,315 degrees CelsiusConvenient continuous flame switch on the sideGreat for culinary artists, hobbyists, and jewelry makers
Check price on Amazon

You don't want to season a quartz nail, just heat it with a torch to clean it before you use it.

I like to always keep my banger clean. If you heat it up enough with a good-size torch, everything will burn off and it will look new again. No need to dunk in ice water or anything crazy, just torch it until it's crystal clear. Any residue will burn off and leave nothing but a fine layer of white ash. There is no reason to leave any icky buildup like a regular pipe, it will just taste bad later.

I initially bought a little butane creme-brulee torch. It sucks. Takes way too long to heat a banger. I grabbed my propane plumbing torch from the garage, and haven't looked back.

Unless you're dabbing one of those crazy-strong concentrates like distillate, you will have liquid residue left in the banger after you hit it. That's NOT the "good stuff", it's the other stuff that doesn't vaporize at THC- and terp-temps. Wipe it out with a q-tip after you take the hit, it saves you cleaning time later.

As far as getting it to the right temp, I had some trial and error. Too low, and it melts slowly and doesn't all vaporize. Too high, and it immediately turns black when you put it in the banger and tastes like crap. With metal nails, I can see getting it "red hot" and then timing the cool down, but with quartz is NEVER gets "red hot", at least with a brand-new banger. Quartz is insane... it just takes the heat with no complaints.

You could definitely learn your rig and torch as far as heating/timing, but I got tired of imprecision and bought one of these infrared thermometers. AWESOME PURCHASE, money well-spent. It only reads a high temp of 850 degrees or so, but you can monitor the cool-down, and as soon as it drops to 600F or so, you'll get a great dab. Plus, it has a built-in laser pointer! You can take a dab, and then lay on the couch and torment your cat! For only $17! But seriously, it makes for perfect dabs.

About the cleaning, I usually clean the banger right after the hit now (with the torch), after wiping with the q-tip. It's already half-hot, torching it makes it look brand-new, and who knows, maybe you'll be inspired to do another dab while it's still hot! (wash rinse repeat)

Just a quick amazon search: torch. You want the butane refillable ones. Even the cheap ones will work but don't get the tiny cigarette ones. Harbor Freight (if available in your area) has a cheap one that's around $10.

Usually dab rigs are what you want in my experience. Here is a list of what you'll need.