We found 4 Reddit comments about Sea to Summit Ultra-Sil Day Pack (Red, 20-Liter). Here are the top ones, ranked by their Reddit score. 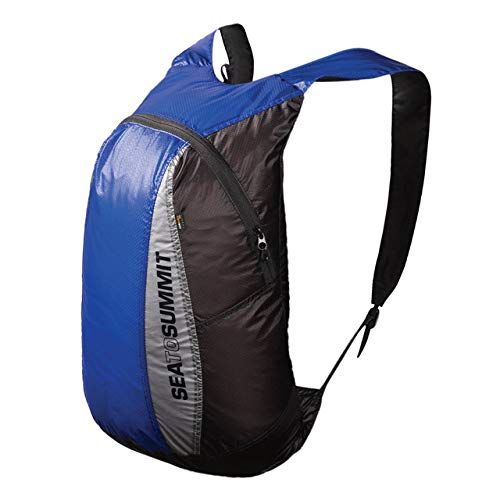 Packs down small so it easily fits in pockets, purses or luggageSimple, streamlined design making it light and low-profile (2.4 ounces/68 grams)Siliconized Cordura for strength and durabilityBar tack reinforced stitching on all stress pointsTwo-way zipper closure
Check price on Amazon

My vote would be this, or this.

I’m actually a two bagger (don’t kill me!). However that is everything I own. My main bag is a Tortuga Air. I would love to go fully one bag, but I have a CPAP that takes up a bit of room. I also have a Tom Binh Synapse 25 (I just got it, before that I was using a Timbuk2 messenger bag as my personal item). I switched to the Synapse because When I have to carry around both for a while having my heavy gear bag around my neck caused an incredibly sore neck. I needed something with real straps.

First I’ll deal with the Tortuga. I love that bag. I’ve been using it for about 1.5 years now and it looks almost the same as when I bought it. I’ve wanted to get a new bag, but I can’t justify replacing it while it’s going so well. Their are tons of in-depth reviews of the Tortuga that will go more in depth then anything I’ll do, but I’ll go over it a bit. I love that it lays completely flat when open and that it has compression straps inside the main compartment as well as the outside. The half mesh zip side of the bag is also nice for separating out smaller things if you aren’t using packing cubes. The mesh is surprisingly strong too. I put my CPAP in that mesh area for the past year and it hasn’t ripped through. Just be sure not to put anything pointy in there (like power cables). It holds as much as you really need.

The only stuff that annoys me about it is that the smaller front compartment can get squished out if you put too much stuff in the mesh compartment. This is probably not an issue for most people, but my CPAP makes the bottom part of the front pocket pretty unusable. Although I managed to put my big li-ion battery in there (20,000 mah). The “Water bottle” pocket isn’t big enough for my water bottle, however I don’t really use the bag for stuff like that. I keep a deck of cards (plastic) and my head torch (Petzl) in that pocket. Always ready for the dark or a good drinking game.

Like I said earlier I just got this a week or two ago. I got it with the padded hip belt, and the Freudian Slip. The Feudian Slip doesn’t look like something that I’ll use though. It takes up WAY too much room and I use quite a few pens and notebooks but it’s too much even for me. I’m replacing it with some Tom Binh stuff sacks. The hip belt was probably superfluous, but when I’m just going for a couple of weeks the Tortuga is overkill and I figured I could get by with the Synapse. My initial thoughts on the bag when I got it went something along the lines of, “DAAAAAAAAAAAAMN!” I’m very impressed with the overall worksmanship. That nylon is super durable feeling and the zippers are on point. I am pretty rough on bags and I think that this one will do me pretty good for quite a while.

I love the front pockets and the water bottle pocket, although I’m currently using that for my umbrella and have my water bottle (a collapsed Vapur Eclipse). The bottom holds my over-sized but very nice toiletry/first aid kit, and I have cables, pens, batteries, and eating utensils in the side pockets. The inside is one of my laptops, I’ll probably put my iPad in there too, my notebook, my cable/tech organizer, and a small packing cube of clothes. It’s probably a week worth of clothes if you pushed it. This is so that if my main bag got lost while traveling I wouldn’t be screwed.

I know that I could probably get by with just the Tortuga, but well I don’t feel like it and I like having a separate work bag. Also I don’t pack too many clothes. I pack too many cables. WHY do I fell the need to pack 3 cables of every type when I know that micro USB and thunderbolt cables are ubiquitous? I blame society, and my hatred of cables constantly breaking. Oh well, USB C is still pretty hard to find at convenience stores anyway.

Stuff I don’t like about it, hmm, I haven’t road tested it yet. I’m staying with family to help my brother with the baby once he’s born (hopefully today). However I hope to get it on the road in the next month or so, and do a weekend trip in a couple of weeks. The straps are pretty stiff, but I’ve read they break in really well after a little while. I wish the adjustment straps for the main straps had a clip to make them not bounce around when you’re walking. That’s minor and I’ll probably just rubber band them, or maybe make a clip out of something.

I also just got a Sea to Summit Ultra-Sil Day Pack which replaces the old Tortuga packable day pack I had. Don’t grab one of those by the way. Mine ended up having the bottom completely shredding along the seams after about 6-7 months. Granted I was pretty hard on it, but still. It looked like a cat had shredded it finely. No way to repair. I like having an extra bag like this for the beach, or just to grab some groceries.

I also got a Scrubba to replace my old dry bag I got in the Philippines. It allows me to wash my clothes in it very easily, and it packs down MUCH smaller than my old dry bag, although it doesn’t feel as durable. The old one was just a big bag of rubber and felt like you could throw it down a rocky hill and it would be fine. I also used it as a cooler periodically. That’s actually a pro tip for you guys. Put ice in your dry bag and some beers for the beach. BAM instant (not very effective) cooler.

Just ordered one, will be great for my commute to work, no need to carry the empty pack back after lunch!

I don't use your bag, but I carry a 12" Macbook with me everywhere abroad. My laptop goes in my day pack 99% of the time, but it fits in my reservoir sleeve as well.

My Laptop Case - Not waterproof or anything, but it protected my laptop (minus an issue with the screen) in a motorcycle accident where I broke my sternum. It doubles as a stand of sorts.