We found 7 Reddit comments about Sony NSZ-GS7 Internet Player with Google TV (2012 Model). Here are the top ones, ranked by their Reddit score. 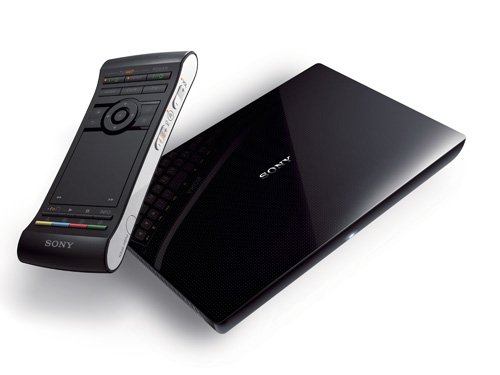 I have the Sony Media Player with Google TV

I like it so far. The remote is pretty awesome.
I think the only thing it doesn't have that Roku does is Hulu. Roku doesn't have Youtube though that Google TV obviously has.

The Roku 3 does great... except the Plex UI sucks. The Plex developers have said it's due to the way the Roku API works, and they could create custom screens, but it would be so much more work than they have time to devote to it now.

I say get a Google TV device. I have this one and aside from the overly-complicated remote (which is not hard to use, it's just a LOT of buttons), it's my preferred TV device all around. I've also in the past had Roku 1, 2, and 3, as well as Logitech Revue. The Google TV device is the most functional overall.

We have a nice surround sound system and just a normal 42 inch flatscreen. For netflix &amp; related we got this thing.

The hisense pulse is supposed to be pretty good.

I apologize, Sony - GS7. Its google TV so a TV overlay.

as it's running android, you should be able to connect your computer to it sure. not positive via what connection protocol...dlna, samba shares, etc...but something i would think.

compare the costar to what seems to be the more popular googletv product though, just in case... http://www.amazon.com/Sony-NSZ-GS7-Internet-Player-Google/dp/B008BDBPTS

You mean, This Thing; right?