We found 5 Reddit comments about Supco RCO410 Start Kit. Here are the top ones, ranked by their Reddit score. 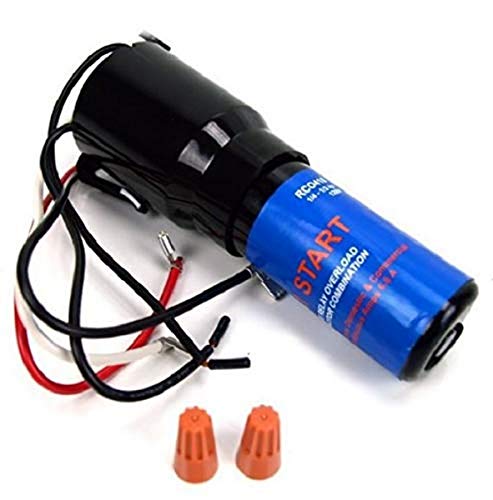 A real helluva engineer wouldn't even ask that question. I'm disappointed, but willing to offer some guidance to get you back on track.

In all likelihood, the compressor is fine, and the problem is a failed starter relay. I was able to revive a "dead" freezer I got off CL by replacing the PTC Starter Relay, like this - https://www.amazon.com/gp/product/B00WQFRT1A/ref=ppx_yo_dt_b_search_asin_title?ie=UTF8&amp;psc=1.

If the freezer doesn't run with the hard start kit, then cut your losses and replace the freezer. Hey GT ain't much for a sports fan lately, but they at least turn out people qualified for appliance repair.

I’d try replacing the starter relay and capacitor first. Regardless of it working, it’s a $12 part and worth keeping on hand for future fridges too.

tldr Ultimately I never found the part anywhere and used a universal/non-oem part. If you have the same fridge, it should work for awhile. It's probably important to get the right horsepower.

Funny story, I looked everywhere online and never found the part for sale. I did find the universal part (linked above) that looked like it would work, but a lot of people said it would eventually burn out the compressor.
It didn't seem likely but I have more free time than money these days so I decided I would try a local appliance parts store. I brought the part to be replaced down to the store, and they could not determine the model from the part so they didn't know if they had it. I was pretty sure they didn't have it anyway, so I asked if I could buy the universal part (which they had, hanging next to the cash register). The lady whistled and said ohhh nooo, you can't use that, just come back or call back with the model #, when I asked how much it would probably be she said maybe 50-60 dollars. So I went back home, got the exact model number off a tag I finally found inside the fridge, and called her back, and she confirmed they didn't have it. They were selling the universal part for not much more than the price online, so I decided to save some of my food and go buy it there. When I got there was a different lady, but she did the same ohhhh noooo you can't use that. I gave her the model # and after she couldnt find the oem part, she sighed and said "Men." immediately did a 180 and rang up the universal part.

The installation was pretty simple, there's a diagram on the bag that shows you what to hook up and it includes the caps and stuff you need. I couldn't find a place to clip it so I just duct-taped it to the inside of the fridge. It's a little noisy when it kicks on but it works and saved me a few bucks.

Try one of these. It replaces the relay, capacitor and overload.