Reddit reviews The Enemy at the Gate: Habsburgs, Ottomans, and the Battle for Europe

We found 5 Reddit comments about The Enemy at the Gate: Habsburgs, Ottomans, and the Battle for Europe. Here are the top ones, ranked by their Reddit score. 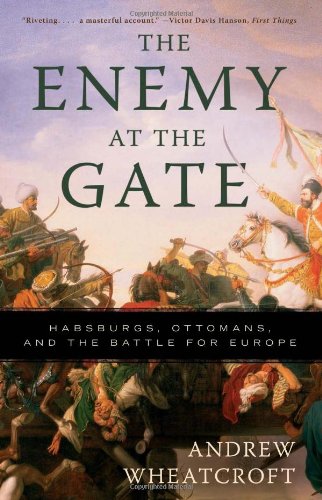 5 Reddit comments about The Enemy at the Gate: Habsburgs, Ottomans, and the Battle for Europe:

The story of the Siege of Szigetvar is astounding. Would make a great movie, or the basis for the climax of a season of something like Game of Thrones. I see OP has already posted the Wikipedia link.

For more on the Siege, I recommend Andrew Wheatcroft's ridiculously entertaining "The Enemy at the Gate," a history of the Siege of Vienna and of the general conflict between Hapsburgs and Ottomans in the late medieval-early modern period.

Before the final assault, the defenders prepared to kill their own families to prevent them falling into the hands of the Turks. The day before the assault, the Sultan died, though his death was kept secret. Then (this is from Wikipedia, but read Wheatcroft's account for a more thrilling telling):

&gt;The final battle began on 7 September, the day after Suleiman's demise. By this time, the fortress walls had been reduced to rubble by mining with explosives and wood fueled fires at the corners of the walls. In the morning an all-out attack began[4] with fusillades from small arms, "Greek fire", and a concentrated cannonade.[Note 7] Soon the castle, the last stronghold within Szigetvár, was set ablaze and cinders fell into the apartments of the count.[4]
The Ottoman army swarmed through the city, drumming and yelling. Zrinski prepared for a last charge addressing his troops:

&gt;&gt;“...Let us go out from this burning place into the open and stand up to our enemies. Who dies – he will be with God. Who dies not – his name will be honoured. I will go first, and what I do, you do. And God is my witness – I will never leave you, my brothers and knights!...

And then there was a final, explosive twist at the very end. And it's all true.

It's very cool to see the fortress reconstructed like this.

Definitely. Polish effort towards intelligence with regard to the Enigma cipher is also important through that time period. I read a lot of history and found myself fascinated with the Poles; a good place to start is Zamoyski's work although they are at least tangentially related in other histories like The Enemy at the Gate - who doesn't love Sobieski vodka? In any case, the Blyskawica ("lightning" - be sure to look up its proper pronounciation) was my very first premium purchase, of which I am proud, even though I have little to no Polish blood. Their history of Catholicism also made them a fun choice in everything from Medieval: Total War II to the Europa Universalis series...but of course that's a far cry from piloting a destroyer. (although true enough, they are a rather tough country to play in Hearts of Iron)

Here are two good books about the battle :)

this was good book, and a good portion of it is about the pushback of the europeans after they win the siege.
http://www.amazon.com/The-Enemy-Gate-Habsburgs-Ottomans/dp/046502081X