Reddit reviews The Enigma of Capital: and the Crises of Capitalism

We found 8 Reddit comments about The Enigma of Capital: and the Crises of Capitalism. Here are the top ones, ranked by their Reddit score. 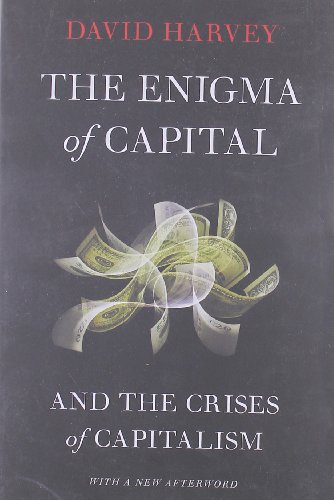 8 Reddit comments about The Enigma of Capital: and the Crises of Capitalism:

yes, but who built the machines? this is why marx says that capitalists fetishize technological innovation.

yes, the idea is that labor is the only commodity available in the market which produces surplus value. Value, in marx, is defined as 'socially necessary labor time.' one should never lose sight of this definition and confuse value with either the money form of capital or which capital sui generis.

also, let us look at the reason why machines do not produce (absolute) surplus value, but only relative surplus value. machines, again, are commodities and as such are available to the market (or at least portions of it). Let us assume a certain business invests in a $25,000 machine which will eliminate several jobs, saving the company $50,000 a year. wow, thats really great, now the company can be more competitive with their pricing or, at the very least, will have a greater surplus this year. but what happens when this company's competitors start investing in these similar machines, and start undercutting our hypothetical company's profit margin. well now we see that the surplus value that the machine created was really only relative to that singular company. over time, as the machine or technological solution (or new organizational structure, or new process, or new space....) becomes the norm of the industry, the surplus value diminishes and it becomes an assumed cost of doing business.

marx again is making a class or macro-economic argument here: he does not care too much about singular capitalists making larger profits (he does in the sense that they are useful for his data on capitalists society), he is concerned with how a class of persons is able to exploit another class. within the capitalist class, yes, some are able to gain a better competitive advantage over other capitalists by being the first to utilize the latest technological achievement; however, that advantage will either spread to the entire industry as a commonplace necessity, or the company will begin to monopolize the industry.

labor as a surplus value producing commodity is useful for the entire capital class over the working class. it is the law of economics in general that labor must produce and it is the only thing capable of turning raw (or semi-raw) materials into use values. it is the law of capitalism that to produce a profit one must hire workers at a salary less than the sum of your revenue.

i would suggest reading some david harvey. he is a contemporary and really does a fantastic job at explaining marxism for the 21st century. i suggest either a companion to marx's capital vol i or the enigma of capital. the former address your question specifically in chapter 6 'relative surplus value'.

let me know if any of this is unclear or if you would like to discuss further. cheers and happy new year comrade.

&gt; You're confusing the idea that market failures are evidence of capitalism's failings.

I stole the idea from someone much smarter about these things than me: https://www.amazon.com/Enigma-Capital-Crises-Capitalism/dp/0199836841/

Posner, a strong supporter of free markets, identified the financial crisis as a failure of capitalism, not government intervention: https://en.wikipedia.org/wiki/A_Failure_of_Capitalism#Criticism_of_capitalism_and_mainstream_economists

&gt; the whole process was only able to happen because of the governments policy, not because of capitalism.

I think it's foolish to try to separate the two, given how deeply the financial industry and it's ruling capitalism class have dug their claws into all governments.

It really depends on what kind of take you're looking for: Stiglitz's Freefall is a pretty mainstream account, David Harvey's The Enigma of Capital gives a macro view based of Marxian analysis, and if you're looking for more of an investigative/up close telling, Lewis's The Big Short is a good read.

A People's History of the World

Marx for our Times

The Meaning of Marxism

The "S" Word (not that good in my opinion)

Imagine: Living in a Socialist USA (again didn't like it very much)

The Socialist Party of America (absolute must read)

The Enigma of Capital

Seventeen Contradictions and the End of Capitalism

After Capitalism: Economic Democracy in Action

The United States Since 1980

The End of Loser Liberalism

Capitalism and it's Economics (must read)

Economics: A New Introduction (must read)

U.S. Capitalist Development Since 1776 (must read)

Kicking Away the Ladder

23 Things They Don't Tell You About Capitalism

How Rich Countries Got Rich

The Bubble and Beyond

Finance Capitalism and it's Discontents

How the Economy was Lost

We Are Better Than This

Spontaneous Order (disagree with it but found it interesting)

The Machinery of Freedom

This is the Zodiac Speaking (highly recommend)

I've heard really good things about Heinrich's Introduction to the First Three Volumes of Karl Marx's Capital. I just picked it up the other day, but I haven't read it quite yet.

Otherwise, you should check out the link to David Harvey's video series (found in the sidebar). Or, for a contemporary application of Marx's theories, Harvey's Enigma of Capital is a worthwhile read.

&gt;Capitalism doesn't need to "grow" at all.

Since I can't take your argument seriously after this point, I'm just going to suggest that you read something like David Harvey's The Enigma of Capital to expand your conception of how capitalism functions.

Andrew Kliman wrote a book on it. David Harvey also wrote a book on the last crisis. I would recommend reading both as there is currently a debate between them, and among Marxists in general, about what the underlying causes of the last recession were.

&gt;I stole the idea from someone much smarter about these things than me:
&gt;
&gt;https://www.amazon.com/Enigma-Capital-Crises-Capitalism/dp/0199836841/

Well I completely disagree with this marxist geography professor's idea. Once again, to me the problem is central banking, government intervention, and Keynesian economics.

&gt;Posner, a strong supporter of free markets, identified the financial crisis as a failure of capitalism, not government intervention: https://en.wikipedia.org/wiki/A_Failure_of_Capitalism#Criticism_of_capitalism_and_mainstream_economists

While we'd need to read the book or youtube him to get his full argument, that section of the Wikpedia is actually supporting my stance!

Posner says that what Bernanke and Greenspan (ex-chairmen of the Federal Reserve, Americas central bank) "can be blamed for is overconfidence in their understanding of how to prevent a depression and, as a result, a failure to attend to warning signs and a lack of preparedness ". This is exactly my point, these people are central bankers who follow Keynesian economics, their view of economics and economies make them BLIND to such events and their solutions. They believe that in their wisdom and in their control of monetary policy they can create growth and stop recessions.... they can't! They think they are the solution, but they are the what caused the problem!

"A few people had warned of problems but they were ignored". Anyone who isn't a Keynesian could see the real estate bubble. These people got laughed at, infored and made a mockery of. It's just that these people are a minority compared to the gigantic culture of Keynesian economics which has overtaken our universities, the media, and our governments. Keynesian economics tells a government they can spend big (this will keep them and their voters happy), in turn governments fund research that supports this view. This is a mutually beneficial relationship.

It isn't capitalism that is the problem. Capitalism is great.

If you'd like to read more about Austrian economics can read/youtube/google anything from: The Mises Institute, Michael Pento, Peter Schiff, Saifedean Ammous, James 'Jim' Rickards