We found 24 Reddit comments about The Necronomicon. Here are the top ones, ranked by their Reddit score. 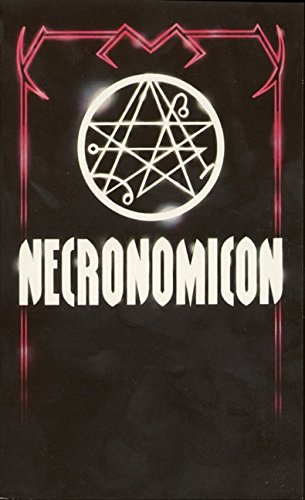 Weird is subjective. Everyone is a little 'weird', we all have our picidillies that someone somewhere would find odd. To me some of the weirdest folk I've met are the ones that are obsessed with normalcy.


It's my guess that this particular dude feels very powerless. He's probably alone and has no friends, so he does what a lot of folks do in this situation, they go inside their head and think so much until their hopes, fears, and perceptions of the world and the relationships they have become delusional obsessions. To right the wrongs they feel the world has (or the wrongs done to themselves), many turn to a doctrine or system where they feel like they can gain control. Religion is one example, especially cult like ones with lots of dogma, but it can be anything really. This dude opted to focus on the occult. He's probably read a lot of books, and the photos he's taken indicate he's looking to gain fear and respect via 'shocking images'. The drawings on the ground look like veve imagery, or maybe some crap from the Necronimicon (which was written as a joke btw) but he's definitely not apart of Voudo (voodoo) or any occult group or alternative religion I know of. He may even believe in what he's doing, if so he's not much different than those Appalachian churches that dance with snakes and drink poision, except he's being public. One thing fosho he ain't no Alister Crowley. At least he wrote some decent poetry.

Anywho, shit like this is what happens when people face a lot of rejection and are alone, and they either further isolate, but a clue and grow out of it, or try to become their own brand of cult leader &amp;amp;amp; continue to try to impress people.

… still though, just a guess


Source: I know of a lot of weird crap

Less than five bucks, what a bargain.

I would guess it's because it's a fictional book. Unless you mean this, which is just a mashup of religious and occult fabrications.

It could go right next to my Necronomicon! Nothing ever worked out of that book either...or any of the other 10 or so "magick" books I have.

Sure, you can grab a copy for yourself.

For a tome that threatens to unmake reality itself, the Men of Science at Miskatonic University have been pretty loose with the reprint rights.

The Necronomicon wasn't written by Lovecraft, he mentions it in several stories but other publishers capitalized on it by releasing their own versions of "The Necronomicon". He did write History of the Necronomicon but you're probably talking about this one.

Ishmael (and the rest of the series) by Daniel Quinn opened my eyes in my senior year of high school.

It's about a Gorilla, who has lived beside man for a number of decades and teaches a pupil through stories and analogies about how we are already at the cusp of civilization collapse. It's about a lot more than just that, namely the relationship of humans, animals, the planet, and how humans have a unique, egotistical view of themselves where we deemed ourselves rulers of the planet.

Confessions of an Economic Hitman by John Perkins is an eye opener as well.

Magicians of the Gods by Graham Hancock.

I also really enjoyed the Myst series by Rand &amp; Robin Miller (the books the game is based on). It's about worlds within worlds and an ancient race of authors creating worlds through magical ink and books (sci-fi/fantasy).

Can you even get this book?

I guess you can buy it, and btw the comments on this book are hilarious.

If the occult counts as creepy.
Necronomicon

When teens show me their new scary book, I like to flip to the publisher's page and show them it was published by Avon.

Then I try to turn them on to Lovecraft himself. So is the script for The King in Yellow appropriate for Scottish Rite?

It doesn't matter anyway. It wasn't a real ritual lol. It is a bunch of stuff from https://www.amazon.com/Necronomicon-Simon/dp/0380751925 this book, released in 1977 that is a just a hodgepodge of random crap Simon thought sounded metal.

I cannot speak from experience, but there seems to be quite a few people out there who are working with the Cthulhu mythos and are writing books for people to do the same.

A few that immeditately come to mind are Donald Tyson and Kenneth Grant. And of course there is the Simon Necromonicon, which some people claim to be a legitimately effective magical text.


It does lack being bound in human skin and authenticity and such...

I tried to make mine all from Amazon for the fun of it! It's not finished

A poster of the Texas Chainsaw Massacre


candy corn (because it's delicious)


A mask of any kind

The children from the Village of the Damned


Any kind of monster of any kind


A person in a Halloween costume of any kind

A Blacula or a black vampire

A picture of one of these characters. Count chocula, Boo-Berry, Frankenberry, Yummy Mummy, or fruity brute.

A picture of The Undertaker

A picture of Sam from trick or treat

There was a guy back in the 70s, I think, who wrote a "real" Necronomicon based heavily off Sumerian mythology, with references to Marduk, Ishtar, Nyaralathotep, etc.

It's actually kind of a fun read if you're into that kind of thing.

And now that we're talking about it, you may look at kabbalah and Chaldean Christianity. They're like sister mysticisms to the Key of Solomon and get into Zoroastrian ideas as well and early Arabic demonology, with jinn and other spirits.

It's kind of interesting stuff. I found this, which may be dense, but might help:

It's a real book