Reddit reviews The Only Thing Worth Dying For: How Eleven Green Berets Fought for a New Afghanistan (P.S.)

We found 7 Reddit comments about The Only Thing Worth Dying For: How Eleven Green Berets Fought for a New Afghanistan (P.S.). Here are the top ones, ranked by their Reddit score. 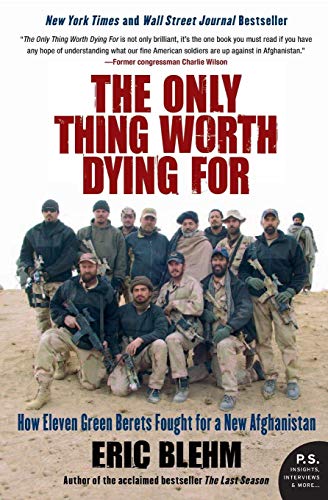 7 Reddit comments about The Only Thing Worth Dying For: How Eleven Green Berets Fought for a New Afghanistan (P.S.):

The Only Thing Worth Dying For: How Eleven Green Berets Fought for a New Afghanistan

Its pretty good. I Agree that he made the correct choice. He was not told that the mass casualty was Blue on Blue. He had to assume that it was an enemy attack. The battlefield situation gave him no other logical conclusion than it was a diversion. Note he also sent a CH-53 cas-evac. He just refused to send ALL his air assets into an a scenario with so many unknowns. People who criticize this forget to mention that the SF guys that tried to get him too did not tell him that it was blue on blue. Giving them the benefit of the doubt that they didn't know it was, Mattis made the decision based on the information he was given. I do have a tough time believing that the SF team didn't know as they were the ones calling in the mission and should have been able to put together that at the exact same time they got hit by a 2000 lb JDAM, a 2000lb JDAM should have hit a target they were observing.

I'm not a veteran, but I'm a historian (hah!) and most of my best friends are combat vets from various conflicts. I just spent a couple hours on the phone the other day with a young soldier currently in Afghanistan whom I've known since he was a kindergartner. He was back in for testing after having been in his 4th IED strike in 4 months, thankfully there's no evidence of TBI in his particular case. Anyway---what we talked about that is echoed by most of my friends and everything I've read:

We are winning the war in terms of casualties inflicted. We are losing the war financially and in its effect on American livelihood. We're fighting ground war in a place with literally nothing to lose---infrastructure wise. We're fighting with ROE and IROW that don't allow us the ability to "play dirty." I mean, we ARE playing dirty with news of double-tap drone strikes and such, but we don't plant IED's any more and we don't plant mines any more and we assume financial responsibility for material and personnel damage if we can't prove it was Taliban held.

For example, my young friend's MRAP was hit the other day---nobody was killed but ~20k damage was done to the vehicle. That damage was done by a $10 IED, and that damage doesn't include the cost to roll out the QRF and reallocate surveillance resources to secure the area.

There's a steady stream of Pakistani, Syrian, Yemeni, and now apparently Chechen and Iranian mercenaries and jihadists flowing across borders we can't lock down, and then fleeing back just like the NVA did with Laos in Vietnam.

I've read so many Afghan books recently that I can't keep them straight, but one was by a Non-traditional Warfare CO who was part of the first SF group to deploy to Afghanistan with a few days of 9/11. It was Eric Blehm's "The Only Thing Worth Fighting For."

Anyway, in the book, he believes that if Green Beret's and other NTW troops had been allowed to continue their mission (which was basically to rally native peoples support around Karzai and bring him to power internally without a major military operation), that the overall events of the war may have gone down differently. He makes very clear in the book that the CIA was given a LOT of power early on, and that folks like Cheney really just really really wanted a major military operation, and how that pretty much messed everything up.

Regardless, Afghanistan is an area that has never been conquered by an invading army, and presents such a very unique challenge between warring tribes (lots of tipsters are actually just playing back old vengeance debts to other clans, sometimes generations old), geography, and tradition that it's doubtful that, short of leveling it all and starting over, there will ever be a unified system of government or peace amongst the peoples.

In addition to Horse Soldiers, you might want to check out

Not a Good Day to Die

The Only Thing Worth Dying For

You won't find much about modern CIA operations because they are classified.

The Only Thing Worth Dying For