We found 5 Reddit comments about The Return of Depression Economics and the Crisis of 2008. Here are the top ones, ranked by their Reddit score. 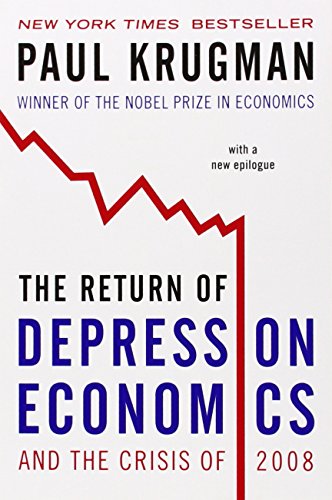 5 Reddit comments about The Return of Depression Economics and the Crisis of 2008:

Economics is a pretty broad subject, is there anything in particular you're interested in? I'll list some sources that I find interesting and that have spurred my interest in economics.

Can't believe no one has suggested Krugman's book.

Big Short and Margin Call might be exciting. But this provides a deeper understanding of how crises evolve and how monetary policy affects them.

Bonus: Why Stock Markets Crash. Won't help directly with investing, but offers a fresh perspective on how to think about financial crashes.

This is a paper-thin treatment of the Argentine devaluation and currency crisis. There's no real attempt to explain the causes beyond handwringing about irresponsibility and globalisation. To be sure, the South American currency crisis wave is complex and many things exacerbated it but in Argentina's case I believe the lion's share of the problems can be attributed to it's government's dogged persistence in keeping its currency pegged to the US dollar. This initially led to lots of US investment and goods coming into Argentina cheaply, however when the wider South American crisis hit, Argentina found itself with a massively overvalued currency which made its exports impossibly expensive and meant that imported goods were much cheaper than anything the Argentines could hope to make domestically.

Even the author's vague, bet-hedging statement that "The one thing
everyone agrees on, however, is that there is no easy fix." becomes laughable within a few months of the publication of this article. After a sudden shock right after the devaluation, Argentina experienced a huge surge in growth driven by a boom in exports facilitated by the currency devaluation (GDP growth was 8 or 9% for years from 2002, more than making up the lost output).

There is a cautionary tale in Argentina's crisis, but it's one about the folly of attempting to maintain a fixed exchange rate (in Argentina's case, with the US dollar) and the economic depression that can result. If anybody wants to understand what's driving the Eurozone crisis right now, then you can do a lot worse than looking at Argentina and the practical difficulties it had devaluing its currency without everybody trying to convert it to US dollars first. Krugman's Return of Depression Economics, while updated with a new chapter in 2008, is a 2000 book about the wave of international currency crises in the 1990s which manages to be both detailed and accessible to the non-economist (Krugman-haters can quit their bellyaching too: international currency crises are absolutely a field which Krugman has a major academic specialisation in).

&gt; It's the reason why under his time in office we had the worst economic recovery since WWII.

Again, this seems like a great talking point if you don't actually understand how economics works. The Obama recovery was practically the best possible scenario. What you're describing is the amount of time it took to return the economy to pre-recession growth rates. When you consider that the recession was in many ways actually worse than the great depression on an economic scale and multiple nobel prize winning economists defined it as a depression, not a recession, it actually becomes a credit to the Obama presidency. Obama actually had one of the best economies and economic policy models of recent presidents. Thats not just me saying that, thats even the right leaning bloomberg..

&gt; You also contradict yourself in your post by first stating that the President doesn't have much influence over the economy and then stating Trump could take a recession and make it a depression.

I believe if you read again what I wrote you'll find what I actually said was:

&gt; People in general believe the President influences the economy much more than they actually do...