We found 3 Reddit comments about The Smart Growth Manual. Here are the top ones, ranked by their Reddit score. 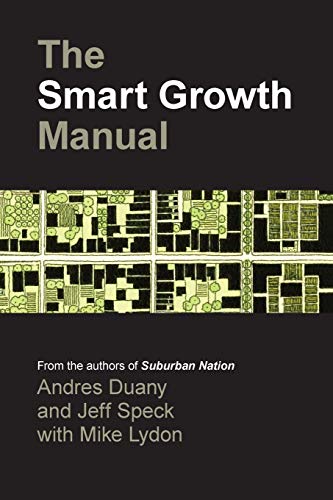 I totally love the Christopher Alexander books. Definitely check out his The Timeless Way of Building which is a great companion piece to A Pattern Language. You should know that his works, while great in my opinion, are sort of considered idiosyncratic and not really in the mainstream of architecture/urban design.

Here's a short reading list you should look at:

The Smart Growth Manual and Suburban Nation by Andres Duany &amp; Jeff Speck. Another set of sort-of-companion works, the Manual has a concrete set of recommendations inspired by the critique of modern town planning in Suburban Nation and might be more useful for your purposes.

The Death and Life of Great American Cities by Jane Jacobs is probably the most famous and influential book on city planning ever and contains a lot of really original and thoughtful insights on cities. Despite being over half-a-century old it feels very contemporary and relevant.

The Geography of Nowhere by James Howard Kunstler is similarly mostly a critique of modernist planning principles but is both short and very well written so I'd definitely recommend checking it out.

Makeshift Metropolis by Witold Rybczynski: I can't recommend this entire book, but it does contain (in my opinion) the best summary of the history of American urban planning. Really useful for a historical perspective on different schools of thought in city design over the years.

The High Cost of Free Parking by Donald Shoup is the book on parking policy. It's huge (700+ pages) and very thorough and academic, so it might be harder to get through than the other, more popular-audience-oriented titles on the list, but if you want to include parking as a gameplay element, I really can't recommend it highly enough. It's a problem that's thorny enough most city games just ignore it entirely: Simcity2013's developers say they abandoned it after realizing it would mean most of their players' cities would be covered in parking lots, ignoring that most actual American cities are indeed covered in parking lots.

Finally there's a bunch of great blogs/websites out there you should check out: Streetsblog is definitely a giant in transportation/design blogging and has a really capable team of journalists and a staggering amount of content. Chuck Marohn's Strong Towns blog and Podcast are a great source for thinking about these issues more in terms of smaller towns and municipalities (in contrast to Streetsblog's focus on major metropolitan areas). The Sightline Daily's blog does amazing planning/transpo coverage of the Pacific Northwest. Finally [The Atlantic Cities] (http://www.theatlanticcities.com/) blog has incredible coverage on city-issues around the world.

I hope this was helpful and not overwhelming. It's a pretty big (and in my opinion, interesting) topic, so there's a lot of ground to cover even in an introductory sense.

Andres Duany is an authority in American urban planning that has strongly influenced my perspectives on all of this. He co-authored one book that explains how we got into this mess (Suburban Nation), and another that gives a good overview of what we should do to fix it (Smart Growth Manual). The first is full of good, hard facts and data to back up the claims he makes in the book. Both can be purchased for about $25 on Amazon.

A Jacksonville, Florida newspaper also did a very good comparison of exactly how cheap a streetcar system could be constructed (The Little Rock River Rail) with the bloated inefficiencies that stemmed from the overenthusiastic plans for a tram in Jacksonville (that still hasn't been built).

Here's a list of rail transit systems in the US if you want to compare and contrast. I figured you might find it interesting.

Houston is a good example of what happens when we fail to distinguish 'good' growth from 'bad' growth. I always joke about how suburban Houston follows a template of a Kroger, and HEB, a Walgreens and Super Target that seems to be stamped onto the landscape at every major intersection. Its hard to imagine converting the mess into more urban communities, but if we use these clusters of commercial development to anchor higher-density residential growth along the edges that are tied together with designated pedestrian and public transit corridors, we will free up large quantities of land to further intensify development when parking areas are no longer needed and when big-box stores reach the ends of their life cycles (which usually top off at about 25 to 30 years). Remember that most commercial growth in suburban areas is, more or less, disposable. We can use this to our advantage to allow redevelopment to take place in an orderly and incremental manner.

The development of pedestrian corridors is not as expensive and complicated as you would think. The biggest problems are the single-use development patterns and the meandering streets that developers use to create a sense of depth to the subdivisions. In suburban areas, the house located behind yours may be over a mile away by road. The good thing about pedestrian corridors is that they don't really require large rights of way and they can be squeezed into areas where roads can't be (between houses). Geographically, most homes in the suburbs really aren't that far away from activity centers (as I like to call them), but the collector/distributor road systems employed can turn that short trek into a very time-consuming ordeal. If pedestrian corridors could offer a sort of short-cut to these, the time required to walk somewhere could compete with the time required to drive there. Once you get people moving on their feet, you'll really start to see changes to the landscape.

Within suburbia, I think the areas in close proximity to activity centers will enjoy the best chances for survival in the future. I think that the rest of the periphery will turn into less-desirable and low-income areas. But the saving grace in all of this is that household sizes in poor areas are usually larger than those in more affluent areas, so my prediction is that density in suburban areas may actually increase with an influx of poor people being pushed out from gentrifying inner-city neighborhoods. And since the reliance on public transportation would be carried with them, I think an increase in transit use in suburban areas would follow as well. So in the end, the urban shake-up may actually have the unintended consequence of dramatically improving the efficiency of the suburban landscape, but that's just my opinion.

Because this is such a HUGE topic, check out my other posts on this thread for some additional ways we could further modify these areas to make public transit and pedestrianism more viable. Sorry it took me so long to respond to your post. Let me know if you want me to clarify anything further.

I won't, but I will give you several sites and subreddits you should check out.

Congress for the New Urbanism

Here are also some good book recommendations (links to Amazon pages), many you could probably find at a local library:

A Better Place to Live: Reshaping the American Suburb by Philip Langdon

The Architecture of Community by Leon Krier

The Death and Life of Great American Cities by Jane Jacobs

The Image of the City by Kevin Lynch

Suburban Nation: The Rise of Sprawl and the Decline of the American Dream by Andres Duany

History of Urban Form Before the Industrial Revolutions by A.E.J. Morris

The Language of Towns &amp; Cities: A Visual Dictionary by Dhiru A. Thadani