We found 3 Reddit comments about The Unfolding of Language. Here are the top ones, ranked by their Reddit score. 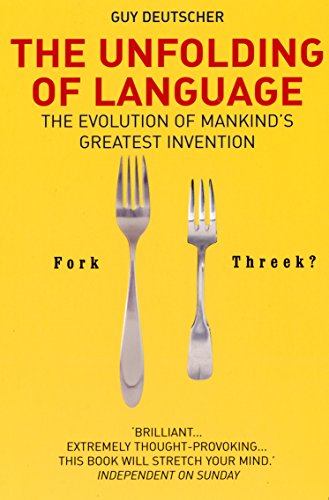 /r/linguistics could help you better with the theories on the origin of language. They'd probably have all the latest news on which origin theories are currently popular in academic circles, too.

As for how we get languages as different as Japanese and English today, I can help a bit with that. The only constant thing with language is that it's always changing. Words and phrases go in and out of fashion ("Gee, that's swell!"), words start changing their meaning ("discover" originally meant to literally remove the cover from something), pronunciation changes (check out the Northern Cities Vowel Shift; the "Minnesota" accent didn't exist 100 years ago), words are borrowed from other languages ("That is so kawaii!"), grammar changes ("whom" useage is slowly fading in America), etc. Check out this excerpt of "Beowulf," from about 900 A.D., written in Old English:

Looks pretty different, right? That's 1,000 years of language change right there (brought on by Celtic/Anglo-Saxon relations, Viking invasions, Norman invasions, and your standard language changes that would've happened anyway without anyone invading to begin with) - and we know that language has been around for a lot longer than 1,000 years!

The interesting thing about Japanese is that a lot of linguists think it's a language isolate (meaning that it doesn't seem to be related to any other language on the planet; it's possibly related to Korean, but that's being hotly debated.)

This is where guesswork starts coming into play. Do all languages have a common origin? If so, it could just be that because of the lack of documentation of spoken language, we just don't have enough data, and English and Japanese are actually (very distantly) related, and language change over thousands of years has just made the two languages completely different. Or, is it possible that language could have sprung up around the world in different places at the same time? If that's the case, English and Japanese could literally be completely unrelated, and the ancestors of the speakers of Japonic languages had a markedly different way of approaching language than the ancestors of the speakers of Proto-Indo-European (English's language family). Again, if you want to stop by /r/linguistics, they might have more information on which theory is currently considered most likely.

You might also be interested in The Unfolding of Language, by Guy Deutscher. Here's the summary from Amazon:

&gt;‘Language is mankind’s greatest invention — except of course, that it was never invented.’ So begins this enthralling investigation into the evolution of language. Given that no-one sits down to design languages, how did there come to be so many, and of such elaborate design? If we started off with rudimentary utterances on the level of ‘man throw spear’, how did we end up with sophisticated grammars, enormous vocabularies, and intricately nuanced shades of meaning?

&gt;Drawing on recent, groundbreaking discoveries in modern linguistics, Deutscher exposes the elusive forces of creation at work in human communication, giving us fresh insight into how language is formed, evolves, and decays. He traces the emergence of linguistic complexity from an early evolutionary ‘Me Tarzan’ stage to the astonishing power of languages today, with their capacity to express even the subtlest thoughts and ideas. From the written records of lost civilizations to the spoken idiom of today’s streets, we move from ancient Babylonian through medieval French to the English of the present. We marvel at the staggering triumph of design that is the Semitic verb, puzzle over single words that can express highly elaborate sentiments, and learn how great changes of pronunciation may result from simple laziness. Through the dramatic story of The Unfolding of Language, we discover the genius behind a uniquely human faculty.

Ha, my Mum was an English teacher and has retired now. So by that you can guess her age. After reading http://www.amazon.co.uk/The-Unfolding-Language-Guy-Deutscher/dp/0099460254 she is convinced that the subjunctive will die out soon ;w;.

I must admit, when I see official documents get it wrong, it grinds my gears hahaha.